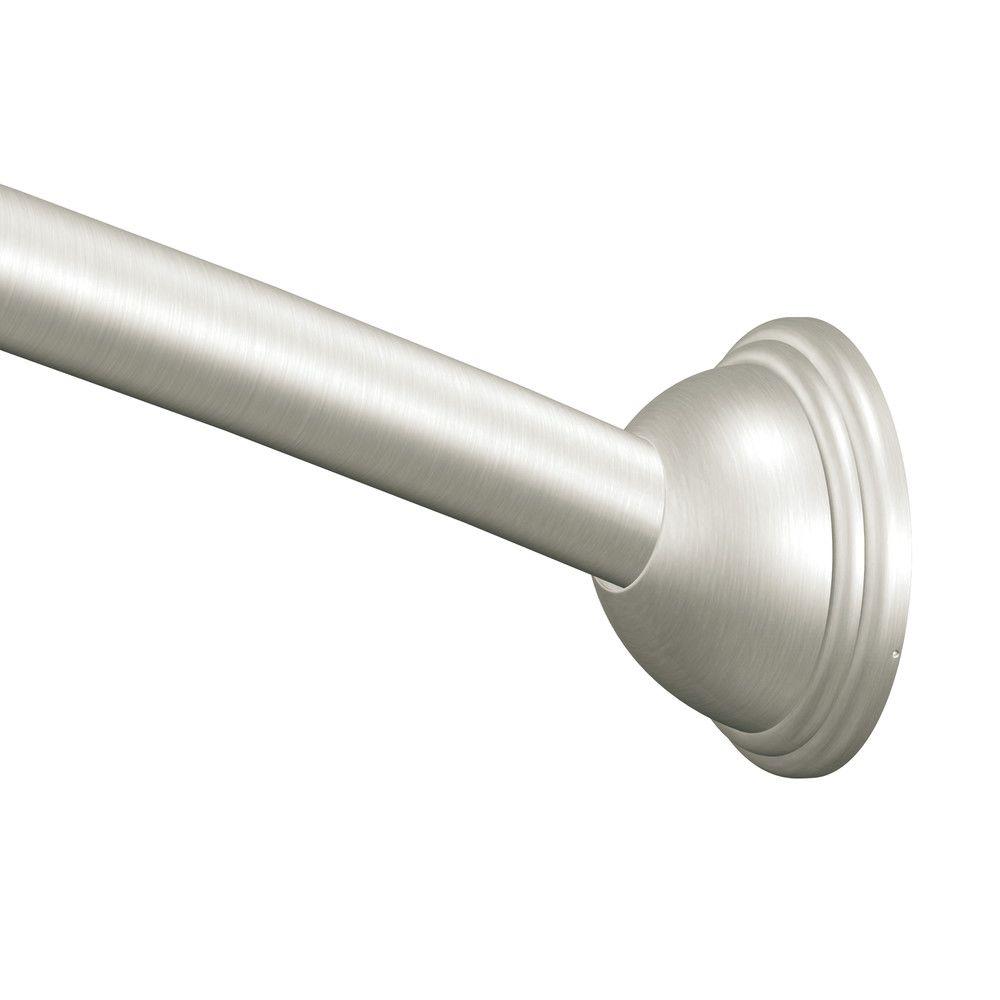 From finishes that are guaranteed to last a lifetime, to faucets that perfectly balance your water pressure, MOEN sets the standard for exceptional beauty and reliable, innovative design. Add an elegant and luxurious look while also creating a more comfortable experience in the bath with Curved Shower Rods. The included decorative covers offer an additional stylish element while helping to conceal the mounting hardware.

Hello JoannaG and thank you for your interest in Moen products. The Moen CSR2160CH and DN2160CH are the same. One is a "wholesale" number where the packaging may be plain packaging versus a the "retail" model with packaging that could be displayed on a store shelf. If you have additional questions, please call us at 1-800-289-6636; we are available Monday through Friday from 8:00 am–7:00 pm Eastern Time.

Does the curved rod use compression to stay in place? The video shows using screws to mount the ...

Holes will need to be drilled in order to mount this shower rod.

Will the hose scratch my tile wall?

No it does not scratch the shower wall tile. It is a smooth metal hose.

Is the shower head made of metal or plastc?

The majority of pieces to this shower head is plastic. The connections to water supply are also plastic. This shower head is lightweight due these plastic components. I installed it because I had a spouse that was ill and steadily becoming less mobile. This show head made it possible to shower easily and with very minimal weight to the shower head.

Does Moen have hose extender orva longer hose set up

I am disabled and had a handicapped shower installed that has a seat bench at the far end of the shower, so my plumber took the hose off another showerhead and put a coupler on to connect the two hoses together and now I have 7-8 feet of hose. Makes showering so much easier.

How do you remove the water restrictor? Where is it located? I don’t have the directions anymore ...

I googled "how to" when I did mine, very easy. In the shower head, where hose connects, a ring, I believe it was black. Used tweezers, came out easily, and now I have wonderful water flow!

Can I buy a handle, sink faucets, lights and accessories that match the Magnetix hand held shower...

I don't think so, but not sure. My faucets and light are all Brushed Nickel finish, that is how I matched everything including the shower curtain rod. As for this particular shower head, I am very glad I got it. I don't have one complaint about it. The selections on the different types of flow are great! I don't even use them all, I have my favorites. I love the strong magnetic hold, no fighting to try and get it into a bracket. Just raise it up, make contact, the magnet does the rest. Hope my answer helps.

What tub spout and control and diverter will work with this in a bathtub/shower setting? I prefer...

Any diverter will work. It simply replaces the original shower head. Great product. I have one in my master bedroom shower.

How can you remove the Water Saver device, if the pressure seems too low?

I used a tweezer to pull out the silver retaining clip and then the plastic water saver disc as well.

I have this adjustable curved rod and these exact omen roller shower hooks. The problem is it do...

Hello Pam and thank you for your interest in Moen products. The Moen 72 in. Adjustable Length Curved Shower Rod Set in Old World Bronze does have a connector piece that joins the two rods together. You can contact Moen directly under the products Lifetime Limited warranty. Moen’s Consumer Services department is here to provide assistance and we would be delighted to work with you to address the issue you described. Please feel free to call us at 800-289-6636; our current business hours are Monday through Friday from 9:00 am - 5:30 pm (Eastern Time).

Very Easy Install, Unusual Spray Patterns
September 11, 2015
Quality :
3
Value :
4
Ease of installation :
5
Seeds Program Review
(What's this)
The Moen 6-spray handheld shower head is an attractive product and it was so extremely easy to install. The instructions were very clear, and everything is hand-tightened, so no tools are required for installation. The product comes well packaged, no damage. The pieces fit together very easily. If your shower head pipe doesn't already have pipe tape, I recommend using it on the wall pipe to ensure no leaks. Installation is four basic steps: hand tighten the piece that fits onto the wall pipe, twist the hose onto the that piece now attached to the wall pipe, twist the hose onto the shower head, and then pop the shower head into place. The magnetic attaching mechanism works great! And really, it took no more than 5 minutes, including taking the product out of the packaging. After installing, I decided I didn't like it, so I took it back to my old house and swapped it for the other handheld shower head that I previously used, and it took no more than five minutes to both uninstall and reinstall. Kudos to Moen for that! This product did not work well for me for two reasons. (1) The pipe from the wall in my new place was angled very low against the prefab shower, which forced the Moen showerhead to be very straight up/down so the water spray was nearly against the far wall rather than down into the tub. (2) There are 6 different sprays on this shower head, and personally I didn't care for any of them. I like a nice strong spray that doesn't sting and doesn't spray too widely. This head has an outer ring and an inner ring of spray, and using just the outer ring did not seem to provide a strong enough flow of water, and using just the inner spray felt like I was getting hosed down…it was a very concentrated stream of water reminding me of the flow of water from a garden hose. Combining the inner and outer sprays didn't really appeal either. I also noticed that many of the parts did not seem to be metal…since Moen has a lifetime warranty for the original purchaser, that didn't concern me. But you need to be conscious of that so you don't over tighten and crack the parts.
Pros: Easy to Install
Cons: Weak Water Pressure, spray patterns didn't appeal
Was this helpful?
20
0
BriBri
Tampa, FL

Attractive handshower with some issues
June 8, 2015
Quality :
3
Value :
4
Ease of installation :
5
Seeds Program Review
(What's this)
This handshower is very easy to install, is attractive and works well. But it does have one area that I believe is a bit of a design flaw. The hand shower is only connected to the upper bracket via a magnet, which makes removing and replacing the handshower easy, but also allows it to easily fall from the bracket and then clank around the tub and spray water every which way until you can get ahold of it. The most obvious area where this can be a problem is if you want to adjust the position of the bracket so the handshower sprays to a different area, such as if multiple people use the shower, each one a different height, and each one wants to adjust where the spray goes when the handshower is attached to the bracket. Where a typical waterpik handshower fits in a clasp bracket, where you can grab the entire bracket and handshower w/ one hand, the design of this model requires you to use both hands to make sure the handshower doesn't get knocked from the magnet while trying to adjust the angle of the bracket. The only other complaint is that when installing the parts and reading the instructions, it says there are 3 washers that need to be installed w/ pictures indicating similar, but there were only 2 attached to the hose. I didn't think much about it and used the first of the 2 to attach the bracket to the shower arm, but then realized there was only 1 left and you needed 2 to attached to each end of the shower hose. No where in the instructions did it indicate that one of the 3 washers was preinstalled, but one of the highlights on the outside of the box did state this. So, I went up to the hardware store and purchased an additional washer for a couple of dollars because I didn't want to wait for Moen to ship another one. Only later when getting ready to throw the box away did I notice that it indicated 1 washer was preinstalled. Therefore, I guess there are actually 2 washers being used to attach the bracket to the shower arm. But the model operates fine, provides 6 different sprays patterns and looks good with the other parts of the shower that are brushed nickel. Therefore, also note, if you need a tub spout, handle to adjust water, etc. (basically a complete shower kit) this will not work, as this only provides a shower head, for when you want to upgrade an existing shower head.
Pros: Easy to Install, Strong Water Pressure, Looks Great, Stylish
Cons: design
Was this helpful?
14
0
Erick
Miami, Fl

Innovative, but weak water pressure
May 27, 2015
Quality :
4
Value :
3
Ease of installation :
5
Seeds Program Review
(What's this)
The shower head has great potential. Installation took only a few minutes and did not require any tools. During use, there's no need to fumble with getting the sprayer on a mount - it hangs up and pulls off real easy from the magnetic mount. The push button mechanism to switch patterns is also great and easy to use. In the looks department, the shower head and hose look good. Like most things nowadays, they're some kind of plastic, but feel pretty sturdy. The magnetic mount is a dull gray and kind of kills the look. Not a big deal for me, but its something to consider. My main issue with it is that the water pressure out of it is pretty low when using some patterns which required a higher flow rate (using the middle nozzles and the outer ones). At first I thought it was an issue with that particular bathroom, so I swapped it with another unit in a second bathroom (which provides strong pressure from all patters), but nope, the water pressure out of it was pretty weak. I even removed the mesh screen inside to no avail. All in all, its a decent shower head. I'm just very limited as to what patterns I can use due to the weak water pressure.
Pros: Easy to Install, Looks Great, Modern
Cons: Weak Water Pressure, mount finish is a dull gray
Was this helpful?
4
0
Panaman
Lebanon, Ohio

easy on easy off
May 4, 2015
Quality :
4
Value :
4
Ease of installation :
5
Seeds Program Review
(What's this)
This shower head wand has 6 different settings. The nice part is all you have to do is push a button to rotate through the spray settings. It has a nice variety of spray patterns and good pressure. The magnet is strong and makes it easy to re-attach to the holder. The spot resist works well. My only complaint would be that it is made entirely out of plastic.
Pros: Easy to Install, Looks Great, Modern
Cons: plastic
Was this helpful?
7
0
Review this Product
Share your thoughts with other customers