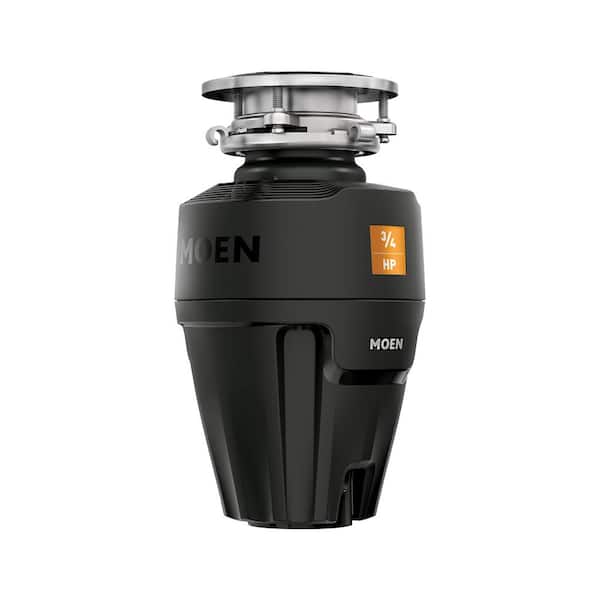 Moen created The Host Series of garbage disposals for homeowners who love to entertain and want cleanup to be a breeze. Built with a streamlined design and a powerful, high-speed motor, The Host EX75c cleans up foods like small fruit pits, banana peels, small bones and cooked meats. The Host EX75c installs easily on most existing 3-bolt assemblies and is backed by a 10-year limited warranty with in-home service.

69
Filter by:
Showing 1-10 of 2,149 reviews
Jan 6, 2022
Terrible!! Don’t buy it!!
I had my garbage disposal for two years and it stopped working already. It’s also noisy. I called Moen and they sent me another one. I paid a plumber to install it and I am realizing they sent me garbage disposal with only 1 horse power. So disappointing!
by
Response from Moen Plus SupportJan 10, 2022
Hello Marj and thank you for the feedback you posted on the Home Depot website regarding the Moen Host Series ¾ HP Continuous Feed Space Saving Garbage Disposal. We are sorry to hear that the disposal that was sent out under warranty was not the horsepower you expected. Our Product Specialists are available for further technical/warranty assistance. We can be reached at 1-800-289-6636 Monday through Friday from 8:00 am – 7:00 pm Eastern Time.

1 found this review helpful
Dec 19, 2021
Easy install
All i had to do was unscrew the old 1, Kenmore, and screw this 1 on. I believe that's what is meant by universal mount. It's not any more quiet than the 15 y/o 1 it replaced. The hardwire install was also just as easy.
by
2 found this review helpful
Oct 15, 2021
What model garbage disposal to use?
This garbage disposal was easy to install and works well! I had another brand before, but much prefer this one.
by
Sep 22, 2021
I have to give this a poor for right now...
I have to give this a poor for right now because even though I purchased this months ago I'm still waiting for Home Depot to have it connected. It was finally installed a few weeks ago but it is yet to be connected to power so who knows how good it is or isn't.
by
Response from Moen Plus SupportSep 22, 2021
Hello Rob and thank you for your feedback you posted on the Home Depot website. Thank you for your purchase of the Moen Host Series 3/4 HP Continuous Feed Space Saving Garbage Disposal with Sound Reduction and Universal Mount. If you have any questions or concerns, our product specialists are available for installation, technical and warranty assistance. They can be reached at 1-800-289-6636 and are currently available Monday through Friday from 8:00 am – 7:00 pm Eastern Time.

Customer review from moen.com
Jul 18, 2021
Extremely quiet and very powerful
My old disposal rusted out like all the others I’ve had before. There is a reason that they are cheaper. I upgraded to 3/4 hp because my wife spends a lot of time in the kitchen and the disposal gets used a lot.
by

Customer review from moen.com
Jun 9, 2021
TERRIBLE PRODUCT
FIRST NEW MOEN DISPOSAL WAS MAKING SO MUCH NOISE, IT HAD TO BE REPLACED. REPLACEMENT WAS INSTALLED AND STARTED LEAKING DUE TO FLANGE BEING WARPED.
by
Response from Moen Consumer ServicesJun 10, 2021
Thank you Mark so much for the feedback you posted on the Moen website. Moen takes consumer comments very seriously and we are delighted to have the opportunity to assist you. Our records show we have received your email and your issue is being addressed at this time. If you have any additional questions, please contact us directly.

Customer review from moen.com
Jun 6, 2021
Installation made very easy!
I bought a Moen Disposal (3/4 hp) to replace my 1/2 hp (seized motor). I knew the snap ring was going to be a pain. To my surprise a Snap ring tool was included. That made install much quicker than I expected. The unit is quiter and more powerful than my last and had a better warranty (manufacture's) and much better price, plus my military discount didn't hurt either. I definitely one happy camper!
by

Customer review from moen.com
May 17, 2021
Super quiet
This replaced a developer grade 1/3 HP Insinkerator from 2009, and the difference in decibels is a revelation. Quieter wasn't even my goal, but power was. Followed the video instructions and everything went smoothly. It's working properly and I'm 100% satisfied so far, though it's only been one day. If any leaks occur it's probably because I accidentally rotated the assembly after affixing it to the sink, potentially breaking the putty seal. So far no leaks, though. Even though it's slightly larger than the Insinkerator, it's slightly lighter and therefore easier to install alone, if necessary. The only feature I miss is the hex key, blade access control underneath the Insinkerator. Moen forces you to buy a separate unjamming wrench, which at $11 isn't a lot but still, I already own Allen wrenches.
by
9 found this review helpful
Apr 23, 2021
Easy as pie.
I arrived at my decison to buy a moen because of the excellent installaion video. I read instrucions several times . First unpluged old leaking 13 year old 1/3 hp disposal unit . Then disconected plumbing which i cleaned and replaced nessary parts . And simply with a phllips screwdiver twistrd the old disposal off. I WAS Impressed maybe that took ten minutes. Installation was just as easy
by
4 found this review helpful
Showing 1-10 of 2,149 reviews

Moen created The Prep Series of garbage disposalsMoen created The Prep Series of garbage disposals for homeowners who do basic food preparation and want to keep their kitchen clean and fresh. Built with a streamlined design and a powerful, high-speed motor, The Prep GXP50c cleans up everyday foods like celery, potato peels and seeds. The Prep GXP50c installs easily on most existing 3-bolt assemblies and is backed by a 5-year limited warranty with in-home service.View Full Product Description

Get rid of food waste in a flash with theGet rid of food waste in a flash with the KRAUS WasteGuard Continuous Feed Garbage Disposal for Kitchen Sinks. Featuring a MagnaGrind 3800 RPM 3/4 Horsepower permanent-magnet motor, this premium disposal provides instant power, ensuring faster operation than traditional induction motors for reliable grinding of the toughest food scraps. The continuous-feed garbage disposal can shred large quantities of food scraps, eliminating the need to grind in batches. This eco-friendly kitchen fixture grinds waste into small particles and disposes of it through the sink drain or septic system, helping you to cut down on plastic garbage bag use. Motor-saving shut-off technology instantly cuts power to the disposal in the event of a blockage to help prevent damage to the motor. Built for long-lasting use, the stainless steel grinding components are encased in ABS housing and insulated with QuietStorm soundproofing technology for quieter operation. Mounting is simple with an EZLock assembly that locks into place with a turn of the hand. The universal design fits all standard US plumbing and sinks with round 3-1/2 inch drain openings. An included stopper allows you to fill up the sink bowl for soaking dishes, with an extended tailpiece that doubles as a plunger to safely push stubborn food scraps into the disposal. Comes with a complete garbage disposal install kit, including power cord and flange.View Full Product Description

Moen created The Chef Series of garbage disposalsMoen created The Chef Series of garbage disposals for homeowners who frequently cook from scratch and want quick cleanup of even the toughest food scraps. Built with a streamlined design and our most powerful, high-speed motor, The Chef EXL100c cleans up foods like raw and cooked meat, corncobs, chicken bones and large fruit pits. Featuring integrated, motion-activated lighting, The Chef EXL100c installs easily on most existing 3-bolt assemblies and is backed by a 10-year limited warranty with in-home service.View Full Product Description