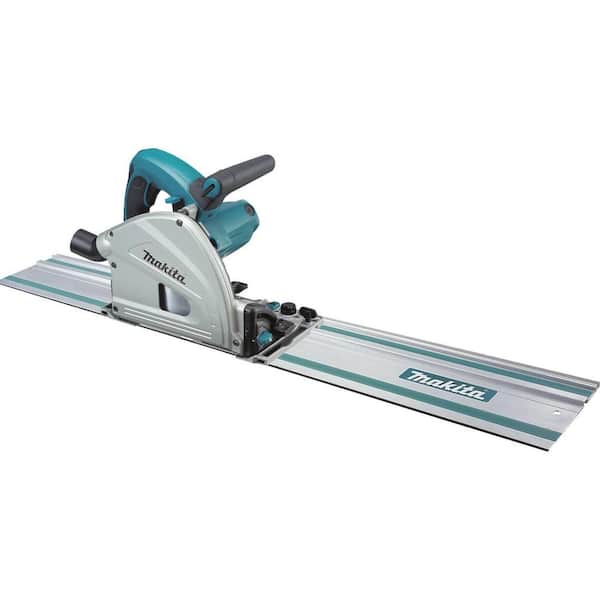 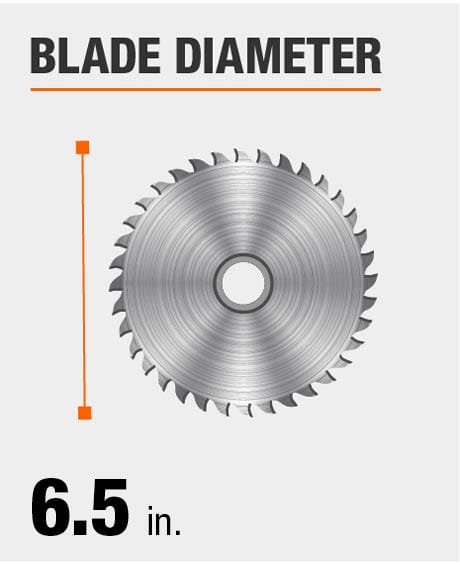 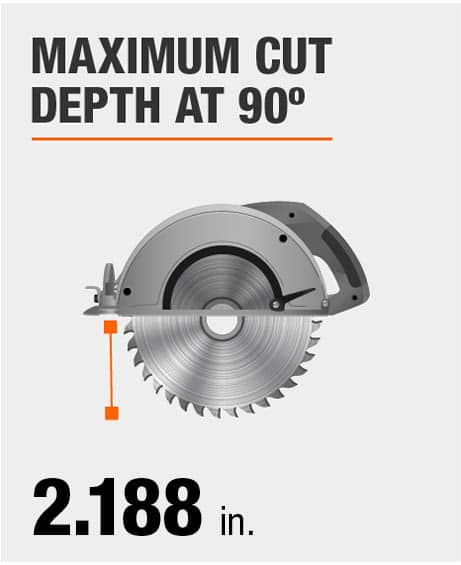 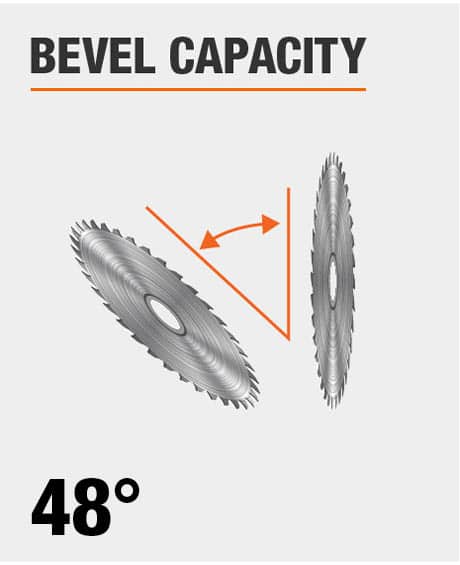 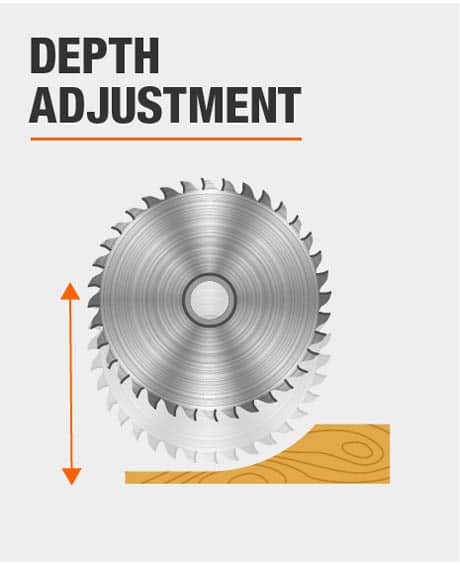 The Makita 6-1/2 in. Plunge Cut Circular Saw and 55 in. Guide Rail work together to produce accurate cuts with minimal tear-out. The saw combines a powerful 12-Amp motor and a large cutting capacity with magnesium components for less weight (only 9.7 lbs.). Electronic speed control maintains constant speed under load for smooth handling and a splinter-free, mirror finish. The saw delivers accurate cutting as the position of the blade enters the material on the same cutting line, whether cutting straight or bevel.

Why do you tout this as a "special price"? It is the same as elsewhere.

36V cordless version or this?

Everyone seems to say it ships without protection and thr guide rail is bent. Has any action been talen to addresa this? Wont purchase until i hear.

i need it to cut aluminum. i need a saw blade to cut it so which saw blade will fit this saw

Blade: Will the Diablo Model #D0641R blade work with this as a replacement blade?

Will any other guide rails work?

Festool if you feel like blowing extra on it

Guide Rail Problems – why is this so. I really want to purchase this item, but everywhere that I ...

Can you please elaborate? I own three guide rails and no issues. I have friends with the Festool and Makita and none of them have issues. I've spent quite some time on various woodworking forums and I haven't read of any problems other than general wear and tear. The closes thing I can think of is connecting two of the 55" inch rails can be a little finicky. I use my level to align both sides straight rather than eyeballing it.

Can you cross cut a 2x4 by just plunging the blade down?

You could but I wouldn't recommend it , since you can't lock the blade in a set position !

I just got this tool and I want to like it. But it seems like there is something not quite right ...

sounds like trouble, suggest you return for an exchange

If I buy the extra rail how do they join? I thought there is a metal connector?

14
Filter by:
Showing 1-10 of 127 reviews
Aug 28, 2018
Wish I would have bought this saw a long time ago!
Wish I would have bought this saw a long time ago!
by MDDesigns
2 people found this helpful
Apr 23, 2015
Fantastic Buy, Home Depot is the only place to get a Makita.
Forget about all those other saws, it's time to get the one and only saw you may ever need. It is light,can sit flat on any surface , has plenty of power. . Most importantly it cuts like butter and leaves the cleanest cuts in those expensive plywood purchases and is accurate to the nth degree. I read all the reviews and watched the videos and until you hold it and use it well.... you will see that it is awesome Other things to note: The case is a large cube like box that has plenty of room for guide rail clamps. Dewalt rail clamps work well with this rail. The rail has blue anti friction like surface strips that let the saw slide smooth and easy. Underneath the rail the rubber strips hold tight to the work surface and prevent the need for clamps but I use the clamps just to be safe. Use a a shop vac with this saw and there is little to no dust. I like this saw so much, I keep inventing ways to use it. Home Depot has the price about what it was selling for almost a year ago. I think that most people are finding that this saw is as good if not better than Fess Tool, and for this reason it is getting harder to find a good price for this saw. So I would not delay and get one ASAP.
by hawkman

8 people found this helpful
Dec 12, 2014
Should have read the bad reviews...
I read about 50 reviews about the saw on different sites. Should have paid attention to the bad ones. The saw came in a big box from Home Depot with no cushioning of any kind. The Makita container had very awkward latches on four sides. You could break a finger trying to open it... But here is the worst news: the saw is loose inside! no straps, no holders, no styrofoam even! Did I buy a precision tool or a big rattle toy??? The saw did not cut square. Took a lot of power to push it on guide rails. Blade was burning the wood on one side. After cutting two sheets of 8x4 melamine boards blade was useless. The angle scale was off by about 3 degrees. The angle of a finished cut was 87degrees on one and 92 on the second one. Release button had to be wiggled to push. Thanks to HD return policy I was able to get my money back. Got the Festool instead and could not be happier! It was worth the extra $200 and some.
by notafan

Makita, a pioneer in brushless motor technologyMakita, a pioneer in brushless motor technology and battery innovation, combines both in the 18-Volt X2 LXT (36-Volt) Lithium-Ion Brushless Rear Handle 7-1/4 in. Circular Saw (XSR01PT). It's powered by two 18-Volt LXT Lithium-Ion batteries for maximum performance and has an electronically controlled BL Brushless motor that matches torque and RPM to the application. Makita 18-Volt X2 means freedom from the cord, even for demanding applications like cutting sheet and dimensional lumber that traditionally called for a corded saw. Best of all, users can remain in one battery platform, using the same fast-charging 18-Volt batteries with the XSR01PT as they use across the expansive Makita 18-Volt LXT cordless tool series. The XSR01PT has a long list of features for efficient cutting without the cord. Users of leading corded saws will appreciate the blade-left rear-handle design. The electronically controlled brushless motor delivers a full 5,100 RPM for efficient cutting. In internal testing, the XSR01PT made up to 558 crosscuts per charge in 2x4 SPF lumber using 2 fully-charged 5.0Ah batteries. Added features include a large 2-9/16 in. cutting capacity at 90° that will cut 3X lumber in a single pass and an electric brake for maximum productivity. The saw has a die-cast magnesium base and blade guard with die-cast aluminum blade cover and motor housing, which combines durability with less weight (only 12.4 lbs. with batteries).See Full Product Description

The Makita Circular Saw with Electric BrakeThe Makita Circular Saw with Electric Brake has a 14 Amp motor and 3800 RPM for enough power to cut beams, timber and 4 times the material in a single pass. Featuring a large cutting and bevel capacity and precision gearing with a ball and needle bearing design, this saw is loaded with a variety of ease-of-use features, including an electric brake, an adjustable top guide to align notches with line-of-cut and the blade wrench attached to the saw for fast blade changing. The large and conveniently-located adjustment knobs and levers are engineered for easier adjustments and the well-balanced design and lightweight 20.3 lb. design allow for easy maneuverability and less user fatigue.See Full Product Description

The Bosch GKT13-225 Track Saw with PlungeThe Bosch GKT13-225 Track Saw with Plunge Action delivers precision and power, ideal for making table-saw quality cuts to wood and wood-based sheet goods such as laminated particle boards and plywood. The track-guidance system provides exact adjustments for precision end-to-end cuts and plunge cuts. The saw includes constant electronics to help maintain speed under load. The saw also features a spindle lock, a swiveling hose port and a lock-off mechanism. It features overload protection. It has a single pivot point for both bevel and non-bevel cuts, from -1° (for slight undercuts) to +47° cuts. It allows for efficient dust extraction when connected to a suitable vacuum cleaner. The GKT13-225L Kit includes a 48-tooth 6-1/2 in. track saw blade, blade-change wrench, and an L-Boxx case. Bosch offers a full range of optional attachments, including 4 different track lengths, connector for connecting multiple tracks, an angle guide and a rip fence. The Bosch FSN1600X2B 63 in. Tracks and Connector Kit is a convenient timesaver. It features 2 FSN1600 tracks, which are 63 in. (1600 mm) long, an FSNVEL connector, and a FSNBAG track bag. The FSN1600 track is precisely straight and manufactured with exacting tolerances. It includes an anti-splinter guard and 2 rubberized traction strips, each custom molded to securely interlock with a slot in the track. The FSNVEL is a sturdy connecting-piece to quickly connect tracks, and it's self-aligning, helping to ensure precise work.See Full Product Description