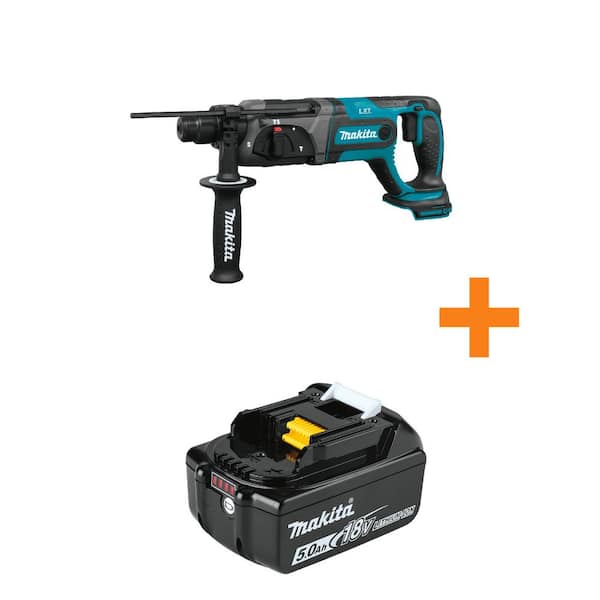 The Makita 18-Volt LXT Lithium-Ion Cordless 7/8 in. SDS-Plus Rotary Hammer (model XRH04Z, tool only) delivers faster, more efficient percussive drilling to the jobsite. The versatile XRH04Z has 3-mode operation and a built-in torque limiter to ensure stable torque control for a range of concrete drilling tasks, with a more compact design and less vibration. It's part of Makita's expanding 18-Volt Lithium-Ion series, the world's largest cordless tool line-up powered by an 18-Volt Lithium-Ion slide-style battery. Makita 18-Volt Lithium-Ion batteries have the fastest charge times in their categories, so they spend more time working and less time sitting on the charger. For improved tool performance and extended battery life, Makita created Star Protection Computer Controls. Star Protection is communication technology that allows the Star Protection-equipped tool and battery to exchange data in real time and monitor conditions during use to protect against overloading, over-discharging and overheating. For increased versatility, the tool can also be powered by Makita 18-Volt LXT and Compact Lithium-Ion batteries with the star symbol on the battery indicating Star Protection inside. This Promotion also comes with a bonus BL1850B 18V LXT Lithium-Ion 5.0Ah Battery.

Thank you for your question. These batteries are interchangeable.

Can this be used for tile scraping?

Thank you for your question. The XRH04Z 18V LXT Lithium‑Ion Cordless 7/8" Rotary Hammer can be used for scrapping, I recommend using Part #( A-30106) SDS Plus bit.

is the biggest battery you have a 6ah?and what are all them rated for when recharging before ther...

Thank you for your question. The BL1860B 18V LXT® Lithium‑Ion 6.0Ah Battery is the highest capacity battery currently offered. Battery lifespan is affected by many variables, such as climate, usage, and storage. Because of this, we do not have a published expected lifespan of batteries.

Ah is a measure of what the battery can store, but Ah are only half the story. When you multiply amp hours times volts you get watt hours... and that's how you know how much actual power is stored in any battery. There's a bit more to it than that... as amp hours change with discharge rate... but that's a good starting point for knowing how much power is in any given battery. So my 5 amp hour 18 volt Makita battery has about 1/3 the stored power of my 5 Ah "56 volt" EGO yard tool battery.

I've had a Makita 18v battery for three years, and it will no longer take a charge. Is this common?

Lithium batteries like to live at half charge. It's hard on them to sit fully charged... and it's REALLY hard on them to sit completely dis-charged. That's typically when they die. There is battery management circuitry built-in to keep you from over-charging and over-discharging. It's possible that you could get 10+ years if you're careful to keep your battery mostly in this range. And yes, of course you can fully charge the battery when you know you're going to use it. Having these new fuel gauges is really helpful... just try and keep them on two or three bars all the time and they should last a 5-7 years easy... Lastly, all batteries like to live at room temp... temp extremes can also kill batteries. Hope that helps!

i bought this rotary hammer a while ago and i lost the depht gauge,can i get it wiht you?

Will tool drill into granite?

Thank you for your question. Yes, the XRH04Z 18V LXT® Lithium-Ion Cordless 7/8" Rotary Hammer, Tool Only should be capable of drilling into granite with a proper bit.

How heavy is this battery in comparison to the 2.0Ah batter?

Honestly i really can't even feel the difference

What is the average amount of holes that can be drilled on 1 2.0ah charge

The amount of holes that can be drilled depends upon the material being worked on. However, for a longer run, you can use batteries that have higher amp capacity.

Compact and powerful, the Milwaukee M12 12-VoltCompact and powerful, the Milwaukee M12 12-Volt Lithium-Ion Cordless 3/8 in. Ratchet (Tool-Only) is only 10-3/4 in. long and weighs only 1.9 lbs, making it an ideal fastening solution for automotive mechanics and maintenance and repair professionals who demand maximum performance and convenient portability. The compact low-profile head and cordless design allow easy accessibility into the tightest of spaces or engine bays, while the powerful 12-Volt motor produces up to 35 ft. lbs. of torque and 250 RPM, giving users the power and speed of a pneumatic ratchet without the hassle of an air hose. Featuring a variable speed metal trigger and reinforced steel housing for ample control and durability, this ratchet can withstand daily jobsite wear and tear for years of reliable use. Includes A Free M12 Compact 2.0Ah Battery Pack (48-11-2420).See Full Product Description

18-Volt ONE+ Lithium-Ion Brushless Cordless 3 in. x 18 in. Belt Sander and Fixed Base Trim Router (Tools Only)

RYOBI introduces the 18-Volt ONE+ Lithium-IonRYOBI introduces the 18-Volt ONE+ Lithium-Ion Brushless Cordless 3 in. x 18 in. Belt Sander and Fixed Base Trim Router (Tools Only). The brushless motor produces speeds of up to 850 FPM, providing the user with true corded performance with cordless convenience. With a low-profile design and a tool-free 5-position pommel handle, this sander is able to get into tight spaces while providing a more comfortable and customizable user experience. Additional features include tool-free belt tracking and a lock-on switch to maximize user control and convenience while you work. The 18-Volt ONE+ Cordless Fixed Base Trim Router allows the user to create the perfect edge with the correct router bit and optional woodworking base. With 29,000 RPM, you can trim quickly and efficiently. The router features a compact design for fine routing. Best of all, it's a part of the RYOBI ONE+ System of over 175 Cordless Tools that all work on the same battery platform. Backed by the RYOBI 3-Year Manufacturer's Warranty, this kit includes an 18-Volt ONE+ Brushless Belt Sander with a dust bag, an 80-grit sanding belt, an 18-Volt ONE+ Cordless Fixed Base Trim Router with a collet wrench, and an operator's manual. Battery and charger sold separately.See Full Product Description