Cabrini Theater 71 in. White Gloss Entertainment Center with 3 Drawer Fits TVs Up to 60 in. with Wall Panel 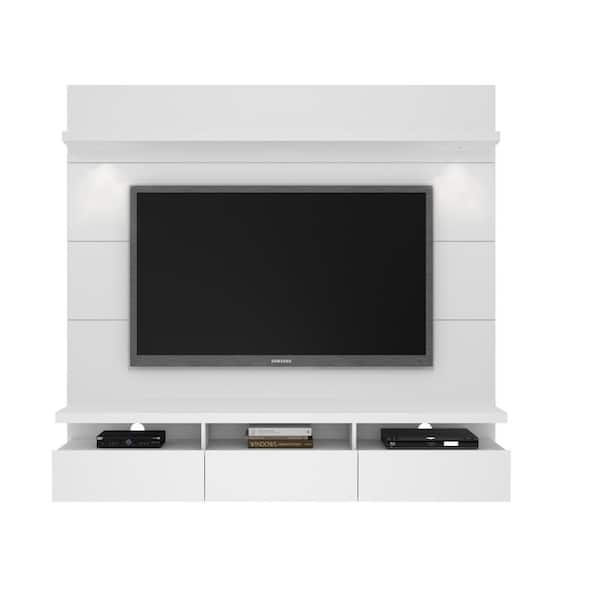 Hosting the Super Bowl, Enjoying a quiet intimate evening at home, Your TV has never looked better mounted on the Cabrini Theater Panel. Simply attach it to the panel using the built-in TV mount, lie back, relax and enjoy the view. The 3-cubbyholes and 3-full extension drawers allows you access to store DVD's, TV remote, magazines, and other objects for easy reach. With built in overhead LED lights that will surely call attention to this sleek and sophisticated home theater, go ahead and have guests over. Your living room is ready. Choose between different modern finishes to compliment your living environment. Our unique finishes allow easy cleaning, so your TV stand always looks shiny and new. Recommended for concrete and brick walls, not dry walls. The unique paint is protected by the Microban Antibacterial Protection.

5
Filter by:
Showing 1-10 of 20 reviews
Apr 12, 2021
Beautiful Unit but challenging to install!
This is a beautiful addition to our living. Modern looking but I must say If you’re not handy or a troubleshooter I don’t recommend you buy. It took 2.5 days to build and install. Instructions were not clear at all. We had several screws missing. Do not use the anchors included, they will never hold the unit to the wall. We used toggle/butterfly anchors. We also used the butterfly anchors to mount the tv to the unit. The ones included would have never held our tv. We had to drill a hole into one of the drawers, to hide all the wires, as the space between the wall and unit is 1” and most plugs were two inches so we could even plug behind the tv.
by

Customer review from homedepot.ca
Feb 27, 2021
Worth the Struggle to Assemble and Install
Before I dive in, it’s worth noting that I’m thrilled with how this product looks in my living room. It’s sleek, modern, and conceals all of our wires and cords. Highly recommend it on aesthetics alone. And now to the not so fun part: the assembly and installation. Based on the reviews I’d read before purchasing this product, I knew this part was going to be difficult. But I have to say, the process was even harder than I anticipated. It took me three nights to get this thing on the wall…probably 9 hours total…and I’m pretty good with this kind of stuff. To start, the instructions that came in the package were only for the top TV panel. The instructions for the bottom drawer unit were nowhere to be found. And when I say “instructions,” I’m not talking about the step by step instructions that you’ve grown accustomed to. They’re laughably vague with very small print, and leave you to figure it out for yourself. After doing some digging on the internet, I found the correct manual here: https://support.manhattancomfort.com/article/28-23700-cabrini-theater-panel-1-8 It’s worth noting that the drawer panel is hung separately from the TV wall panel. Everything is attached to the wall with rectangular, interlocking hook-shaped brackets. There are 2 two brackets on the back of the drawer panel, 4 brackets on the back of the TV panel, and 6 corresponding wall brackets. The wall brackets are twice as wide as the panel and drawer brackets, meaning you’ve got a little bit of wiggle room to slide everything left or right once it’s up on the wall. Of course, the hardware that’s included for mounting the wall brackets is for “brick/concrete only.” If you’re looking to hang the panel on drywall/studs, then you’re going to have to do some measuring, math, and translating. Each wall bracket is about 7” long, and has two holes in it that are 5” apart. Since most walls are built with studs that are spaced 16” apart on center, you’re only going to be able to attach each wall bracket to a stud in one of the two holes. I had to run to Home Depot (see what I did there?) to get some heavy duty toggle bolts to use on the non-stud holes. The manual gives you specific measurements on where the wall brackets should go, but none of these measurements are valid because the location of your studs will be different from what the template suggests. Once I figured out where the wall brackets needed to go, I translated those points to the back of both the drawer panel and TV panel, ignoring the pre-drilled holes on both panels. As for the assembly itself, I ran into several instances where the item number called for in the manual was completely wrong, or swapped with another item number. If you take your time, you’ll be able to figure it out. But if it seems wrong in the instructions, then it probably is. One of the most difficult steps was attaching the top shelf to the TV panel. I recruited my wife to help me at this point, as the pre-drilled holes didn’t really line up, or were non-existent. There was a bit of swearing involved as we tried to hold up the heavy, giant TV panel while also screwing in the shelf and making sure it was level. Before you hang the panels, you need to have a clear idea of what electronics are going where and string all of the power cords/HDMI cords, etc. to the right locations. We wanted to hide our power strip and all power cords in the middle drawer, and achieved this by drilling an additional hole through the back of the drawer panel, just behind the drawer itself. Even though we had a clear vision of what we wanted to do, I’m pretty sure we mounted/unmounted both panels about 5x before getting all of the wiring properly pulled through. An added layer of complexity was that our TV does not have a removable power cord, so pulling that through the panel required extension cords that we eventually removed. Was this fun? No. Not even a little bit. But like I said, this thing looks awesome in our living room. We couldn’t be happier with the result.
by
1 person found this helpful
Dec 13, 2020
Just awesome!...
Just awesome!
by
Jan 14, 2020
Cantina 1.8 Floating Wall Theatre.
Not easily assembled, but a beautiful piece of furniture when completed and on the wall.
by

City 72 in. White Gloss Composite Floating Entertainment Center Fits TVs Up to 70 in. with Wall Panel

The City Theater Panel 1.8 designed by ManhattanThe City Theater Panel 1.8 designed by Manhattan Comfort creates a sophisticated theatrical vibe for your living room. Simply attach it to the panel using the built-in TV mount, lie back, relax and enjoy the view. The City 1.8 TV stand offers an organized space for your TV and accessories. The City 1.8 comes with built-in brackets to conveniently hang your TV and save floor space. Features 3 media shelves and 2 spacious cubbies with flip down doors. Features an overhead shelf to display photos, Collectible and trophies. Choose between different modern finishes to compliment your living environment. Our unique finishes allow easy cleaning, so your TV stand always looks shiny and new. Recommended for concrete and brick walls, not dry walls. The unique paint is protected by the Microban Antibacterial Protection.See Full Product Description

Cabrini 86 in. Black Engineered Wood Entertainment Center with 2 Drawer Fits TVs Up to 70 in. with Wall Panel

Cabrini 71 in. Black Engineered Wood Entertainment Center with 2 Drawer Fits TVs Up to 60 in. with Wall Panel

Cabrini 71 in. Off-White Engineered Wood Entertainment Center with 2 Drawer Fits TVs Up to 60 in. with Wall Panel