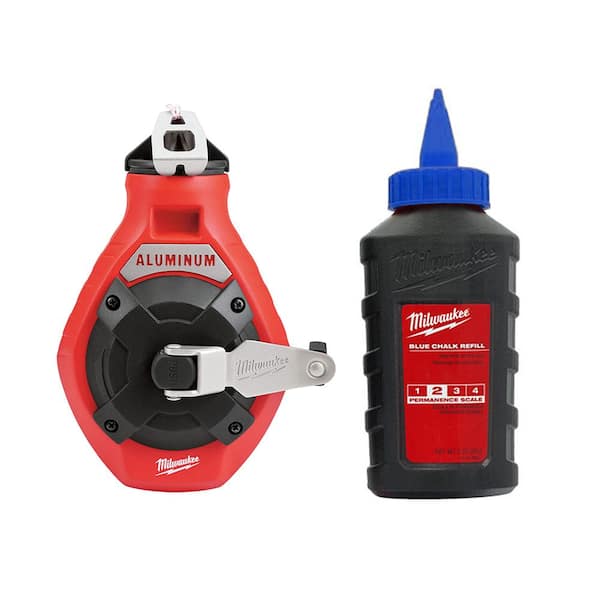 2
Filter by:
Showing 1-10 of 28 reviews
Sep 12, 2016
Fast Real, Bold Line, Solid Handle
You don't realize how nice a chalk line can be until you buy one that isn't nice at all. I recently purchased another brand in a pinch and while in the middle of the job the handle knob just disappeared. I found myself having to snap the line two to three times to get a good solid line. I am very pleased with this line. This has snapped 40-50 lines and the handle and knob are still in tact. The blue chalk and line snap very bold and defining lines. This has a 6:1 gear ratio inside and it pulls the line in fast with little effort. The handle is adjustable by pushing in the handle assembly . This allows you to put the handle where you like and makes it easy to put the handle back in its storage position as the string stretches over time. The filler hole is probably and inch and a half, this minimizes the mess all over the floor while trying to fill with chalk. There is even a hook to hold the hook in place while storing. This is a good size chalk line, easy to hold, and holds a bit of chalk. My only real complaint, this is the first chalk line I have ever seen that does not have a belt clip. I find myself irritated from time to time that I have to carry it everywhere, set it down, pick it up. A belt clip would have made this even better.
by
1 person found this helpful
Aug 2, 2016
Decent chalk line
Overall, its a decent chalk line. It functions as expected, and holds a large load of chalk minimizing refills while working. The construction itself is fantastic. It feels as sturdy as a brick, and could withstand some serious beatings and drops. It is aluminum construction, and you can feel it. No plastic casings that feel weak or flimsy. It adds a little bit of weight, but I think this is a good sacrifice. If your line breaks mid-job, (depending on the job) it can be impossible to continue, so the rigidity of the aluminum body and security it provides is well worth it. The gear reduction in the crank is a nice feature. It takes a little more force / torque to get it to start winding back up again, but it travels so much faster it is unreal. It is great when doing long lines, like when roofing. It almost feels like a tape measure whipping back at you. There is one major issue with this chalk line though, and it is a big deal to me. On the metal hook at the end of the line, the opening for hooking the line onto a nail for one person operation is flat. This can be seen in one of my photos. It is ~ 3/8" wide and flat, so there is potential for major mis-alignment. Most lines are V-shaped, so that the hook self-centers on the nail when pulled tight, but this line tends to slip one way or the other. May not be a big issue for you, but when precision is needed, like tile floor layouts, this makes for a major issue. Such a simple issue could be fixed by changes the stamping dyes used to make the hook, and was probably an oversight when designing and engineering this tool, but it is a major usability issue.
by
1 person found this helpful
Jul 12, 2016
Great Chalk Reel
This is a really well-made chalk reel. It's a little larger than my old chalk reel, but it's not so big that it's not comfortable to hold in one hand. The reel is easy to turn and pulls the line back in quickly and smoothly. The hook is sturdy and stays in place, and adding chalk was very easy and mess free. Great chalk reel that should hold up for a long time!
by
1 person found this helpful
Jun 22, 2016
Well constructed
Wow!What a great design and well constructed. This is a sturdy, solidly constructed tool. The ergo design allows the reel to move freely without getting caught on my hand or the box itself. 100 feet of string, and blue chalk complete this combo. I pulled all the string out in order to chalk my box. The string came out easy and went in as well. What a great chalk box.
by
1 person found this helpful
Mar 2, 2021
Wish I would have read reviews.
This on one that Milwaukee missed the target on. They make great power tools. I own many 12 and 18 cordless tools. I have always been a Milwaukee guy and always will be. But this I am going to be returning. First how do you sell a chalk box with a bottle that does not have a cap? You have to cut the tip off like a tube of caulk, but has nothing to put on top to stop from spilling or having moisture get in. BIG FAIL! Next go to pull the string out and the line kept binding. Maybe if you fully pull it out before you chalk it up and re-roll it in it might help, but I wasn't going to make that mess. Keep up with your power tools and send this one back to R&D dept. A chalk box is a simple tool and does not need to be over complicated.
by
Response from Digital CareMar 2, 2021
Hello, NOLA_Dave! We appreciate you taking the time to review our 100' Bold Line Kit w/ Blue Chalk. We apologize for your frustrations, we'll be in contact shortly via email to help provide support. Thanks- Hannah from Milwaukee Tool

Customer review from milwaukeetool.com
Nov 14, 2020
Need to stick to making power tools
Just to start, I have used Milwaukee power tools as a professional tradesmen for going on 20 years. If you need a corded drill, porta-band, sawsall, etc there is no better choice. But I think they are trying to reach out of their field and reaching too far. The good: It does make bold lines and appears to hold chalk pretty good The bad: Just about everything else. The handle is plastic and flexes. You can’t pull out more than a couple feet without it binding up. After striking your line, good luck getting it to roll back up. I have to pull out a couple more feet just to get the handle to free up and to get it to retract.
by
Response from Customer CareDec 1, 2020
Hello, We are sorry to hear about your experience with our 100' Bold Line Kit. Thank you for bringing this to our attention, we will be reaching out via email to provide additional support.

Customer review from milwaukeetool.com
Jul 1, 2020
not fof a 100' Bold line kit w/Blue Chalk
use for chalk line on small thing works fine, but when i use for 6' ft.sheetrock chulk line, line got stuck does not want to pull out, how do i get replacement
by