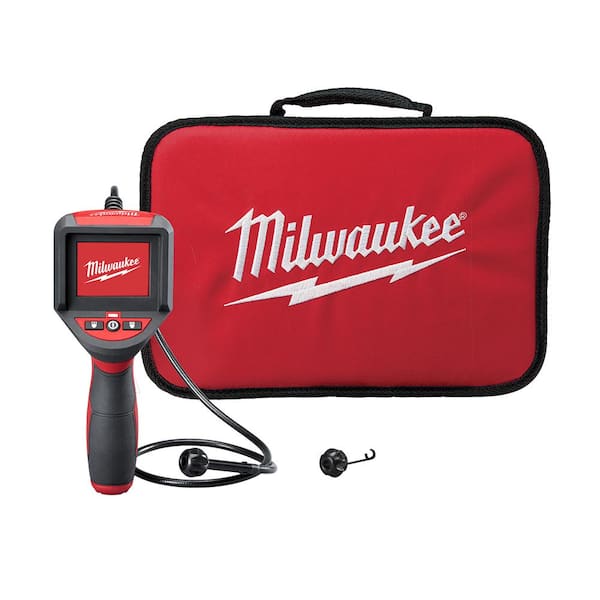 The Milwaukee M-Spector Inspection Scope Kit delivers professional diagnostics in hard-to-reach places. With the smallest camera head in its class (9 mm Dia), the M-Spector allows you to quickly inspect behind walls, in vents, pipes and other tight spots. The 320 x 240 digital inspection scope provides superb image quality -- crisp, clear images jump off the large 2.7 in. LCD displayand four LED lights surrounding the inspection scope provide ample illumination without shadow or glare. The 3 ft. cable is rigid yet flexible and slides into narrow channels to let you see spaces that are otherwise not visible. This kit includes a pipe guide attachment for improved maneuverability in pipes and is also compatible with Milwaukee hook, magnet and mirror attachments (sold separately) for greater versatility.

25
Filter by:
Showing 1-10 of 151 reviews
Apr 30, 2021
Useless tool due to limited run time @ 9 volts.
Even with brand new 9 V heavy duty batteries this unit will barely run for one or two minutes total waste of my money I’m a lifelong Milwaukee user this tool is a joke. Have to attach a separate 9 volt supply to finish one 15 min job. I still use my SawzAll purchased in 1968 doubt this tool will last 6 minutes. Wasted my money on a good tool with poor performance. First disappointment with Milwaukee tools and I owned their battery tools back to my first hole shooter w 12 volt NiCad in a steel case.
by
Response from Social MediaMay 3, 2021
Hello, thank you for taking the time to write a review on the M-Spector™ Inspection Scope Kit (9mm). We will send you an email in order to gain some more information! Thank you – Will with Milwaukee Tool

The Milwaukee tablet mount is compatibleThe Milwaukee tablet mount is compatible with the Milwaukee modular pipeline inspection system for hands-free viewing of the sewer camera video on any tablet or mobile device. The included metal mounting plate adheres easily to any mobile device with an integrated high strength magnet that stabilizes the device for secure viewing in any orientation. The tablet mount can be attached directly onto the pipeline inspection reels via the 360 degree adjustable monitor mount or stand-alone on a flat surface. The tablet mount features a tilted base that sits flat on the ground while angling the device for easy viewing on flat surfaces and elevates the device from water, dirt and debris.View Full Product Description