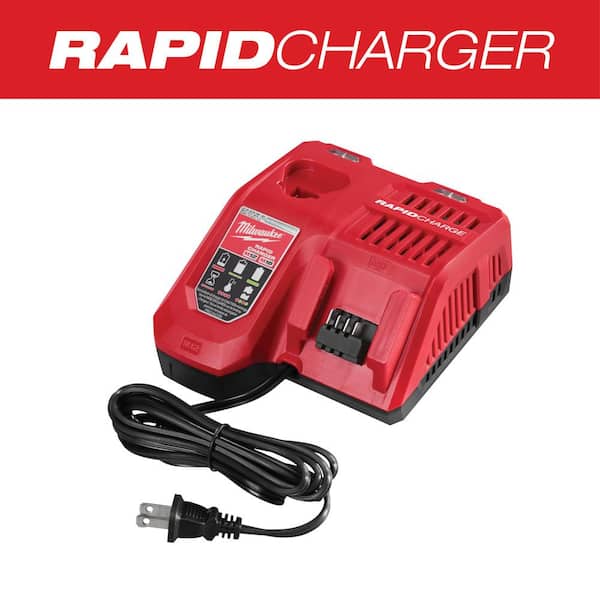 The MILWAUKEE M18 & M12 Rapid Charger charges battery packs up to 40% faster, reducing user downtime and maximizing user productivity. The battery charger accepts all Milwaukee M18 and M12 batteries, providing a charging upgrade for both systems. The charger features REDLINK Intelligence and communicates directly with batteries to monitor cell voltage, temperature, and charge status to optimize the performance and extend the life of the pack. As an added level of communication, the charger indicates when the battery reaches an 80% charge, providing users with the confidence that a substantial amount of work can be completed without having to wait for a full charge.

19
Filter by:
Showing 1-10 of 384 reviews
May 1, 2022
Not sure what’s the problem charger or battery.
I brought weed eater that came with high output XC 8.0 battery and M 12 and M18 charger. I don’t know if it’s battery messing up or charger. Battery dies quicker than when I got it. It also charges way to fast.
by

Customer review from milwaukeetool.com
Mar 7, 2022
Rapid Charger
This charger came with a blower and weed eater combo. I have two other Milwaukee chargers and it charges the same speed as this one.
by

Customer review from milwaukeetool.com
Jan 26, 2022
failed after 4 days
I bought another after my old on failed. and after 4 days of using the new one. The charger died?!?! what gives, this give me a very different impression of "heavy duty"
by
Response from Customer ServiceJan 27, 2022
Hi! We are sorry to hear that you are not having the best experience with the M18™ & M12™ Rapid Charger. We will email you so we can address your concerns. -Cayla with Milwaukee Tool