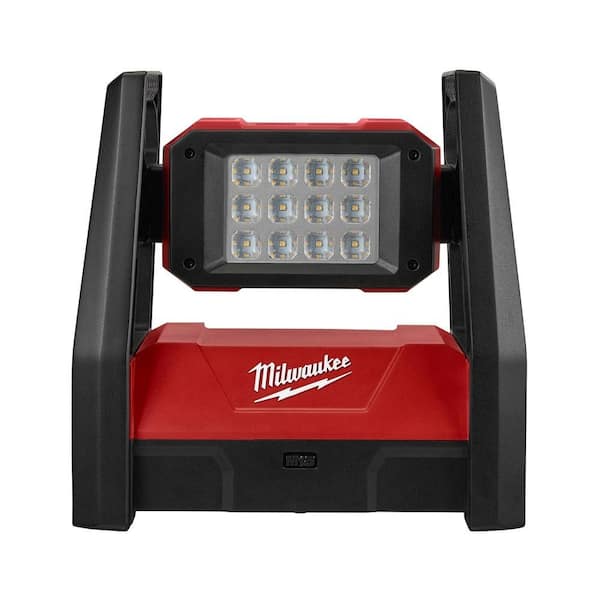 MILWAUKEE designed the M18 ROVER Dual Power Flood Light to be portable flood lighting solution that is 2X brighter and delivers maximum versatility. The M18 ROVER Dual Power Flood Light provides users with 3,000 lumens of TRUEVIEW High Definition Output to fill large areas with light. The ROVER flood light features three modes and up to 9 hours of light when paired with an M18 REDLITHIUM XC 5.0 Battery Pack. It includes an AC port, giving users the option to plug it in with an extension cord for extended power. The light head rotates 240° to direct light in many orientations. Its compact size and integrated carry handles allow users to easily transport or store it in bags, carts or job boxes. The durable roll cage design and impact-resistant lens and bezel make it tough enough for every jobsite. The light is backed by a limited lifetime LED warranty, the LEDs never need to be replaced. ROVER Flood Lights are built to go anywhere and withstand anything.

How long the sale price will go on for

It is great light. Really enjoy it.

what is the biggest battery size it accommodate s

Will the light charge a battery when plugged into 110

Is the base magnetic to mount on the deck of a commercial lawnmower?

Will it charge the battery through the AC connection when a cord is plugged into it ?

Does the light and unit get hot or throw off heat when in use?

Can it be used with a tripod?

Any M18 battery will work with this light, the bigger the battery the longer the run time...

can the bulb be replaced

I see the height listed for the tool, but what is the width of the tool?

4 people found this helpful
Jan 16, 2016
crazy bright!
If you need a work light get it! Came with a free high capacity battery! I like the battery or extension cord power options.
by bluegrassjunction
4 people found this helpful
Dec 20, 2015
Blindingly Bright!
This M18 floodlight is an awesome option for lighting work sites without power, or even for just adding a lot more illumination where you need it. I love that it has a dual power option, so it can run off of M18 batteries or a 120V power cord. The light has a sturdy roll cage, with 17 positive stops across 240° of rotation. There are also 3 keyhole slots on the back for hanging it on a screw or nail on a vertical surface. I used one of the keyholes to mount it sideways to the fence I was working on in my backyard, and it worked perfectly. Using a 5Ah battery, the floodlight outputs 3000 lumens for 2 hours, 1500 lumens for 4 hours, or 650 lumens for 9 hours. The specs line up with a current draw of 2.5A on high. I ran an endurance test using a 2Ah battery, and it lasted 48 minutes on high, which corresponds exactly to Milwaukee's stated run times. The light also starts flashing about a minute before it runs out of battery, which keeps you from having to fumble around in the dark trying to replace it. It's a bit heavy, weighing in at 6.5 lbs without a battery. Carrying it by the side handle is a bit awkward, since it hangs at a 45° angle with the corner digging into your leg. A top carry handle may have been a nice inclusion, but then again it would get in the way of the light when it's aimed vertically. The light head has a massive heatsink behind the LED array which keeps it really cool. After an hour on high, it only reached a maximum of 120°F. The LEDs have a lifetime guarantee, so you'll save money in the long run on the cost of replacement bulbs. Overall, this is an awesome versatile lighting solution. I'm already getting a ton of use out of mine - highly recommended!
by Doresoom

18 people found this helpful
Dec 7, 2015
Good light but has hidden secret
First off I got this light from homdepot website came shortly after When examing the light I found it is a modest 4000-5000k value or between. But when I noticed the screen on my iPad camera was picking up the 60hrz Flickr Which Promoted a mild head ache. About an hour into using this light to give more light on my work area where I was mounting my photos for art from the streets art show. Lights that flicker at 40-80hrz cause head aches in some people because the light is not smooth in its throw output on m18 battery or plugged in it flickers At 60 hrz the build of it was solid and good and heavy duty role cage is a plus I do not recommend this light to anyone who reacts to ultra high flicker rates of light
by Sam

13 people found this helpful
Dec 1, 2015
Incredible, versatile lighting
Would I recommend this product? I would be lost without it. It is sensational! I even dropped it by accident from 4 feet onto concrete and I couldn't even find a scuff on it. It is very comfortable to handle, and much thought was put into the design. You can tilt the light downward and up, and even behind. The weight is excellent. It is very stable, and won't wobble in a stiff wind. I tested the light at close range and to a distance of just under 300 feet. I was simply blown away as I lit up a farm house at a distance of 288 feet. You could make out every last detail and have plenty more light beyond the house itself. I used strictly an M18 lithium ion battery pack on my tests. I do like the option of being able to plug it into a standard household outlet as well. I noticed no difference in the ac or battery pack for lighting intensity. I have used this light time and time again and it has never let me down. I am very pleased with Milwaukee for doing such a wonderful job of engineering and thought process. It also has 3 light levels starting out on high and you can step it down to medium and low beam by simply pressing the power button for each light level desired. I would say this tool would be a must have especially for emergency lighting during power failures; working outside; working under the hood of the car; lighting up the yard; and the list is limitless. I had a different LED light which I really liked, and now I'm not sure I'll ever need it again. Ideally, I'd like 4 of these. One in each car, and two in the house for power failures. With charged batteries on the ready, I can turn nighttime into daytime. A note of caution: If using this light for a road side emergency - Do not ever point it in the sight of traffic! As with any tool, you need to respect the tool and others and yourself.
by deide

25% More Light, All Day Operation. The M1825% More Light, All Day Operation. The M18 ROCKET DUAL POWER TOWER LIGHT is providing more light on the job with 2500 Lumens of True view Light Definition Output. All while having the capability being Dual Power, powered by M18 or extension cord. The light head can be extended from 4-7 to light overhead work or minimize shadows when casting light downward. Capable of filling large areas with light, it provides 2,500 Lumens in its high mode, 1,100 Lumens in medium and 700 Lumens in low and it can run for up to 4-hours, 8-hours or 12-hours with an M18 REDLITHIUM XC 5.0 Battery Pack. It uses True view High Definition Output providing neutral white color and a high color rendering index paired with a Milwaukee designed reflector to produce an even beam pattern. Its reinforced legs are impact resistant and its low center of gravity provides a stable base. The light head is protected by an impact-resistant lens and bezel and it nests into a protective shroud for secure transport and storage. Its LEDs never need to be replaced and are backed by a limited lifetime warranty. The combination of these technologies offers professionals the highest quality LED lighting solution, on or off the jobsite.See Full Product Description

The Milwaukee M12 Underhood Light ShinesThe Milwaukee M12 Underhood Light Shines Brighter, Grips Stronger, and Protects Longer. The LED underhood work light delivers 1350 Lumens of TRUEVIEW High Definition Output for full engine coverage and clarity. FINISHGUARD hooks resist wear, providing long-lasting protection against scratches to a vehicle's finish. The LED light bar features 2x more gripping surface to help users get more contact for better positioning when mounting under hood, undercarriage or elsewhere. The under hood light bar can rotate, slide, remove and hang for added flexibility and versatility, perfect for mechanics working in automotive shops or fleet maintenance. The carrier extends 47 in.-78 in. to fit wide cars and trucks. The LED underhood light delivers up to 8 hours of runtime when powered by an M12 REDLITHIUM XC4.0 Battery Pack. This light is impact and chemical resistant, built to withstand the toughest environments. The high-quality LEDs never need to be replaced and are backed by a limited lifetime warranty.See Full Product Description

The Milwaukee M12 ROCKET Dual Power TowerThe Milwaukee M12 ROCKET Dual Power Tower Light is More Portable and offers All-Day Operation. The compact tower light has the lightest weight in its class and a 45% smaller footprint than M18 ROCKET Tower Lights. This allows users to easily carry it and set up in even the most confined spaces. When not in use, the light collapses down to 31 in. with 3-side handles allowing for easy transportation and storage. The LED tower light extends 5 ft. 8 in. to provide 1,400 Lumens of TRUEVIEW High Definition Output on high mode and 700 Lumens on low mode. The LED light head rotates 210° and pivots 270° allowing users to cast light in any direction needed. The dual-powered light can also be plugged into an extension cord for all-day operation. A built-in low battery indicator flashes, alerting users when the battery charge is running low. After deployment, the portable tower light is supported by impact-resistant, reinforced legs that form a compact base with a low center of gravity to help survive any job site. A protective guard secures the head during transport and storage ensuring the tower light is always ready to use. The M12 REDLITHIUM XC extended-capacity battery delivers 4 Ah (48-Watt-hour) of run time-even in sub-zero temperatures. Each 12-Volt lithium-ion battery is laden with new-age REDLINK circuitry engineered to prevent overloads and protect against cell-damaging discharge.See Full Product Description