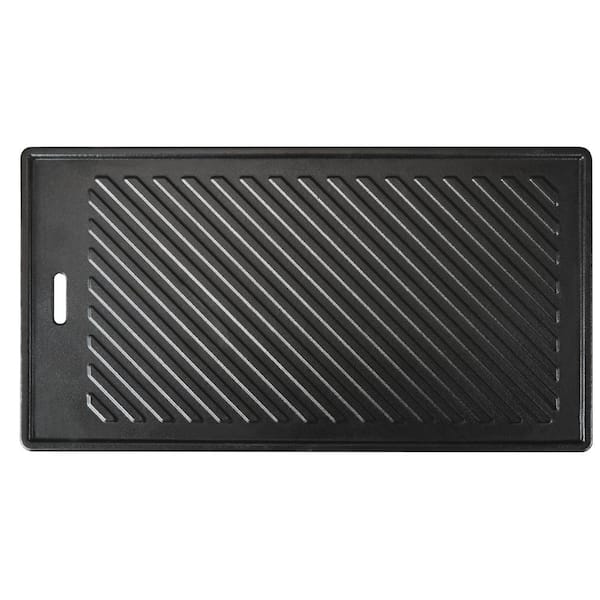 The reversible cast iron cooking plate allows you to add a different kind of cooking surface to your Monument Grill. Perfect for searing meats, cooking fish or vegetables for family or friends. The 9.45 in. wide x 17.7 in. cast iron construction provides great heat retention. Reversible as 1-side is smooth and the reversed side is ribbed. Works on all gas or charcoal grills with cooking surface larger than 10 in. x 18 in.

0
Filter by:
Showing 1-10 of 15 reviews
Nov 11, 2017
I'd been looking for a new solution to grilling veggies and fish, which tend to fall apart easily...
I'd been looking for a new solution to grilling veggies and fish, which tend to fall apart easily when cooked directly on the grill. Sure, you can use a basket, but that's a bit inconvenient, and often doesn't fit well inside a grill. This cast iron cooking plate turns out to be a very good solution. It's essentially a skillet for your grill, and it makes cooking more delicate items a breeze. Here are the pros and cons I discovered after using it: Pros: (1) no more losing food to the fire! (2) very easy to clean (3) has both a textured side and a smooth side. The textured side lets air get underneath to give it more of the grill texture and feel, the other side if more like a frying pan. (4) seems extremely durable (5) holds a lot of heat Cons: (1) Because a typical grill has three grates and four burners, replacing a single grate throws off the balance of the cooking area. With just one cooking plate installed, none of the burners were centered directly underneath it, so food has to be pushed to one side to be evenly cooked. I really don't think there's a solution to this, other than replacing all the grates with plates and just letting food sit across the margins of the plates. (2) making matters slightly worse is that since so much heat is trapped by the plate, the grill doesn't heat up like it does with grates, and the hood-mounted thermometer doesn't gauge the cooking temp very well. I found that with one burner going, I couldn't get the grill above 150 degrees, but I know it was actually far hotter than that at the plate, because my food was at 200 degrees according to my temperature probe. (3) you really do have to clean these after every use, and likely will need to remove them from the grill entirely rather than just brush them off. Food doesn't fall through, it just sits on top, so it gets covered in bits and juices from the food. (4) Replacing all three grates with cooking plates is a very expensive proposition - these are probably made in limited quantities, so the price can't be driven down that low, but it's basically just an expensive piece of cast iron, and you could consider using a cast iron skillet in your grill as an alternative. Ultimately, you might ask why bother with what amounts to a frying pan if you're going to use a grill - couldn't you just fry something in your kitchen? In response, I'd say that the end result really is different. You don't get that smokey flavor quite as much, since there's nothing dripping down and creating smoke, but you do get really high temps at the cooking surface, plus the texture of the simulated grate lines. Additionally, you might be using existing grates in your grill for other food and this allows you to cook everything at once.
by
Response from MONUMENT GRILLSDec 19, 2017
Thank You for your review of the Monument Grill Reversible Cast Iron Cooking Plate!