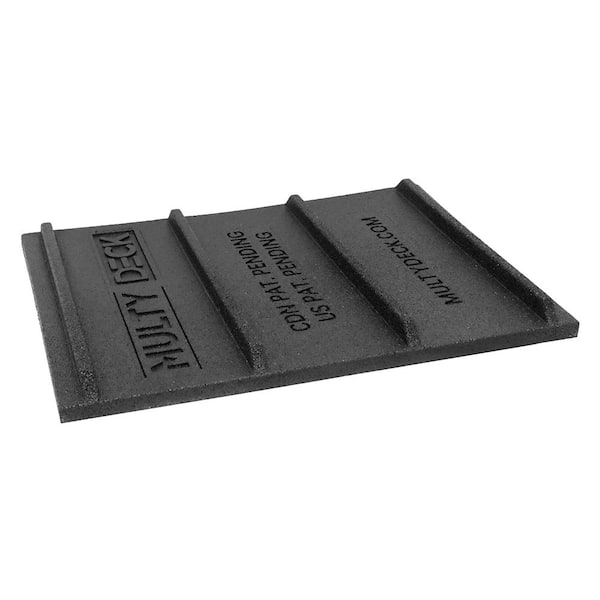 MultyDeck is an economical and eco-friendly deck building material that allows easy and quick installation of floating wooden decks. The rubber base has 3 channels that hold 6 in. lumber or composite to create beautiful decking solutions for a variety of different spaces and surfaces. The versatility and simplicity is truly what sets this system apart. Build your deck on soil, sod, gravel, crushed rock, sand or even concrete in a plethora of different shapes and sizes. You don't have to be a journeyman carpenter to enjoy the many benefits of the MultyDeck. Simply use screws to secure the wood to the rubber base and create amazing decks in your living spaces. The decks can be portable and disassemble just as fast so if your renting or camping this is a deck that has the ability to move as you do. MultyDeck is making everyone a Pro.

What is the total height of the deck after using 5/4” deck boards?

can these bases be used on an existing deck that is structurally sound, but the deck boards are p...

They would work great on any solid base, including a structurally sound deck. Depending on lighting, you may see some of the old deck between the new boards.

Can this be used year round directly on soil? Even if using pressure treated decking, won't it be...

The pads are designed to sit directly on the ground. They're made of recycled rubber, so moisture won't degrade them. If the area is consistently damp, you may end up with mold or moss issues, but that would be with any material you use. I would recommend placing the pads on a gravel bed to improve drainage.

1
Filter by:
Showing 1-6 of 6 reviews
Aug 26, 2020
We have a raised deck on the back of our house, but wanted a ground-level sitting area to be able to watch the kids play in the yard. I had no clue where to start but had already leveled the space where we wanted the sitting area to be, and started looking at surface options like paving stones. When we came across these MultyDeck bases, this was an even better option to make this sitting area a wood deck that can be stained to match our raised deck, creating a warm and uniform look in our back yard. I wouldn’t have a clue how to build a traditional deck without hiring a contractor to help with design and permitting, so a deck never would have been an option without this MultyDeck system! The process is exactly as straightforward as the instructions, and the plans in the product description and on the website for a 12x7.5 deck were the perfect dimensions for the space we had created! We deliberated about whether to use 5/4 nominal or 2” nominal lumber, but realized either would work well with the bases and opted for the thicker surface to make the deck heavier, give it a more solid feel, and elevate it above the height of the grass. To prep the ground we dug down and removed about an inch of soil to take out the grass and remove rocks and clay that would have made leveling the bases difficult. We used half an inch of sand as the bottom layer to give the ground a smooth, flat, and dense base. Then we added a water-permeable fabric weed barrier to allow drainage and prevent runoff from carrying away the sand. On top of the weed barrier we put half an inch of river rock to make the bases easier to level and giving a natural look under the deck. Once the ground was prepped the rest of the deck construction only took a couple of hours. The 12’ deck boards require 5 bases across the length to properly support them, for the 7.5’ size deck we wanted it took four panels of five bases across three 2x6 boards. There were three joining boards needed to connect the three spaces between the four panels. Since the bases screw to the boards from the bottom, only the joining panels have screws visible from the deck surface, which gives the finished deck a very clean and smooth look. We opted to use 2x2 as a trim around the outer edge, and because we used the thicker deck boards did not have to remove the lip from the outer edges as the instructions say. If using thinner deck boards you would need to remove the outer lip to trim with 2x2 and level the surface. This took a single day to complete after the ground prep, and I was able to do nearly all of the work myself without assistance. If you can get someone to help flip the assembled panels, that is probably the hardest thing to do if you work solo, but it can be done! The bases each weigh 10.4 lbs. so a panel with five bases and three 2x6 pine boards weighs close to 200 lbs. and is difficult to flip and slide into position on top of loose rock. The finished deck is rock solid, has no bounce walking across the surface, and has stood up to a week of strong storms with high wind and heavy rain, plus two dogs and several kids running all over and around it, and I have seen absolutely no shifting or movement of the deck at all. Don’t mistake “floating” deck for something that can move easily, as this weighs close to half a ton and feels just as solid as the raised deck attached to our house!
by dcline

9 people found this helpful
Aug 26, 2020
The MultyDeck 1.5 in. x 15 in. x 20.5 in Rubber Deck Base for 6 in. Deck Boards (4-Pack) is a fast way to have a great looking deck without the time-investment in labor. One of the main concerns with building a deck is rot. When the wood rots then safety becomes an issue. It doesn't matter the quality of the treated lumber or how well you maintain it, eventually nature will take its course. The rubber deck base allows for a great barrier between the wood and the ground extending the life of your materials. The rubber deck base is made from recycled tires (I recognized that smell as soon as I opened the package) and will probably last through many replacements of the boards. My biggest problem when doing projects such as this is my back can't handle a bunch of stooping. Assembly went by so quick and easily I didn't have the days of debilitating pain I would have experienced with a traditional deck. You build the deck in sections of 3 boards before flipping face up and tying the sections together with a connecting board. I assembled each section up on saw horses and they were light enough I didn't have to swallow my pride and enlist any lift help. The only problem I encountered was deciding which thickness of 6" board to use. The instructions with the deck base did not specify and neither did the MultyDeck videos. Since the deck is suspended less than an inch above the ground I probably could have saved some money and went with 1 x 6 x 8 boards but I didn't want to take a chance on bowing. I am so pleased with the appearance and simplicity of this project I am going to expand and will splurge for composite boards.
by Tex75

2 people found this helpful
Aug 19, 2020
The multydeck system is a deck base system completely made out of rubber brackets & is portable a...
The multydeck system is a deck base system completely made out of rubber brackets & is portable and easier to work with especially if your a beginner. Each packet comes with (4) 20.5 inch square pieces that`s recessed so it houses (3) 6 inch deck boards either made of wood or composite material, just so long as its 2 inches thick so it sits higher than the rubber base. You can lay down 4 base pieces in a single or double row or go longer/wider if your wanting a larger deck. There is no preparation needed in this deck system other than laying it down on a flat surface which can be dirt, grass, concrete wood chips etc. Besides the wood and the 3 inch screws that goes through the underside of the rubber bases and the underside of your deck planks you can be finished very quickly with this. There`s an option for adding 2 inch wood trim around the perimeter with slightly shorter screws for a nicer look. I think the Multy deck is a great option for someone who wants an outdoor recreation or seating area but cant afford to have someone build it for them or its only 1 person available for building this. It says its Eco-friendly which it is because you only need wood for the deck boards and the rubber base im assuming is probably recycled from tires. Its thick and heavy so i dont see the rubber base wearing out. I do hope that the price range goes lower than $79.98 so more people use this product and help keep more tires out of the landfills. Its a great idea for a DIY deck!
by Mexico

2 people found this helpful
Mar 9, 2021
great way to trap moisture next to a board and create rot
Might be easy, albeit very expesive, option for short term use or for very dry climates, but only safe with composite boards in other areas.
by kevin
Showing 1-6 of 6 reviews

plastic deck board base