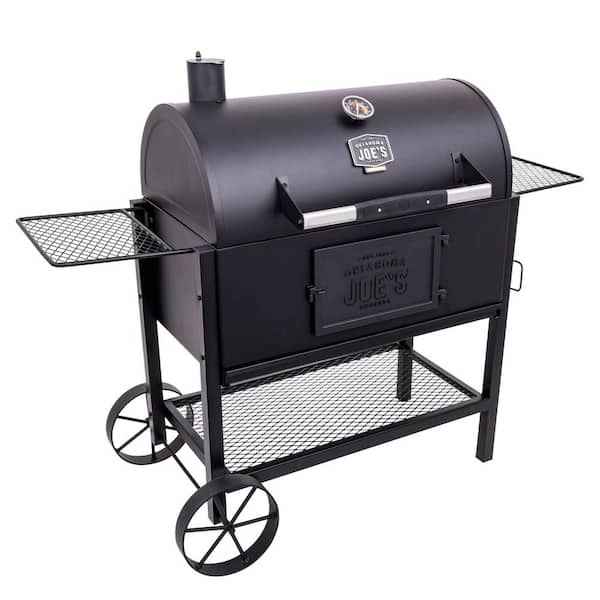 The OKLAHOMA JOE'S Judge Charcoal Grill combines superior control elements with heavy-duty, high-capacity grilling. Its rugged steel construction and thick cast-iron grates create supreme sear's for years to come. And between its height-adjustable charcoal tray and large air dampers, the Judge lets you choose between grilling over high heat or cooking low and slow. Since charcoal can be messy, the removable ash pan lets you clean quickly and get back to what matters.

Can I get this assembled

Do the side “shelves” fold down for storage?

Hello ErnieParks53, thank you for your recent inquiry with The Home Depot. The Judge Charcoal Smoker Grill in Black grate material and cooking grate material is Cast Iron. We appreciate your business and look forward to serving you in the future.

Customer review from homedepot.ca
Aug 13, 2020
Exactly what I looking for!
I had put a lot of time and effort into building a patio built in grill base and wanted to replace the cheap grill with a quality "forever" grill. I prefer charcoal over gas, but finding a good charcoal grill for a built in is not easy. I kept coming back and looking at the Judge, even though it is a stand alone model. I really like the look and features. I decided that I could make it work. Uppon arrival, the first thing that impressed me was just the weight of the box, this grill is built like a tank. I will admit, it was a bit unnerving to assemble a very nice grill like this and immediately make permanent modifications before even using it. I don't recommend doing this, and I think the manufacturer would agree. They say to measure twice and cut once, I think I measured 8-10 times at least. It was worth it. I have been cooking on it frequently all spring/summer. Making everything from ribs and whole chickens to burgers and dogs. It has fed as few as two people, and as many as 50. This is the best, most versatile charcoal grill I have used. The heavy duty construction holds heat and makes for consistant temperature control. Uses less charcoal because of the efficiency. I am certainly not suggesting that other customers make modifications like this, but maybe it would be worth it for Oklahoma Joe's to think about offering a built in version of the Judge. One last thought, I also bought the cover and just like the grill, it is very heavy duty and fits perfect.
by Lonestone.1971

Customer review from oklahomajoes.com
Aug 13, 2020
Good grill, needs help for smoking
I've had the Judge for about 3 months now and bought it because I wanted a charcoal cooker with more available grate space than my beloved Bronco. By far the best feature of this grill is the height adjustable fuel bin. You can do low and slow cooking or raise it up for a fantastic sear. A lot of versatility for grilling. Unlike a lot of the commodity charcoal grills on the market at a lower price, even a few that offer adjustable height fuel bins, this unit is made from stout materials that should last many years and not flex and twist when moved. At 170 pounds it easily outweighs those comparable sized cheapies by double because of the strength of materials. The construction though is a bit slip shod as I had to repair a broken spot weld on the very bottom panel when unpacking and assembling. As I commented in the Q&A section the lower portion of the housing and around the exhaust stack the Judge leaks like a sieve. That's why I said it needs help for smoking. I consider temp control very important for longer smoke periods on larger pieces of meat that this is sized for. With all those leaks temp management is very difficult. I ended up using a high temperature, food grade rtv sealing material to close those gaps as well as a nomex gasket on the lid. Once those minor improvements were done it became a reliable smoker that allows temp control for longer smoking periods. Bottom line; it's good value once some minor fixes are done. Needing to do those fixes cost one star from my rating.
by Uncle Bob

Customer review from oklahomajoes.com
May 9, 2020
Pretty good
Grill is great but has minor flaws top smoke chute needs to be set in then welded instead of welded then installed because weld keeps a small gap between plate and lid and tac welds for bottom that hold ash tray need to be bigger. And it has a little damage on inside of lid but overall good grill.
by Randy30

Want the ultimate control over your cookWant the ultimate control over your cook The Char-Griller Classic Charcoal grill gives you that and so much more. With a unique crank adjustable charcoal tray and a charcoal access door in the front, you can easily add more charcoal and wood to dial in your cook. Cast iron cooking grates take it to the next level and it is Side Fire Box adaptable so you can easily turn it into a Texas-Style offset smoker. After 25-years in the business, Char-Griller knows a thing or 2-about grills. At Char-Griller, we build durable products that last beyond the first grilling season. You can trust that you'll get-years of enjoyment out of your Char-Griller Grill and we look forward to you joining #TeamCharGriller.See Full Product Description