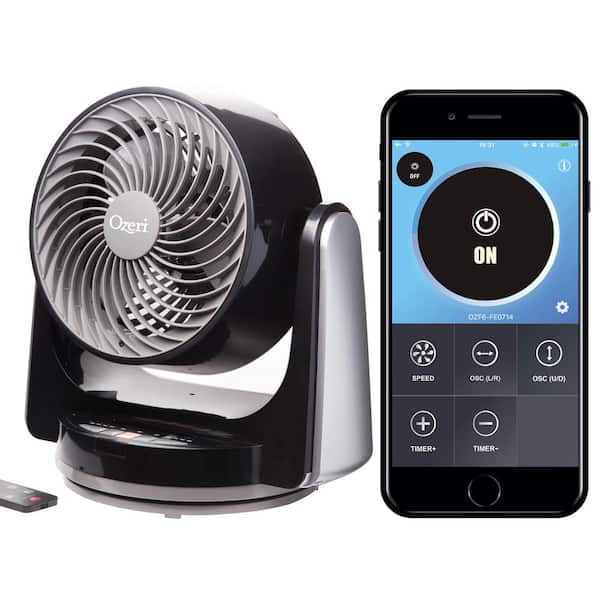 Ozeri proudly presents the all-new Brezza III Dual Oscillating 10 in. High Velocity Desk Fan with Bluetooth. With automatic horizontal AND vertical oscillation, the newly enhanced Brezza III continues to raise the bar in fan performance by delivering the widest distribution of cooling airflow. Built upon the success of Ozeris Brezza Series of desk fans, the Brezza III boasts 4 motor speeds, a 4-hour timer, a refined design, and the lowest noise output in its class. The Brezza III's dual oscillating motors ensure continuous airflow in all directions, liberating you from having to move or turn the fan to change the airflow direction. The Brezza III can also be set to single oscillation mode, or non-oscillating mode for uniformly directed airflow. The 4 speeds allow you to choose between a cool breeze, refreshing wind, a more powerful stream of air, and maximum cooling. The 4-hour timer allows you to set the fan for the hottest part of the day, or to turn off after you fall asleep. All the Brezzas features can be controlled via the free Ozeri iOS and Android smartphone app, the extended-range remote, or via the fan's control panel. With the Brezza III Dual Oscillating Desk Fans Bluetooth Technology, you never have to worry about misplacing the remote. Ships fully assembled and weighs only 6 lbs. for easy transporting.

Unlike an ordinary fan, a Vornado air circulatorUnlike an ordinary fan, a Vornado air circulator doesn't just blow air. Instead, it produces true whole-room air circulation using Vortex Technology, exclusive to Vornado. So rather than being in the breeze or out of the breeze with an ordinary fan, you get an even temperature and circulation throughout the room. The Vornado 633 air circulator uses signature energy efficient Vortex Technology to moves air up to 75 ft. while aerodynamically circulating all the air in a room, eliminating hot and cold spots. Ideal for small to mid-size rooms, such as a bedroom, kitchen or office. Operates at a whisper-quiet level. This air circulator can be placed on the floor or tabletop. The 633 has a three-speed control, fully detectable airflow and a limited 5-year warranty.View Full Product Description

Increase airflow in your home or office withIncrease airflow in your home or office with the High Velocity 11 in. Air Circulator. Three speeds let you customize the airflow as needed, the head pivots 90 for flexible air direction, and the compact design is perfect for desks and tables. Suitable for placement on a range of surfaces, the fan also features slip-resistant feet and a cushion on the base to help protect furniture.View Full Product Description

Unlike an ordinary fan, a Vornado air circulatorUnlike an ordinary fan, a Vornado air circulator doesn't just blow air. Instead, it produces true whole-room air circulation using Vortex Technology. The Vornado 293 HD Heavy Duty High Velocity Shop Fan has the rugged durability to stand up to the toughest jobs. Built for use in the garage, workshop or job site, its nearly indestructible body and durable steel base make it tough enough for any challenges. Now over 20% more powerful, moving air 100 ft. This multi-purpose 293 HD shop fan delivers a unique, high velocity air beam for cooling, exhausting, air pumping and power drying, optimizing its maximum performance capabilities. This shop fan has a ball-bearing motor that never needs oiling and is dust resistant. It can be placed conveniently out-of-the-way in any work area, with its compact size. This energy efficient shop fan 293 HD also features a carrying handle and a 10 ft. grounded cord for accessibility and grab-and-go portability. Includes 2 wall brackets for convenient off-the-floor placement options. During the hot summer months, the Vornado Heavy Duty circulator is sure to become your most valuable tool.View Full Product Description