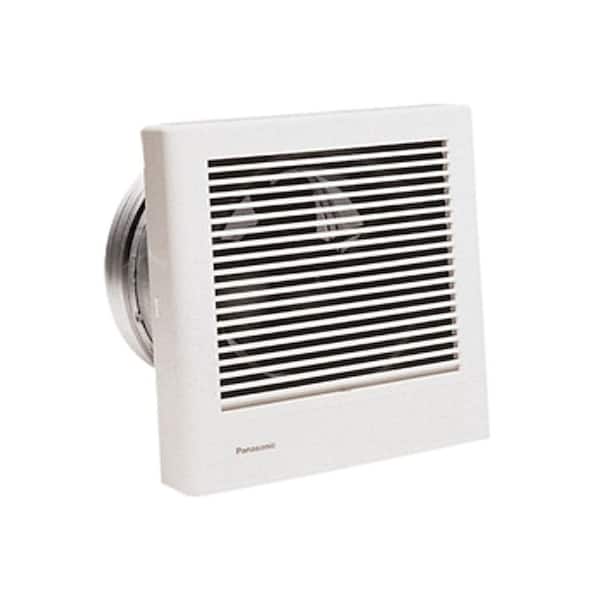 The Panasonic WhisperWall through-the-wall fan features a fully enclosed AC condenser motor for long-life. Designed to be quiet and energy efficient, this fan complies with Green building IAQ standards. A durable wall cap with a built-in back draft damper is included.

2
Filter by:
Showing 1-10 of 114 reviews
Dec 28, 2021
Good fan for a wall mount
Best for small bathrooms Installation went smooth A little bigger than expected Read the instructions 2 times for safety and saves times
by
Response from Panasonic TeamDec 30, 2021
We are glad to hear that you are enjoying the product, thank you for sharing your experience with us and the community! Happy New Year! -A

Sep 8, 2018
This fan is super-quiet and really well designed. Unfortunately, it is saddled with a manufacturi...
This fan is super-quiet and really well designed. Unfortunately, it is saddled with a manufacturing flaw and a manufacturer who won't take ownership of their faulty production issue. I noticed this defect upon first inspection. I knew this is supposed to be an EnergyStar unit, so I wanted to see how they accomplished sealing the unit to prevent heat loss. Turns out, they didn't. No way should this fan, as shipped, be listed by the EPA as an EnergyStar item. It should probably get an "EnergySuck" sticker, instead. If you don't mind spending an hour on fixing this energy-sucking leak from this supposedly EnergyStar wall mounted vent fan, then I think it's a great unit. However, as delivered, I'd recommend you not install it because the giant gap in the insulation will allow your house air to leave your building and for cold drafts to enter when you're trying to have a bath or shower. I contacted @Panasonic when I noticed the error. I pointed out that as a production engineer, this looked like the sort of thing that wasn't an installation or design error, it was systematic production problem. I was told by Paulo De Souza.at Panasonic to return the fan under warranty because of the defect. Paulo did not identify whether he had brought the production issue to his production engineering or quality team, so I requeried him to make sure he had done so and that I wasn't going to get a second unit with the exact same error. Paulo replied that it was a one-off error and to return the unit for a replacement. I returned the fan and ordered another one (that's how Home Depot does warranty replacements apparently). Of course, the second one arrived with the exact same defect as the first one (pictures of the large gap between the foam insulation pieces in the exhaust shroud flap are pictured below. I was livid! Clearly, Paulo had lied about checking that there wasn't a production issue. I expressed my displeasure to Paulo and insisted that he send me a properly manufactured fan shroud/flap mechanism along with tracking information and a prepaid shipping label for me to return the defective one. And that's when Panasonic's Paulo De Souza stopped communicating with me. That's not the sort of customer service I expect from a company like Panasonic, especially when I took the time to document their production defect and inform them that they had a production defect, only to get ignored and told "nah .. everything's good on our end." Except it isn't. If you don't mind disassembling the housing, fixing their production defect, and re-assembling it, then it's a really nicely designed unit. It's too bad that, outside of the engineering department, nobody else seems to give a care about their production accuracy and quality. Panasonic has had over two weeks to look into this error and they've done nothing but claim they don't have a production issue. I'm very fed up with trying to deal with an unresponsive vendor who clearly lied to the EPA about their product's energy consumption and waste profile.
by
Response from Panasonic TeamAug 30, 2021
Thank you for the review. Please reach out to our Customer Support for assistance.

9 people found this helpful
Sep 8, 2016
Efficient bath fan
I debated whether to rate this fan with 4 or 5 stars mainly on the appearance. It sticks out a few inches from the wall with a bunch of stickers showing on the bottom edge. But it works really well and I can remove the unimportant stickers, so sticking with 5 stars. I am not handy so I hired an electrician which was costly since the former fan was smaller. But totally worth not having a fan that sounds like a jet engine. This one is so quiet I double check to make sure I turned it on.
by
Response from Panasonic TeamJul 15, 2021
To be able to get support for your Vent Fan, please reach out to the Panasonic Customer Service for Vent Fans during 9AM - 6PM (EST) Monday through Friday via Phone: (866) 292-7299, or via Fax: (888) 553-0723. You can also Email them at: ventfans@us.panasonic.com .

Say goodbye to unbearable heat and humiditySay goodbye to unbearable heat and humidity in the garage, unwanted smells in the kitchen and odors in the laundry room, rec room or garage. The Broan 290 CFM Through-Wall Ventilation Fan is the perfect solution for rooms up to 285 sq. ft, including one car garages, or use for spot ventilation near areas such as a work bench, garbage can, car, or lawn mower. The durable galvanized steel housing provides superior protection against the elements and wear and tear. It features a built-in exterior wall cap/vent which reduces install time, no duct work needed. Customize your fan with one of Broan-NuTone's wall controls. For automatic operation, choose from a humidity or motion sensing control. To automatically turn off the fan after you leave the room or garage, pair the fan with a delay-off or countdown timer. (Wall controls sold separately.)See Full Product Description

The special Energy Star rated Cyclone's HushToneThe special Energy Star rated Cyclone's HushTone bath fan is powerful enough to handle the most irritating pollutants and potent odors with a powerful 140 CFM fan that keeps the air your family breathes fresh and circulating at all times. Your super quiet HushTone bath fan will stay on continuously at a very low CFM when left off and will ramp up to its maximum CFM when powered on. A durable and long-lasting DC motor with Cyclone's flow-through technology always performs to the highest standard. When the Cyclone HushTone bath fan senses static pressure the fan speeds up to compensate and reach the designated CFM. In addition, the fan can be set to either 80, 90, 110, 120 or 140 CFM before installation; allowing you to customize and optimize your bath fans power to suit your family's needs.See Full Product Description

WhisperCeiling DC fan, Pick-A-Flow SpeedWhisperCeiling DC fan, Pick-A-Flow Speed Selector with 110, 130 or 150 CFM airflow. Quiet and powerful, this spot ventilation fan has less than 0.3 sones at any speed - 110, 130 or 150 CFM. The brushless ECM Motor is rated for continuous run and has SmartFlow Technology. Fan includes the Flex-Z Fast installation bracket and a 4 in. or 6 in. duct adapter. Ideal for use in many rooms: bathroom, laundry room, sun room, media room, mud room, basement or garage.See Full Product Description

FV-1115VK2 - Whisper Green Select EnergyFV-1115VK2 - Whisper Green Select Energy Star and HVI (Home Ventilation Institute) rated exhaust fan is your solution for ventilation in medium to large size rooms. This Panasonic fan is powerful, quiet, energy efficient and easy to install. It is ideal for use in the bathroom, laundry room, sun room, basement or garage. The Pick-A-Flow Speed Selector offers flexibility with its customizable airflow 110, 130, or 150 CFM - one fan you choose your CFM. It combined with Smart Flow Technology simplifies the selection process and ensures optimum CFM performance to meet codes and reduce callbacks. This fan is for ceiling installations and the elegant grill design compliments any room design. It is UL listed for over a tub/shower enclosure when used with a GFCI protected circuit. The FV-1115VK2 meets stringent green building codes and standards including ASHRAE 62.2 LEED Energy Star for homes 3.0, IAP, JA8 Title 24, California Title 24 and the WA ventilation code. Plug 'N play modules are available and easy to install. Options include a smart action motion sensor (FV-MSVK1) a multi-speed with time delay (FV-VS15VK1) and a condensation sensor (FV-CSVK1). These must be purchased separately.See Full Product Description