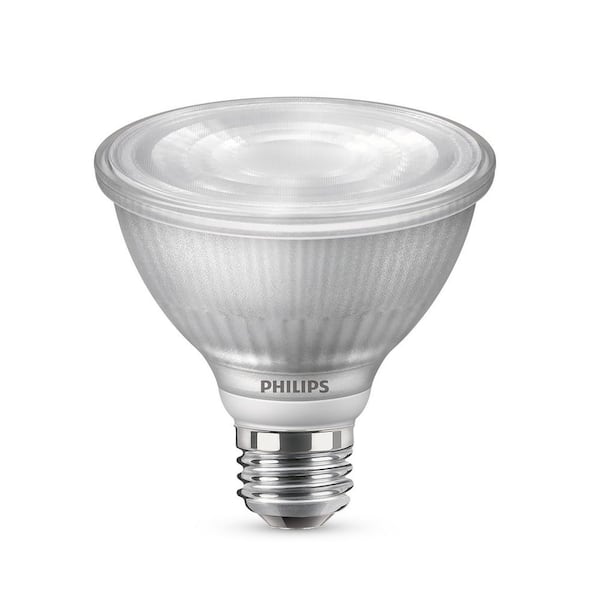 Just bought 4 of these to replace standard PAR30S bulbs in recessed fittings in a high (~18 foot)...

This is an answer to Phillips Lighting Team reply. That is exactly the same telescopic pole and suction cap that I use. However, the suction cap will NOT work with the Phillips LED bulbs due to the contoured surface of the bulbs. Also, the grabber attachment that comes with that pole set doesn't fit these bulbs well and also will not fit within the recessed lighting fitting in my house.

Are these "full range" dimmable? I want to replace some halogen par30s bulbs in a rec room that ...

I think the answer depends on your dimmer. When combined with a LED compatible dimmer, you can adjust them to dim pretty low. Probably not quite as low as a halogen but pretty close I think.

Is this bulb compatible with Lutron Maestro LED+ digital dimmers with HED tech?

I am using a Lutron Caseta LED reverse phase dimmer and it works extremely well. No flicker at all, clean dimming. From looking at the specs, the "Lutron Maestro LED+ dimmer" I see is phase selectable (assuming you're talking about LUT-RRD-PRO models) which are sold as Maestro LED+. As such, it should be same or similar dimming performance to the Caseta. I haven't found any major problem with dimming performance in either forward or backward phase with these bulbs (I have with others).

What is the illumination angle? 40 degrees?