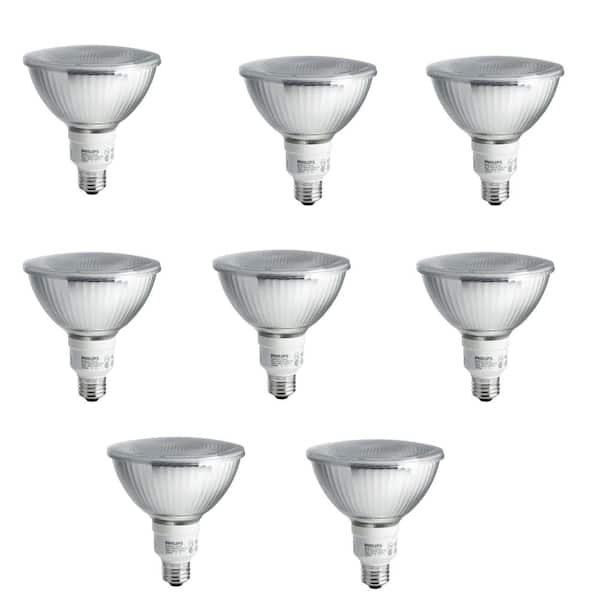 The Philips 90-Watt Equivalent PAR38 CFL Light Bulb features a medium base and is ENERGY STAR compliant, delivering 1300 lumens of soft white light at just 23 watts. Each bulb in this set of eight is designed for long-life illumination of up to 10,000 hours and can be used indoors or out for versatile lighting options. Using 74% less energy than standard incandescent bulbs, this energy-efficient set can save you up to $160 over the life of the bulbs and offers a 9-year limited warranty for added peace of mind.

It is good to -4 F The bulbs will take longer to come to full brightness at low temperatures.

Are there any left in any stores in Colorado Springs? The website won't let me search for it, because discontinued

Thank you for your recent inquiry with The Home Depot, Amber. This bulb is discontinued and no longer available. We appreciate your business and look forward to serving you in the future. Thank you for shopping Home Depot.

so this contain mercury

Can I get this light with a "Frosted" lens or glass?

It's a flood light, so the lens has inside dimples to scatter it.

2
Filter by:
Showing 1-10 of 15 reviews
Apr 23, 2013
Overall a good value
I installed these bulbs in can lights over a bathroom vanity. The light output is good, although it does take about 1 minute for them to get to full brightness. There is also a slight variation of the "warmness" of the light color from bulb to bulb. The price was cheaper than most similar options I found. A wholesale club is the only place I found them cheaper. Overall I am pleased with the bulbs though and would buy them again.
by TooBigForThisDoor
2 people found this helpful
Aug 17, 2016
Great product
Good light, good price. Would recommend to anyone needing these kind of lights
by Xtremeaccord
Aug 16, 2016
Good value for money
While it seems CFLs are on their out, these seemed like a good value for the money until they can no longer be found. I guess disposal is the big problem for CFLs.
by skc7
Jul 19, 2016
Long Lasting Lamps
These lamps are longer lasting and more energy efficient than the regular Par lamps.
by Shelly

1 person found this helpful
Apr 26, 2016
90W Equivalent Soft White (2700K) PAR38 CFL Light Bulb (8-Pack) (E)
Excellent product for very good price. Quick delivery and easy to install. Power saving is over 75%.
by RAJ
Mar 6, 2016
Pair failed within two months. They were available in a twin pack at the time.
Installed outdoors in a new fixture. First one failed within two weeks, and the second, four weeks later. The second one had moisture inside with no discernible hole. While I have been quite satisfied with Philips bulbs in the past, I would steer clear of these. I replaced it with a Cree LED that puts out an incredible amount of light for 23 watts.
by xny89

Dec 8, 2015
Great CFL Flood Lights
I have been using these CFL flood light bulbs in my security lights around my house for quite a few months now and have had great results. Very bright lights once they warm up and I have no complaints yet.
by KeerDilla

Oct 6, 2015
It's a good buy.
It's very easy to install and very good quality light bulb.
by bliss
Aug 14, 2015
Poor - Stay away from this bulb
Have gone thru multiple packages of these bulbs, water gets inside bulb and then it shorts out. Has happened with multiple bulbs from multiple packages.
by larryD
Apr 27, 2015
POOR QUALITY LIGHT
NEEDED 60 BULBS OF THIS STYLE FOR A BIG PROJECT. 1 CASE WAS BRIKEN DURING SHIPPING AND HAD TO BE RETURNED, AND OTHER11 LIGHT BULB FAILED INSTANTLY.
by HomeDepotCustomer