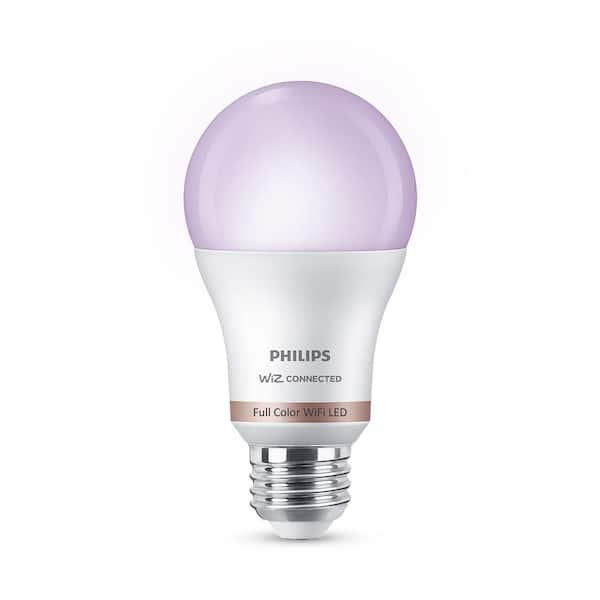 Philips Smart Wi-Fi LED lighting puts you in complete control of your lighting with smart bulbs that are easy to use, functional and affordable. We've made all your favorite high-quality Philips bulbs smarter, just connect them to your existing Wi-Fi network. Smart Color and White Light - Live life colorfully. Dynamic light modes make any room glow in your favorite color. Control your lights wherever you are using the WiZ app or your favorite compatible voice control device. Product requires a WiFi connection to operate wirelessly. Compatible with WiZ apps and products along with Google Assistant, Alexa and Siri Shortcuts.

162
Filter by:
Showing 1-10 of 1,125 reviews
Jul 3, 2021
Get a different brand or Hue bulbs instead
I hate to give these a bad review, but they have a tendency to stop working either due to a forced firmware upgrade or some other insidious reason a few months after use, or even up to a year after use. And because the firmware updates are literally out of your control, I would not recommend buying these. What's the issue? The RGB LEDs may eventually cease to function at low brightness settings, anywhere below 25% brightness I would estimate. If you use these as colored night lights, you'll eventually be forced to use white light with just a hint of color. Up the brightness to 50% or so and you're able to get the full vibrant color that you expect at all brightness levels. When you turn the light on, you'll briefly see the color illuminate but it will quickly extinguish itself and return to white. At this point, fade-on and fade-out effects are also completely broken as the RGB and white LEDs turn on and off instantly rather than fading. I can't tell whether this is simply a defect or a firmware issue, but I recently had six bulbs fail at the same time, but currently all 9 of my WiZ lights have this issue. Support inside the Android app is impressive, with the tech support representative being able to access your setup and suggest troubleshooting steps. However, I felt as if they weren't listening to my issue; almost like they're required to follow basic steps and not actually try to understand and isolate the issue and make relevant suggestions on how to fix it. I then tried reaching them by email, but unfortunately received a response telling me to use the built-in chat support. I would not grade their support favorably. Basically, don't expect these to work under low brightness indefinitely because they'll probably disappoint you. I don't plan on purchasing any more of these.
by Logan
1 person found this helpful
Mar 18, 2021
These lights required the installation of the Wiz app on...
These lights required the installation of the Wiz app on your phone for setup but work perfectly with Google Home or Alexa. The lights are completely customizable with the Wiz app and once setup is completed are easy to control using Google Home. I love controlling the lights using my voice and plan to purchase more for the other rooms in the house.
by HomeDepotCustomer
Jan 14, 2021
Like all of this type of LED bulbs, you just get half a light instead of a full bulb. I have them...
Like all of this type of LED bulbs, you just get half a light instead of a full bulb. I have them in the coach lights on the garage and they aren't bad, but still prefer the look of a full bulb. That being said, it was overall a quick and easy setup to get them operating after downloading the app. I like the variety of choices, not only in color, but in types of light, dimming capabilities, and patterns. It is much more convenient to change the colors for special events and holidays instead of buying bulbs of each color. Several neighbors have done the same thing so we can coordinate our efforts to honor groups such as LEO, military, healthcare workers, etc. as well as celebrate the holidays. So far they have performed well and very happy with the ease of using the app for the lights and also the ability to add new devices later on.
by JBoy21078