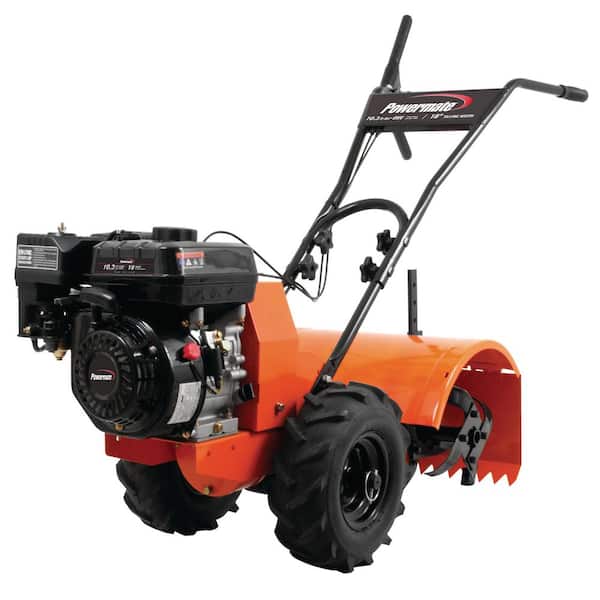 The Powermate Rear Tine Tiller is the perfect tool for any job from gardening and light tilling to hard groundbreaking work. The 10.3 ft. per lbs. 4-Stroke OHV engine is both powerful and efficient. The gear-drive system provides maximum fuel and engine efficiency, allowing the unit to run on less power input than when operated manually and the gasoline-powered engine allows the user to till a large area in little time. This powerful tiller works to complete the job quickly and effectively while still being easy to maneuver. The 11 in. counter-rotating tines dig deep into the earth to remove weeds and allow for fresh soil to be upturned and the 13 in. heavy duty, pneumatic tires stabilize the tiller over rough terrain. This machine boasts an 18 in. tilling width which allows the tiller to cover a large amount of space in 1 pass while still being easy to maneuver and capable of making sharp turns. This tiller makes easy work of any garden or groundbreaking project.

My tiller will not move forward

Please contact Product Services at 800.737.2112 for assistance with your tiller.

The tires on my tiller have locked up and now I can't get the motor to start, what could the prob...

The wheels should be locked in order for the tiller to operate properly. Whether they are locked or not doesn’t have anything to do with the engine starting. Please call our customer care at 800.737.2112 to help you trouble shoot your issue.

Used in spring and ran good. Stored for 4 months indoors. Tried to crank recently and the engine ...

Hum, non in stock univalible for shipping to store , how can i get one!

Due to high demand this season this product is currently out of stock.

When will you stop advertising this tiller, since NOBODY has one and Home Depot can't order them?

We are sorry for the inconvenience. Tillers are in high demand this season due to current events. Keep checking back with your local retailer and online to see when they will be restocked.

Does this use straight gasoline, or an oil/gas mixture?

For this Powermate Rear Tine Tiller, use only fresh unleaded gasoline with an octane rating of 87 or higher. Do not use gasoline containing more than 10% ethanol. Use of non-ethanol fuel is best. We recommend the continuous use of a fuel additive /stabilizer to counteract the effects of ethanol.

The Operator’s Manual included with the Powermate PRTT212 Rear Tine Tiller list two options for the transmission oil (gear oil). These are listed on page 5 and again on page 17. Either SAE 85W-140 or SAE 90W-140 can be used.

where do you buy tire for powermate?

Powermate Parts, call 1-800-737-2112. They are two different tires-left and right: Tiller Tire, 13” Right (Determined from Operator’s Position) A200809 Tire, 13” Left (Determined from Operator’s Position) A200597 They are 13x5.00-6 but the tread pattern looks special to this tiller, not a regular trailer tire. If you don't have it already you need to download your parts manual at: IPB_RearTineTiller_PRTT212.pdf

When will the Power mate 18" tiller be available to purchase?

Unfortunately, due to exceptionally strong demand, this item is out of stock for the 2020 season.

how can I purchase this powermaye tiller? Where and how?

At this time you will need to call into your local Home Depot to see what there inventory is or if they can tell you where the nearest product is located.

The Colt' garden rototiller features a powerfulThe Colt' garden rototiller features a powerful 208 cc Troy-Bilt OHV 4-cycle engine and patented Bolo tines that cut through soil with ease, resulting in finely tilled, well-aerated soil. The Bolo curve design allows the tines to cut and dig at an offset angle for groundbreaking while the swept-back angle turns under the soil. With adjustable tilling widths, chain drive transmission and ability to till up to 7 in. D, the Colt' front-tine rototiller is designed for premium garden soil preparation.See Full Product Description

The garden of your dreams starts with greatThe garden of your dreams starts with great soil. Turn hard, packed dirt into beautiful, bountiful gardens and cover more ground in less time with the Mantis XP Extra-Wide 4-Cycle (Gas only) Tiller. Just as powerful as a front-tine tiller, but easier to use. Designed for larger gardens its 16 in. width makes short work of big garden projects. Unique, curvy tines easily break through new ground and sod, compacted soil even hard clay. Flip the tines to power-weed and cultivate. Soft, Sure-Grip handles are height adjustable and designed for comfort. Convenient fold-down handles for transport and storage.See Full Product Description