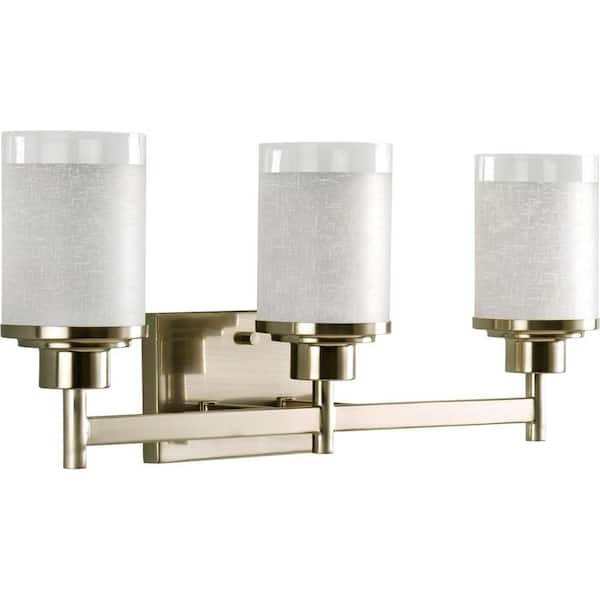 Hello Rhonda - This fixture only comes with the umber linen finished glass. Thank you for your inquiry.

Will the shades look white if you use a clear lightbulb? I don’t want a cream color.

really will depend on type of light bulbs you use. we are playing around with different types of bulbs

What color do the shades look like when lit? I've seen 'cream' colored shades that turn overly ye...

Thank you for your recent inquiry with The Home Depot. The P2998 uses 4 100w lights, these will put off a light umber glow, if using an LED depending of the LED used (warm vs daylight) could change the color of the glow. Thanks!

do many hang this fixture with the lights down? I don't have high ceilings in my bathroom

I hang the fixture toward down in 2 bath rooms

What is the diameter of the globes? How far out from the wall do the globes come in total? The pr...

Do u have this instock in Fremont California

I will be installing a medicine cabinet with the depth being 6" from wall, will this be too short in depth to use above?

Yes. I would buy the 4 lamp version. If they had a 5 lamp I would recommend that.

It appears as though there is a linen pattern to the glass cylinder but I can't tell about the outer ring.

The last half inch us clear

Can this fixture be mounted upside down, with the lights pointing downward?

Customer review from homedepot.ca
Feb 10, 2015
Modern update to our powder room
I am happy with this fixture. It showed up just days after I ordered it, no issues with the packaging or the fixture. Everything came in one piece - no damage. The fixture was easily installed in a short amount of time. I was concerned because I saw other reviews that said it came with screws that were too long. I found this not to be the case. Instead it's a case of poor instructions and DIY'ers that don't understand how these fixtures are supposed to be assembled. The fixture comes with two screws that are "too long" to accommodate any possible depth the electrical junction box may be recessed into the wall (including varying depths for drywall, ceramic tile, back-set into the wall cavity). The trick is to screw the two screws into the mounting plate to what is the proper depth for the screws to reach the decorative nuts that hold the fixture in place. You then take the two hex nuts and screw them on the screws until they are tightly against the mounting plate (this step is not included in the instructions). This is called "double-nutting". It secures the screw to the plate at the proper depth and locks it in place. Once this is done, installation is fairly simple. I mounted the fixture with the glass facing down so they wouldn't become dust-collectors, plus I like the down-look better. In the picture you can see that I used the matching ceiling light as well.
by Dutchboy

9 people found this helpful
Apr 10, 2014
Looked great for a while
At first we were very happy with the two fixtures we put in our bathroom. After only a few weeks the little caps over the screws rusted. Company sent replacement caps. Now the whole fixture is rusting on both of them Have sent photos to Progress but they didn't sound like they would do anything about it when I spoke with them on the phone. This should not happen to quality fixtures in just a little over a year - or ever. Hope they will do something about it.
by Bob23
10 people found this helpful
Nov 8, 2013
Great Value
Nice quality. Glass is heavy and substantial. Carefull on lightbulb size. Mine were big and they stick out.
by Symphony
5 people found this helpful
Oct 29, 2013
Looks good Installs rough.
This light makes a nice difference in our bathroom. The style fits perfectly with what we are trying to accomplish as we update. We were somewhat concerned with the "linen" finish on the light covers, but it looks great. I highly recommend the light, but the install, well, read on. Installation was problematic. There are two long bolts that hold it to the round wall plate. The bolts go in the same holes as the ones that hold the plate to the wall box so you can't use those holes to connect the plate to the box since the holes in the plate are threaded for the bolt. I ended up pulling the nails out of the wall box so I could rotate it. Luckily some of the slots on the supplied plate are at the same distance from the center of the plate as the threaded holes for the bolts that came with it so I could use them to fasten the plate to the rotated box. The bolts that come with the light are too long if you completely thread them to the plate. We discovered this after the fixture has been connected electrically so we had to take it back off, shorten the distance they screwed in and put it back up. There are two nuts that come with it that are meant to be used to tighten the bolt against the plate so the bolt won't turn when you tighten the cap over the light when you put it up. You could probably let the bolt turn as you screwed on the cap, but that idea made nervous. I want a solid connection. The directions do not show this nut in the drawing so you have to realize what it's for without help. This light fixture (3 light) is heavy. I wouldn't attempt to install it without a second person helping. The directions are the worst I've ever seen. No text, just pictures that don't show the nut. So, yes, buy it if you like it. Just be prepared for an install that is harder than most.
by TiredOfIt
8 people found this helpful
Sep 25, 2013
Very good quality, looks great
We ordered two of this lighting fixture for our bathroom on line and picked it up the next day at a local Home Depot. Was a little surprised as to how heavy and big the boxes were, but it reflected the quality of the product. There was very little to assemble and the metal is high quality. We installed them so that the light openings face downward and it still looks great. Installation was a 2 person job.
by Karen

Easily install this Hampton Bay 3-light bathEasily install this Hampton Bay 3-light bath vanity to upgrade your bathroom with elegance. You can install it with the shades in the up or down position. The steel construction is long lasting and this wall fixture is rated for damp locations. It features a protective brushed nickel finish and frosted glass shades with rings.See Full Product Description

The Hampton Bay Cade Collection exhibitsThe Hampton Bay Cade Collection exhibits transitional style vanity lighting that will upgrade your bathroom or powder room with elegant style. The Cade 20.25 inch vanity bar uses three 60-watt bulbs, each of which is shaded by white frosted glass. The white glass is complimented by a classic, brushed nickel finish that will easily coordinate with existing bathroom styles. The cylindrical shaped shades are open at the bottom, allowing access to change the bulbs. The shades are held in place by a straight arm connected to a rectangular backplate which features matching line detail present throughout the piece. This vanity light bar can be mounted with the shades facing upwards or downwards for a customizable look.See Full Product Description