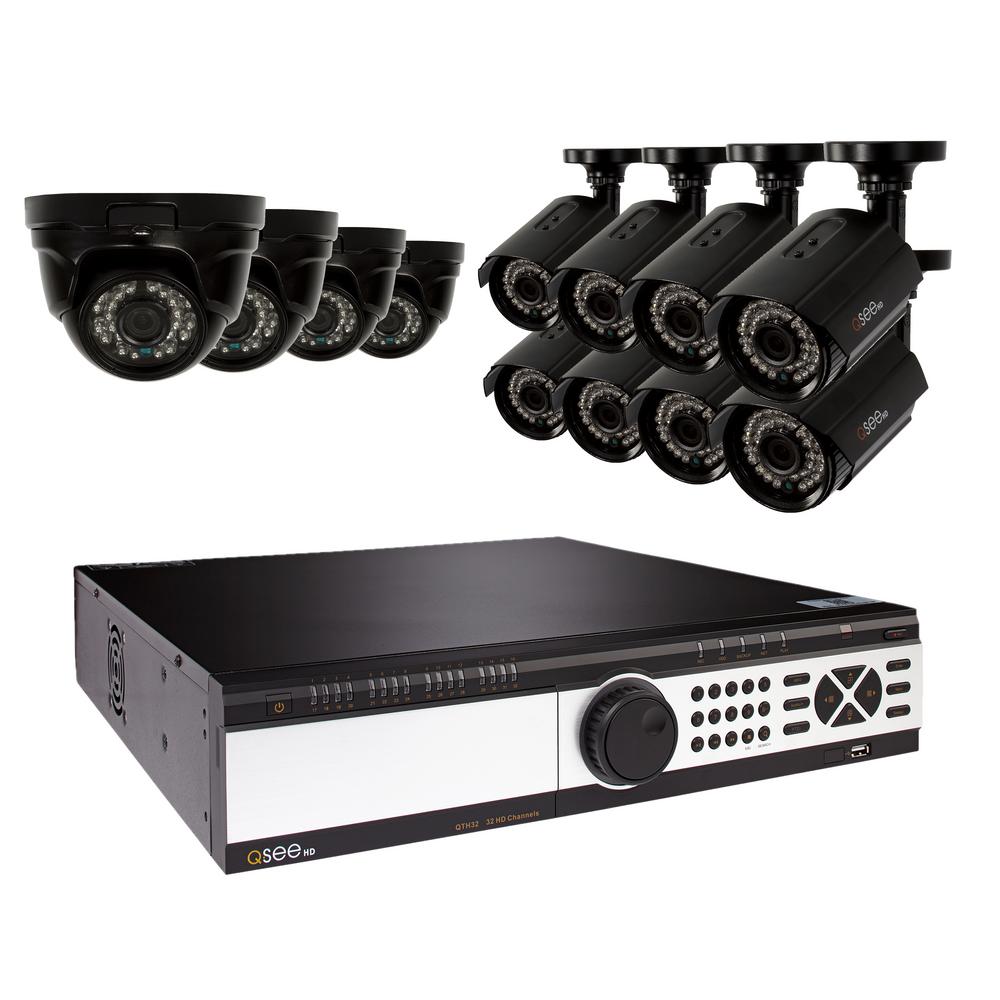 It’s attention to its security surveillance technology. Let’s change that today. By going with our 32-Channel Analog HD DVR Bundle, you’ll be able to cover all of the most important aspects of your small to medium business. With Eight HD 1080p Bullet Cameras and Four HD 1080p Dome Cameras, a constant surveillance will be completely at your fingertips. This system comes with a total of 12-cameras but allows up to 32 in. total giving you room to expand and customize the future of your security needs. Monitor through various devices (Laptop, Desktop) across the world including directly through your Smartphone (iOS or Android). Let Q-SEE make your life easier by providing you with a smart security system advantage.

I need only outdoor cameras. Are all cameras, the 2 bullets and 4 dome cameras for outdoor use?

The bullet cameras are great, not happy with dome cameras. They do not seal. Never received the It’s standard warranty.

Is there a monthly fee ?

What are the dimensions of the DVR?

Does it hve a plug in for a hdmi coed so I can plug it into a computer monitor and view live feed?

Yes, it has a plugin for an HDMI cord.

The cameras connect to the system box with the included cables. The cable provides power to the camera and signal to the box. If a longer cable is needed, you can easily add additional cable. I did not need to add any cable as the included cables are good length. The box plugs into power and Ethernet from your router. I was able to get everything set up in a few hours which included crawling in the attic to run the cable to the soffit.

is this for outdoor use also (waterproof, sun, dust etc) or just for indoors

This is also for outdoor use.

If you already have 4 cameras installed you can’t add any more because it’s a 4 channel.

are these cameras with wi fi

No, it doesn't have WiFi.

can I operate this system from my laptop computer running windows 10? If so where can I locate th...

Yes, you can operate this system from your laptop computer running windows 10.

Serious surveillance system with easy installation but poor customer support and software
February 8, 2017
Quality :
3
Value :
5
Seeds Program Review
(What's this)
This kit provides all the parts needed to set up an extensive surveillance system. 12 cameras, a DVR, computer mouse, power supplies and wiring. All seemed to be well engineered and designed. The instructional material included a sheet that seemed to apply to a different product, instructions to register for support and a link to a website to get information. I dutifully registered and explored the poorly designed website that had downloads for many different systems but was unable to find anything for this system. However looking at the parts it was obvious how they should be connected, there was no room for error. I connected up two cameras and hooked the DVR to a computer monitor (not included) and plugged the mouse into the DVR and connected the DVR to my router and applied power. The monitor immediately showed the views from the cameras and displayed a dialog to set up the time and a new user name and password. The problem was that before I could do anything I had to sign in. The default username was ADMIN, but I still needed an initial password. It was not written on the unit, as it often is for routers. I tried 'password' as the password- it was rejected. The website did not have the information. I contacted customer support via live chat and was put on a waiting list and given a reasonable time estimate and watched myself move up the queue. An hour later, it was my turn, but instead of getting the answer I was informed that my query had been cancelled. I tried again with the same result. Web searching quickly revealed that the default password was 123456, maybe I should have guessed that. Then I was able to proceed, setup the device and download an app for my phone. To be fair to the company, I subsequently found that the password was on the sheet that I had for another product. Controlling the system with a mouse worked flawlessly, the image quality is good, though the user interface is awkward. The phone app was well designed, making it much easier to zoom in on a past event, except that there seems to be no explanation on how to do it- you have to figure it out for yourself. There are some problems. The phone view always lagged by at least a minute and frequently froze for long periods. So the 'remote viewing' feature is largely useless. I can guess why it didn't work for me. Living in a rural area, we have an upload speed of 500 kbs and a download speed 10 times faster. In a city where both speeds could be much faster, others may have satisfactory results. However I know that with better software design this system should work much better, as I have a another surveillance camera with built in memory that is able to produce usable remote imaging by adapting the image quality and frame rate to accommodate lower bandwidth connections. Despite poor customer service, documentation and software, this system will be a useful addition to my home surveillance system and with improved software and support it will be a first class product.
Pros: Easy Installation, Nice Design
Cons: poor software, poor customer support
Was this helpful?
12
0
Review this Product
Share your thoughts with other customers 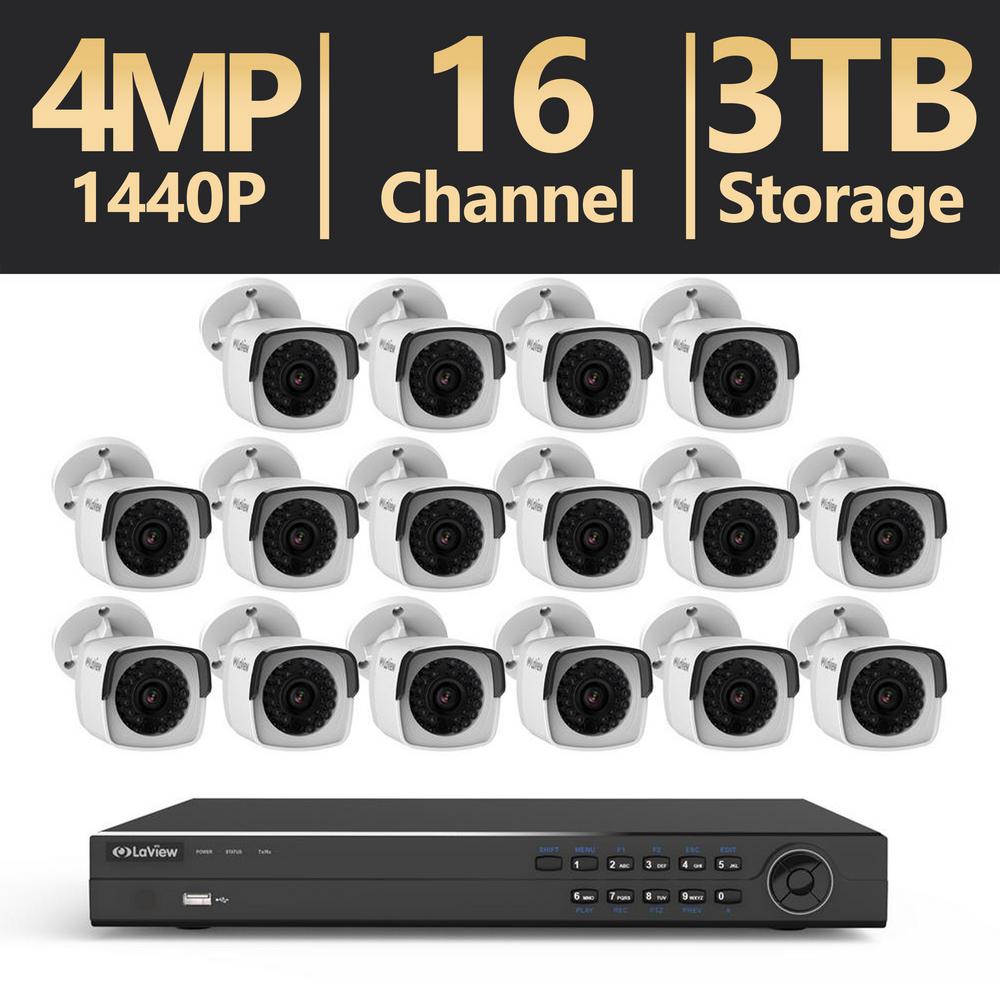 Protect your world by owning this all-advancedProtect your world by owning this all-advanced security camera system designed for business or home. Enjoy DIY easy installation with free mobile app, to ensure you stay connected to what matters the most to you. The camera is applicable for both indoor and outdoor usage with rating of IP66 - meaning the camera is applicable in both summer heat and winter storms.Product Details 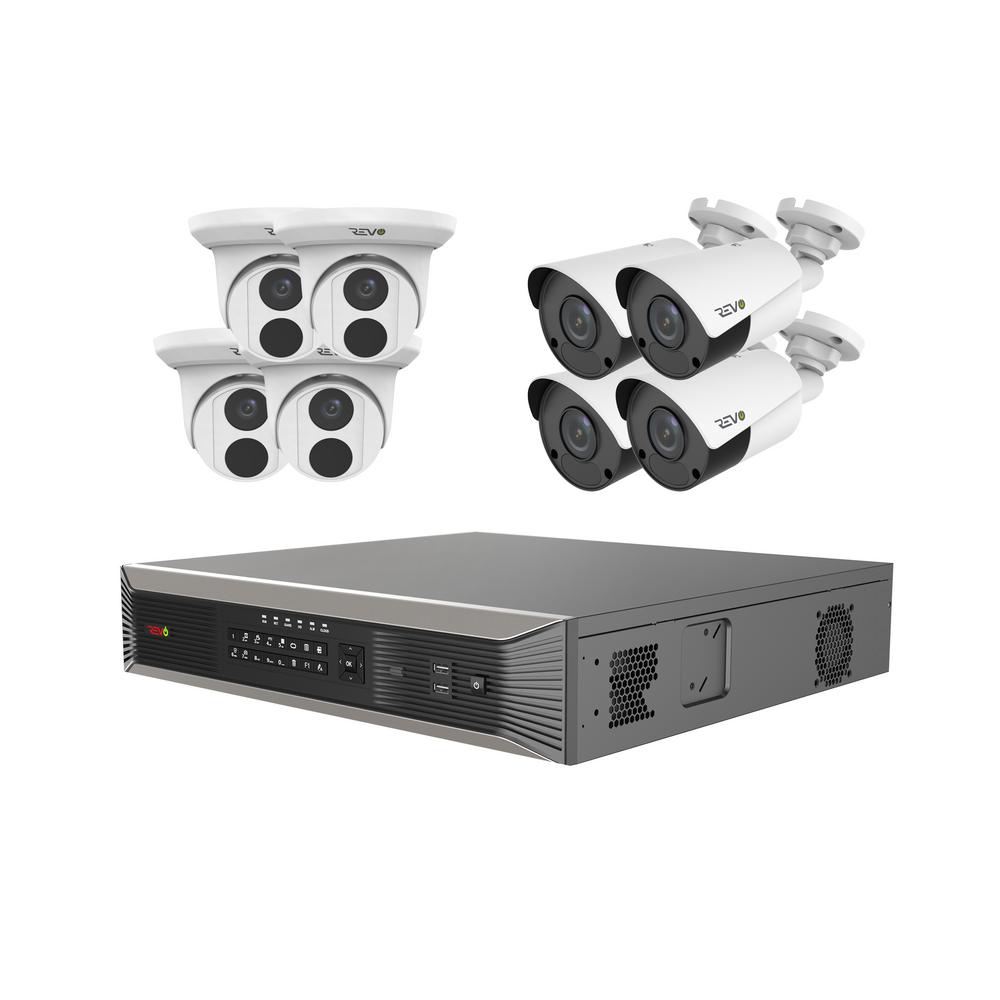 With incredible video quality, ease of use,With incredible video quality, ease of use, and powerful networking tools, Revo Ultra is the very best that Revo has to offer. Enjoy additional professional and premium-residential features with Revo Ultra Plus. The Revo Ultra's superb video quality is based on IP technology. The RUP161T4KB4K-4T is a complete plug and play smart HD surveillance system with 16 channel 4K smart NVR, 4TB and 8x 4K HD Indoor/Outdoor Cameras. Revo Ultra Plus NVRs feature state of the art 4K Video Output, H.265 Compression, support up to 12MP Cameras and up to an astounding 32TB of Hard Drive Capacity (4TB Pre-installed). The Indoor/Outdoor cameras feature massive True 4K Sensors, 2 times the resolution of 4MP Cameras. The built-in Professional Grade OSRAM LEDs and IR anti reflection glass strongly illuminate the scene up to an unprecedented 100 in total darkness. The Turret camera feature a 2.8 mm fixed lens which provides a 105° angle of view. The Bullet Camera feature a 4 mm lens which provides an 80° angle of view. The cameras are built for the outdoors capable of handling temperatures as cold -40°F and as hot as 140. View your Revo Ultra 4K cameras from anywhere. Using the Revo Ultra Mobile smartphone app, simply set up an account and then scan your NVRs QR code to begin mobile viewing. Access your Ultra NVR via the web using www.myrevocloud.com. Experience Peace of Mind with the ultimate high resolution IP technology from Revo.Product Details 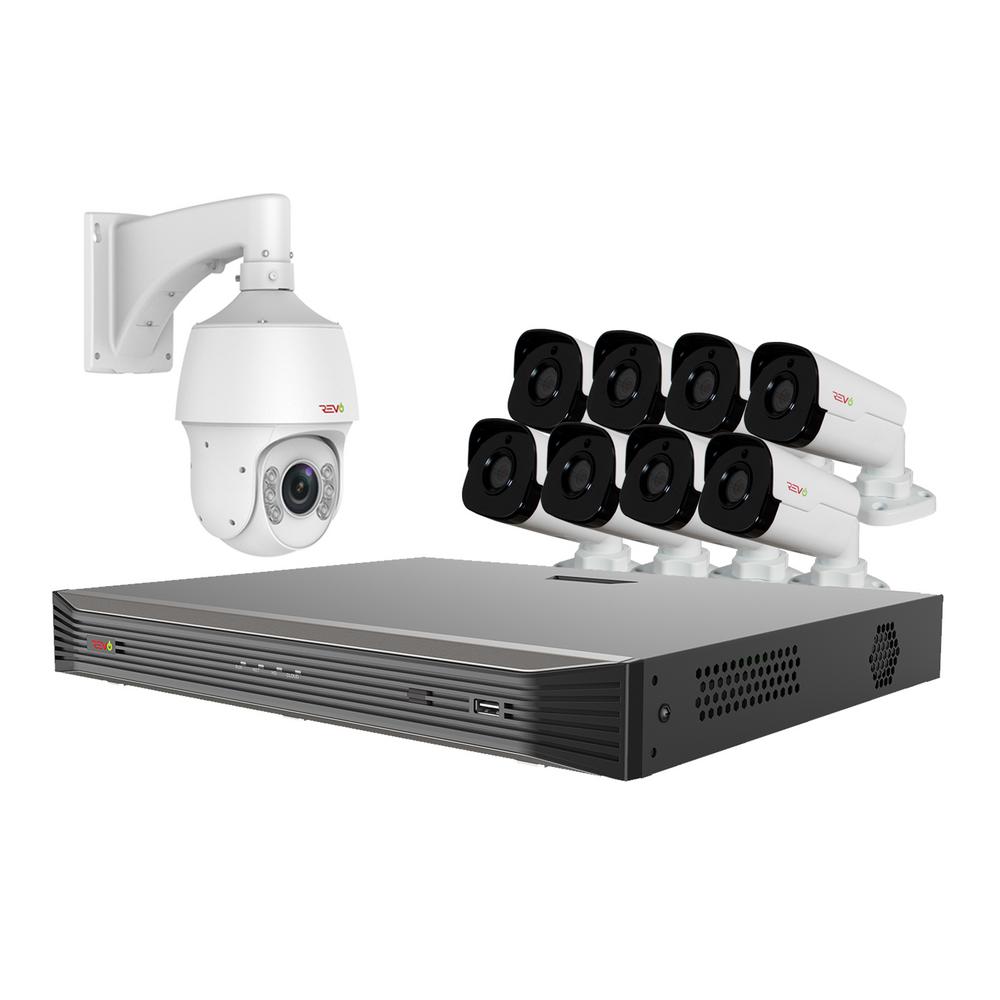 With incredible video quality, ease of use,With incredible video quality, ease of use, and powerful networking tools, Revo Ultra is the very best that Revo has to offer. The Revo Ultra's superb video quality is based on IP technology. The RU162PTZBNDL-1 is a complete plug and play SMART HD surveillance system with 16 CH 4K NVR, 3TB and 8x 4MP HD Bullet Cameras and 1x 22x 1080p PTZ camera. The REVO ULTRA 4K 16CH NVR is powerful featuring H.265 Compression, up to 4K Recording and 4K video output. Bullet Cameras feature massive 4 MP Sensors, 2 times the resolution of standard 1080p. The built-in Professional Grade LEDs and IR anti reflection glass strongly illuminate the scene up to an unprecedented 100 ft. in total darkness. The RUCB36-1 Camera features a 4mm fixed lens that provides an 80 wide angle of view. The cameras are built for the outdoors capable of handling temperatures as hot as 140F and as cold as -40F. The PTZ camera with a wall mount features 1080p resolution, 22x Optical Zoom, 360 Pan Range and -15 to +90 Tilt Range and delivers incredible video quality with the added powerful ability to zoom in and out remotely, endless Pan Range and incredible Tilt Range. The camera comes equipped with 5th generation infrared technology. The IR arrays strongly and evenly illuminate the scene up to an unprecedented 500 feet in total darkness. The polished look and intuitive feel of the Ultra's interface is a joy for everyday use whether you're using the NVR itself, the Mobile App, Computer Software or Browser.Product Details