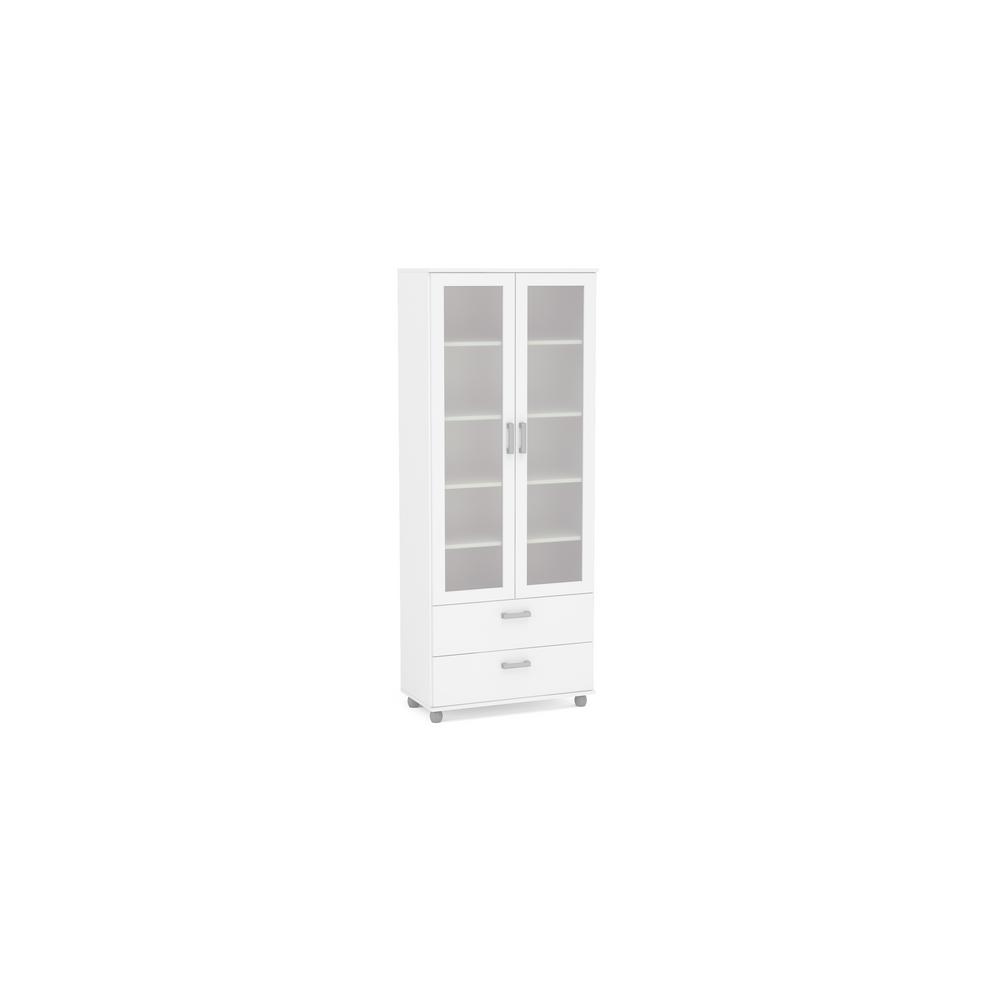 Organize your home with the Quebec Bookcase. This versatile shelf can meet any organizational need with 2-drawers, 2-glass doors and five internal shelves. The clean white finish and modern design works with any decor and provides much needed storage. Place it in the kitchen, living room, bedroom even the laundry room anywhere.

GOOD & GRACIOUS corner curio cabinet canGOOD & GRACIOUS corner curio cabinet can be used in the living room for displaying some of your favorite ornaments and possessions. Living room is a great place for a glass cabinet if you have a lot of space in the living room or feel like many of the items you want to display are better suited here. They are also very popular in shops and small stores, where items on sale can be displayed to the public.See Full Product Description

The Aster kitchen pantry is a design aboveThe Aster kitchen pantry is a design above the rest. This upright piece features elegant glass doors on pivoting hinges, perfect for showing off some of your favorite items. The magnetized glass is easy to open and close, and the sturdy frame is made of sturdy pressed wood. Standing on industrial hairpin steel legs, the handsome vertical shape will compliment any room.See Full Product Description

The Stubbe China Cabinet is your real lifeThe Stubbe China Cabinet is your real life dream. The Stubbe 2-Glass Door China Cabinet with 3-Drawers offers both storage space and display possibilities for your living room. Discrete compartments for that knick-knack of sentimental value, open compartments for those every-day necessities and drawers for quick clean-up when company arrives unexpectedly. Cutout handles are featured on small drawers, complimenting the large drawer and doors which feature a smooth leather handle. The Stubbe collection is made in easy-to-clean foil surface that requires the quick swipe of a soft rag to leave it shining again.See Full Product Description

Show off your souvenirs, sculptures, china,Show off your souvenirs, sculptures, china, photos and other classic pieces in timeless style, with this exquisite Lighted Corner Curio Cabinet. A top mounted light with mirrored back panels illuminates and reflects your displays. Two glass doors provide a secure and dust-free interior. This distinctive triangular shape allows for pieces to be viewed from any position in the room.See Full Product Description