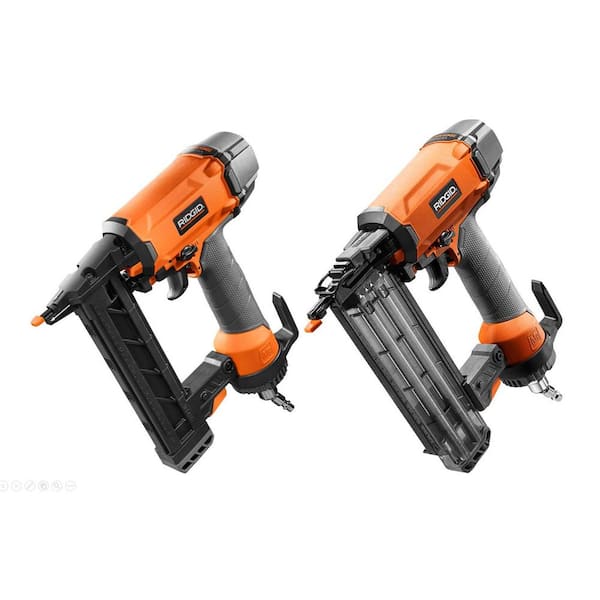 This tool was designed specifically for 18 gauge brad nails. The use of 16 gauge nails would likely jam the tool, I would not use any size but 18 gauge.

What’s the difference between the BNE and BNF models?

Hi KE. One is online only. That is the BNE. Thanks for asking. Greg

Does this nailer use staples as well?

Where is this 18-gauge nailer made?

The Ridge Tool Company is an American manufacturing company that makes and distributes hand tools under the Ridgid brand name. The company was founded in 1923 in North Ridgeville, Ohio. In 1943, it relocated to its current location in Elyria, Ohio

can i buy just thr bag seperatley for this gun?

No. I've found a LOT of the Ridgid bags at my local flea market.

Can you use staples in it

I belive you will need to purchase a staple shooter...I find nothing in the literature about staples.

Picture shows it has safety glasses. Doesn't say anything below. does it come with a pair?

Hi Dave, This model does come with the clear safety glasses and also the tool bag. Thanks for your interest. Greg

R213BNF - Has selectable fire rate or fire on contact versus trigger firing only.

16 people found this helpful
May 31, 2015
May Be The Best Brad Nailer for the Money
I broke the exhaust cap on the top of my old (~20 years) Porter Cable brad nailer (probably one of the times it fell of the bench) and it started spewing oily exhaust everywhere. The parts to fix it were over $50, so time to look for a NEW brad nailer. I wanted the following features: Oil-Less operation, easy depth adjustment, empty magazine trigger lock, rear exhaust, swivel air connection, and light weight and good ergonomics. You list may vary, but if you've used a brad nailer for a few years, our lists are probably similar. For example, the trigger lock may seem gimmicky, until you've punch a bunch of holes in a work-piece and you don't know which ones actually have brads in them. Or you've gotten a snoot-full of oily air exhaust a few too many times. The RIDGID hit all the items on the list, PLUS had a lifetime warranty for parts. They do make you jump through hoops on the internet to Register the tool for the Warranty, but it's probably worth it. All the plastic bits (like the brad magazine) are a little concerning, but we'll see how they hold up. If there's a problem, we'll test the Lifetime warranty. The "bump" feature is probably unnecessary on a brad nailer, unless you're doing production work; I WOULD like to have that feature on a staple gun for installing insulation, for example. I've only run a few dozen brads through the RIDGID (heck, I only bought it a few hours ago) and everything works as advertised. Unexpected things: it's MUCH quieter (rear exhaust?) than the PC, AND easier to handle in tight spaces. Really easy and fun to use right out of the box. Several of the Building Contractor discussion boards mentioned the RIDGID as the favorite brad nailer for tradesmen; previously, I hadn't even considered RIDGID at all, and I almost NEVER buy tools at Home Depot. Considering that the RIDGID hit every item on the feature list, AND was about HALF the cost of the Porter Cable (in constant dollars), this thing is a steal.
by hank
9 people found this helpful
Feb 4, 2015
Great tool for the price
Picked this tool up yesterday at the Christiana Home Depot based on reviews. Today we hung crown molding in a small bedroom, and I must say this nail gun exceeded my expectations. Light weight and ease of use really impressed me. Obviously this isn't the right tool for someone driving tons of nails a day, but for the average homeowner this is a steal.
by EmilioCigaro

2 people found this helpful
Apr 9, 2014
Rockin Doc
This tool is top shelf ! I used it on a project in my house that took 3 weeks to complete and the unit worked flawless . I read the reviews on it first and then made the purchase, The name Rigid speaks for itself when it comes to quality. I also bought their skillsaw and it too is a great tool with good balance.
by RockinDoc
2 people found this helpful
Showing 1-10 of 323 reviews

RIDGID introduces the 18-Volt Cordless Drill/DriverRIDGID introduces the 18-Volt Cordless Drill/Driver and Brad Nailer Combo Kit with (1) 2.0 Ah Battery and Charger. RIDGID HYPERDRIVE offers you all the power of a pneumatic nailer in a cordless tool. With no compressor, no hose, and no gas cartridge, this 18-gauge brad nailer enables faster set-up and easier maneuvering on the job site, driving 18-gauge nails from 5/8 in. to 2-1/8 in. in length. The Compact 1/2 in. Drill/Driver has a 4-pole open frame for superior power and 535 in./lbs. of torque to tackle your most demanding applications. Loaded with features for ease-of-use and more versatility, including Grip Light Technology which engages an LED light by simply holding the tool and an innovative Hex Grip enhanced micro-texture for a secure grip and maximum comfort, this tool is durably made for long-lasting and reliable use. Backed by the Industry Leading Lifetime Service Agreement, the 18-Volt Cordless Drill/Driver and Brad Nailer Combo Kit includes a 2.0 Ah Battery, an 18-Volt Charger, sample nails, two belt clips, and operator's manuals.See Full Product Description