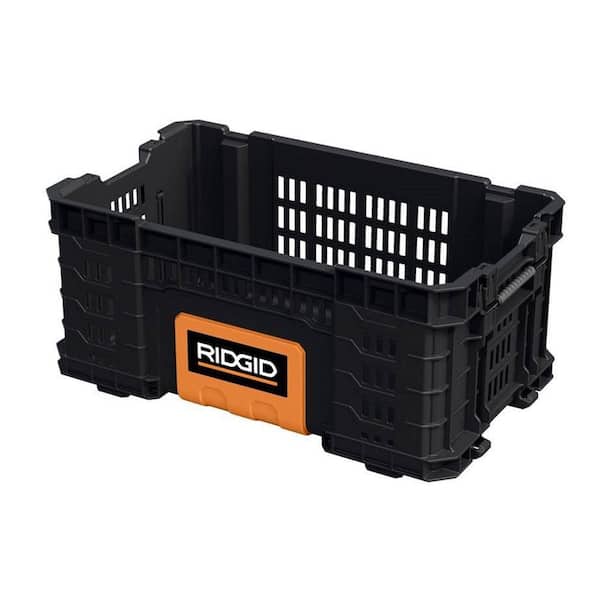 This RIDGID Pro box is made with a durable high impact resin and made to last. The Pro Box makes for easy to transport of loose job site items. This Pro box works with the RIDGID Pro Tool Storage System.

An excellent choice for a professional orAn excellent choice for a professional or a weekend warrior, the Husky Connect toolbox provides great functionality in a compact design. The spacious toolbox can be used to store larger and medium size tools and accessories, while the removable tray is ideal for keeping small parts. This toolbox provides easy access to the top level while keeping your tools safe and secure. Portable thanks to the central handle makes hauling the toolbox a breeze. This unit is compatible with the Husky Connect organizer, providing extra storage and organizing space.View Full Product Description

This RIDGID Pro Gear Organizer is made withThis RIDGID Pro Gear Organizer is made with durable, high-impact resin for long lasting performance. It's equipped with heavy-duty metal latches and features an integrated water seal to protect against water and dust intrusion. The organizer includes 10 removable bins with dividers which provide up to 14-compartments to store your small parts. This organizer works with the RIDGID Pro Tool Storage System for a complete, professional look.View Full Product Description

This 22 in. Connect Cantilever OrganizerThis 22 in. Connect Cantilever Organizer features a convenient cantilever mechanism that gives you full access to your parts. The upper body contains 12 removable small-part bins and the lower body has 10 deep removable bins. The full-body steel handle makes it easy to carry heavy loads. This organizer is compatible the Husky Connect Rolling System, and the Husky 15 Gallon Connect Mobile cart. It can be connected to the top of the Husky Connect Rolling System.View Full Product Description

The Milwaukee PACKOUT Crate is part of theThe Milwaukee PACKOUT Crate is part of the industry's most versatile and most durable modular storage system. The tool crate is constructed with impact resistant polymers for ultimate durability in harsh jobsite conditions and provides up to 50 lbs. of weight capacity. The crate tool box can be stacked seamlessly with all Milwaukee PACKOUT products and includes rear hanging points so it can be hung from a wall-mounted PACKOUT Mounting Plate. The PACKOUT modular storage system allows users to customize and build their own storage system to easily transport and organize tools and accessories.View Full Product Description