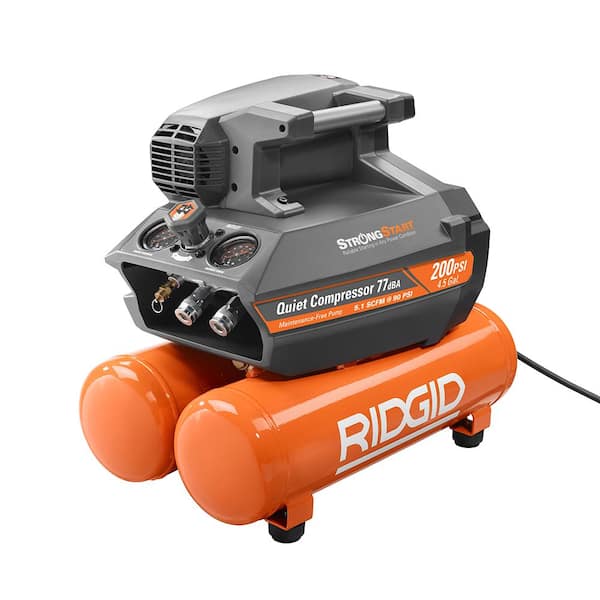 RIDGID introduces the 4.5 Gal. Portable Electric Quiet Compressor. Coming in at 77 db, this unit is up to 75% quieter than leading competitor units, making it awesome for jobsites and keeping the crew working all day. STRONGStart Technology allows this unit to reliably start in any power condition. This unit is also up to 61% more compact than leading competitor units allowing for easier transport and storage, without sacrificing any power, all while having a powerful 200 PSI. All of this is backed by the RIDGID 3-Year Limited Warranty. This compressor includes a power cord and an operator's manual.

This California Air Tools 10-gallon electricThis California Air Tools 10-gallon electric air compressor delivers reliable power and air flow with less maintenance and noise. Operating at an ultra-quiet 70 dBA, the powerful 2.0 HP (SP-9421) motor produces 1680 RPM creating less noise and less wear. It is designed to increase duty cycle and allow for longer, continuous run times. Enabling a variety of use in varying temperatures and uneven terrains, the machine's oil-free dual piston pump system is engineered for high performance and durability. The oil-free function extends the compressor's life cycle to more than 3,000 hours before wear compared to comparable compressor's 100 hours or fewer. You can start this compressor using fewer starting amps with the easy-start valve, which also releases a small amount of air from the pump to produce a no-load condition that allows the motor to spin freely. The included wheel kit permits easy movement around your jobsite, shop or garage.See Full Product Description