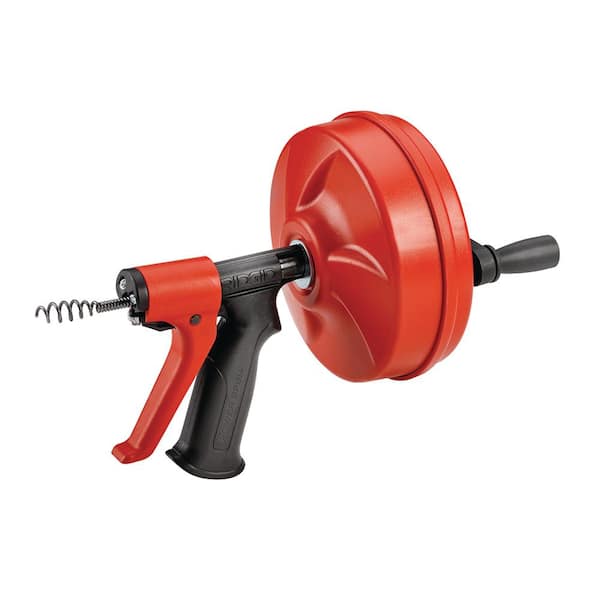 The RIDGID PowerSpin+ features a 1/4 in. x 24 ft. usable kink-resistant MAXCORE cable. It can be used manually or with a variable speed drill (not included) that chews through grease, lint and hair to unclog sinks, tubs and showers. Integrated within the tool is a patented AUTOFEED trigger.

165
Filter by:
Showing 1-10 of 1,234 reviews
Jul 14, 2021
Waste of money doesn't hold up
I think the picture speaks for itself! It broke the 2nd time I used it! I purchased it for 2 reasons, I tried using manual snake, it wS too far down pipes to break it up and I didn't want to spend 400.00 to call a service. The first time I used it, I got drain to flow, somewhat. However, it wouldn't retract into wheel housing. I manually fed it bk. I waited a couple of weeks to use it again. It did work, but it took over three hours. Most of my time was spending uncoiling it, getting most of it bk into housing, while trying to hold the seam together. It was a nightmare I have no idea if this happened bc of where the blockage was. It was at least 20 feet down drain. I wouldn't recommend this to anyone, except those who are determined to do it The only reason I gave it my ratings is bc it saved me money having to call plumber. Last time 15 minutes cost 350.00! If you have the time and patience, like I did, then buy it. If you need it done ASAP, skip this thing!
by
Jun 9, 2021
This a good tool but the problem I had with this tool is the casing broke when I was retracting t...
This a good tool but the problem I had with this tool is the casing broke when I was retracting the cable from the drain after using it only four or five times. P.S. This is the second time I had to replace the item.
by
2 people found this helpful
May 24, 2021
For DIY with a lot of Patience
Bought it today to see what's going on with my toilet drain that won't unclog. I removed the toilet. Cranking it clockwise was v e r y slow. The hand holding the pistol grip because tired so l took short breaks. All 25' in. Just a little piece of toilet paper came out. I would not use a drill unless it is a variable speed drill set at low. Instead of cranking it back in, l did it by hand pushing the snake back in slowly. Cons: make handle grip a tad bit smaller for us females. Thanks/will update
by
3 people found this helpful
Dec 31, 2020
Well worth the money.
Turns out my main line somewhere past the last waste source line was clogged. NOTHING was draining I ran the cable down my washer drain line and got some gunk but ran out of cable (yes 35 or 50 feet of cable would be better). BTW, you really can't tell as you're using it when the cable is fully extended - so I extended it all the way and applied some white spray paint about four inches from where it connects to the main drum. Although it said don't use it on larger diameter lines I did anyway from an inspection port next to the house and pulled some small roots from the main line to the street. Bottom line: six bottles of Draino Max Gel (use for standing water) left overnight and flushed with hot water, along with my drill connected to the PowerSpin cost me $77, I turned on every water supply and flushed 2 toilets and it flows nicely - and I saved a bunch of money. Tips: you don't need to squeeze the trigger REALLY hard like a few reviewers said. Set your drill on low speed and if you have torque settings, start low then increase enough to spin and feed the cable. Mark (spray paint) the cable at say, 4, 8, 12,16, then 20 feet so you can count how many feet have been inserted. Read the manual, watch a few YouTube videos and this will work fine for small jobs.
by
11 people found this helpful
Dec 18, 2020
The way it works in the concepts is great! But the little piece used to attach your drill on the ...
The way it works in the concepts is great! But the little piece used to attach your drill on the back there’s nowhere as sturdy as it needs to be to support the power of a drill. After my third time using it it’s snapped off.
by
7 people found this helpful
Aug 16, 2020
Does the JOB..
I purchased this Ridgid tool to clear a kitchen drain. The clog was just beyond the elbow well under the floor. I was able to use this from the roof vent down past the elbow to clear the drain. I used this along with a cordless drill and it worked well. Slow the speed down at the elbows and at clogs.
by
8 people found this helpful
Jun 11, 2020
Ridgid Strong ITS GREAT
I just bought this and know for 50 years all ridgid products are Great. I live in Thailand and trying to find a good drain snake is impossible, however there is Ridgid so my problem is solved.
by

Designed for most sink, shower and tub drains,Designed for most sink, shower and tub drains, and the Husky 1/4 in. x 25 ft. Power Drum Auger can be operated manually or with an attached drill (not included). It features a center-balanced pistol grip that helps improve control and offers a comfortable operation. The auger's quick-release cable lock provides fast, simple and secure cable adjustments. Great for clearing stubborn clogs.See Full Product Description

RYOBI introduces the 18V ONE+ Drain AugerRYOBI introduces the 18V ONE+ Drain Auger (Tool Only). The cordless 18V ONE+ Drain Auger offers superior performance to rid your sink or tub of slow draining. Powered by any 18V ONE+ Battery, now users can easily clear clogged drains with pipes up to 2 in. wide with the reinforced cable and powerful motor. The lock-on auto-feed allows you to drive the 25 ft. long cable to the clog and break it up, allowing water to flow again. Best of all, it is part of the RYOBI ONE+ System of over 225 Cordless Tools that all work on the same battery platform. Backed by the RYOBI 3-Year Manufacturer's Warranty, the ONE+ Drain Auger includes an operator's manual. Battery and charger sold separately.See Full Product Description

The RIDGID K-6P toilet auger is a high-qualityThe RIDGID K-6P toilet auger is a high-quality tool designed to provide safe and easy cleaning of toilet obstructions. The bulb-head auger features a compression-wrapped inner cable. The handle is detachable to allow the option of adding a drill(not included) to power through your toughest jobs. The quick lock adjustment extends the cable to 6 ft. to clear obstructions beyond the toilet.See Full Product Description