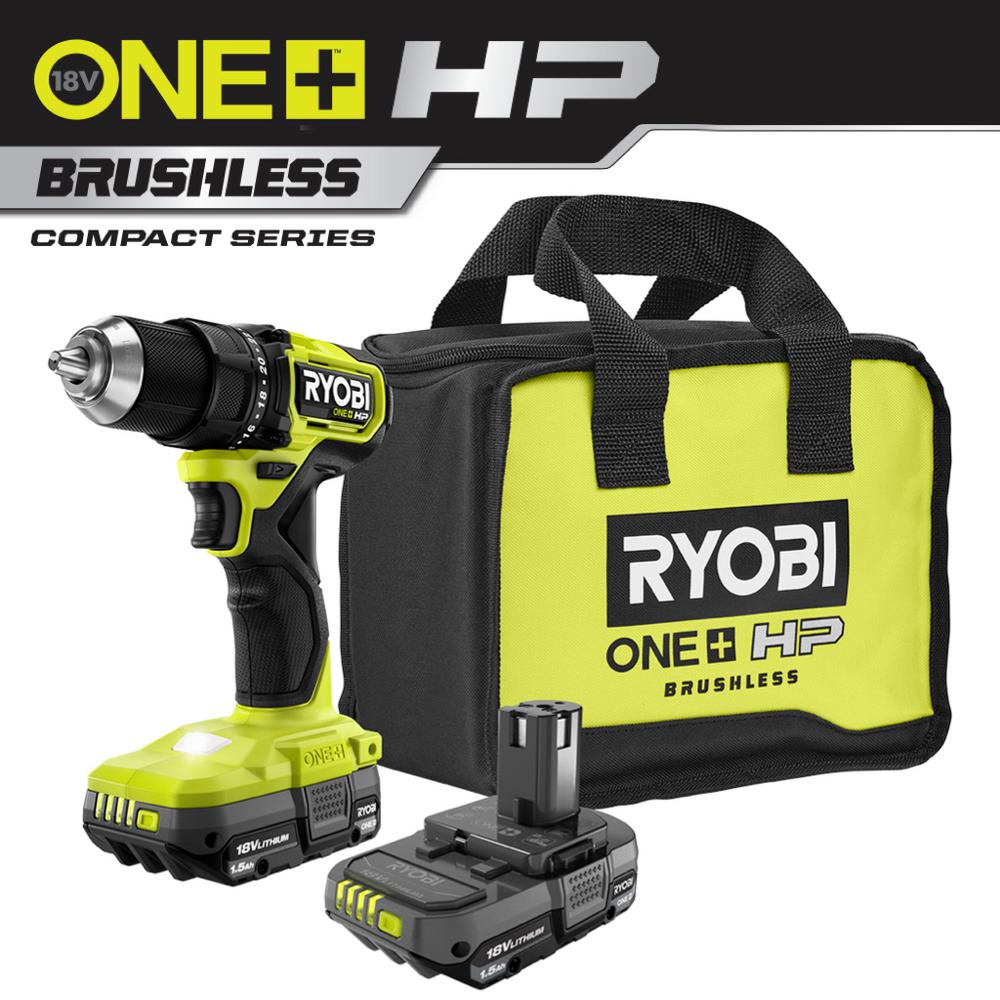 RYOBI introduces the ONE+ HP 18V Compact Brushless 1/2 in. Drill/Driver Kit with (2) 1.5 Ah Lithium-Ion Batteries, Charger, and Bag. Heavy duty yet lightweight-that's the beauty of the RYOBI ONE+ HP 18V Compact Brushless 1/2 in. Drill/Driver Kit. Measuring at only 6.4 in. in length, this tool is 30% more compact and 20% lighter weight than the brushed model, giving you better access to tight workspaces and overhead applications. It's also equipped with a brushless motor that delivers up to 400 in./lbs. of torque for maximum power when drilling and driving through tough materials. Other special features include a two-speed gearbox (0-450 and 0-1,700 RPM) and a 24-position clutch for maximum control while drilling and driving. The 1/2 in. single sleeve ratcheting chuck is custom designed with a unique knurling pattern to provide a durable grip for quick bit changes. Best of all, it is part of the RYOBI ONE+ System of over 225 cordless tools that all work on the same battery platform. Backed by the RYOBI 3-Year Manufacturer's Warranty, this ONE+ HP 18V Compact Brushless 1/2 in. Drill/Driver Kit includes (2) 1.5 Ah Lithium-Ion batteries, charger, tool bag, and operator's manuals.

With 66 hand tools and accessories includingWith 66 hand tools and accessories including screwdrivers, wrenches, drill bits and more, the BLACK+DECKER 20-Volt Max Lithium Drill and Project Kit is ideal for a variety of jobs around the home. The drill's 11-position clutch offers versatility and control, helping prevent stripping or overdriving screws. Powered by lithium-ion battery technology, the kit includes an always-ready battery that holds a charge up to 18 months, so you can get right to work whenever you need.See Full Product Description

RYOBI introduces the 18V Cordless ONE+ 1/2RYOBI introduces the 18V Cordless ONE+ 1/2 in. Drill/Driver Kit w/(1) 1.5 Ah Battery and Charger and Impact Rated Driving Kit (40-Piece). The drill/driver features a 1/2 in. keyless chuck with a 24-position clutch and 2- speed gear box that adjusts the torque output to control the depth of the screw or fastener. This kit is powered a lithium-ion battery that holds a charge up to 4X longer, offers up to 20% more run time and is 45% lighter weight than Ni-Cd batteries. Backed by the RYOBI 3-Year Manufacturer's Warranty, the 18V ONE+ Drill/Driver Kit includes an 18V ONE+ 1.5 Ah Compact Lithium-Ion Battery, an 18V ONE+ Charger, a double ended bit, and an operator's manual. RYOBI Impact Rated Driving Bits are built to withstand the tough demand that comes with the use of an impact driver. The 2 in. bits feature a TORSION ZONE that is engineered to absorb the high torque and demand that comes with the use of an impact driver. This 40-piece kit offers a variety of the most commonly used 1 in. and 2 in. bits, along with specialty socket adaptors, nut drivers and magnetic screw guide. The included case is compact and modular, meaning the bit holders can be removed or rearranged. This allows for complete customization of accessory kits. This kit includes 40 pieces in an assortment of bits, nut drivers, socket adaptors, and a magnetic bit holder.See Full Product Description

The DEWALT DCD771C2 20V MAX* Cordless Drill/DriverThe DEWALT DCD771C2 20V MAX* Cordless Drill/Driver Kit is designed with a high-performance motor that delivers 300 unit Watt out (UWO) of power. The compact, lightweight design allows you to work in tight spaces for long periods. This battery-powered drill/driver features a high-speed transmission with 2 speeds (0-450 RPM & 1,500 RPM) for a range of drilling and fastening applications. It also has a 1/2 in. single-sleeve ratcheting chuck for tight bit-gripping strength. Backed by a DEWALT 3-year limited warranty, the DCD771C2 Cordless Drill/Driver comes with two Lithium Ion batteries, a charger, and a sturdy carrying case.See Full Product Description