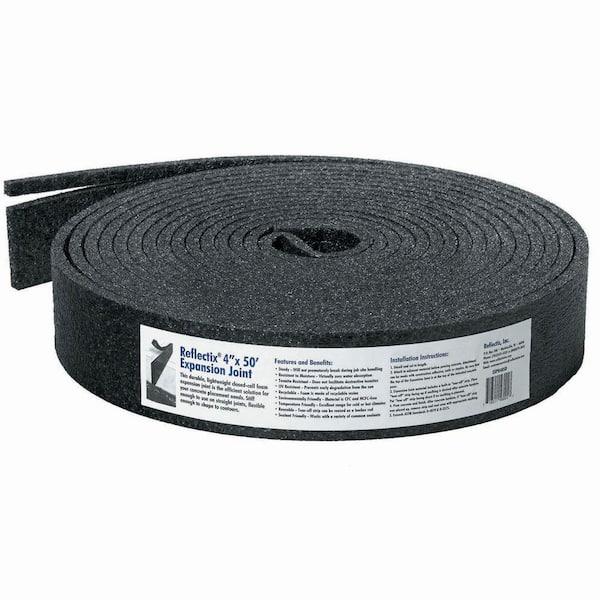 The Reflectix closed cell foam expansion joint is the solution to your concrete placement needs. It is durable, lightweight and flexible enough to shape to contours. The product includes a 0.5 in. x 0.5 in. tear-off strip for applications where caulking is specified.

Manufacturer Warranty
Reflectix warrants its products to be free from material and workmanship defects.

How will this perform against salt from splash water from a saltwater pool?

I would not recommend Reflectix in this application.

What colors does it come in?

Black but you should seal it with joint filler which comes in other colors.

I concreting 12x5 ft porch. What would I use, if anything, between brick wall (on 3 sides) when I pour the concrete?

I used this for an interior slab and it worked great. I like that you can tear off the top 1/2” afterward and caulk the joint

Does it come in white?

We do not currently have this product in a white.

I have 2 inch wide existing expansion joints. I'm planning to fill with sand and then cut this st...

Yes it will work as a filler.

Can this be used as backer rod for pool expansion joint?

Our product would not work in this application.

How do you install this joint between slabs that are already in place?

Will epoxy adhere to this?

Yes but joint space should be too wide. Expansion joint expands out of space if too wide. I double expansion joint material in few spots and used joint filler compound to hold in place

When you use this material as a replacement for old deteriorated concrete expansion joints in you...

Yes, you can use the joint strips to fix the indoor garage wall or floor. Cut it to fit in the gaps.

can this be used on a pool deck?

yes it is an exellent product to use for expansion joints

6
Filter by:
Showing 1-10 of 122 reviews
May 30, 2017
Fantastic product, saves time at end of job, no trimming of expansion!!!
Fantastic product, saves time at end of job, no trimming of expansion!!!
by Reilly
4 people found this helpful
Sep 8, 2016
Seems to be working as a joint material
About 10 years ago, I decided to pour concrete slabs beneath my canales. So the water that runs off the roof falls on a concrete slab. 10 years ago I used the asphaltic fibrous joint material between the concrete and the house. Most of it has deteriorated to the point that there is nothing left. I had several other canales that I never put a slab under, but decided to do that this summer and I also decided to build a sidewalk along a portion of the house, so I bought the foam to try out. See attached pictures of the foam joint material, which seems to work ok. You need to glue it to the surface, in my case the house,to keep it in place where as with the aliphatic fibrous material, it was much stiffer and did not have to be glued as much. The aliphatic material could get by with only 3 or 4 spot glues just to keep it from falling down while pouring the concrete. If you are going to screed off the foam material it needs to be continuously glued near the top so it doesn’t push down while using it as a screeding surface. One of the pros to the foam is it will easily go around a rounded corner. Again see picture. I also found that it is better to put a bead of caulking or glue material all along the top of the foam to keep concrete and aggregate from getting behind it, since it is so much more flexible than the other joint material. Con: The need for gluing and calking requires additional time to allow the glue and calking to dry good before doing the concrete work. 5-10 years from now, I will know if this new foam joint material holds up better or worse than the aliphatic fibrous material which I put many, many tubes of chalking on over the years to try and keep anything from getting between the concrete slab and the house, but ultimately the dirt, grass, weeds, moisture, snow and ice won that battle, due to the deterioration of that joint material. Hopefully this material will hold up better over time.
by juan

Trim-A-Slab is a product made from exterior-gradeTrim-A-Slab is a product made from exterior-grade materials designed to replace rotten or missing wood often found in driveways and sidewalks over 5-years old. It offers many advantages over the tube-dispensed gooey stuff that has been about the only option available for years. Trim-A-Slab installs incredibly fast, looks great and can be removed and replaced in case you need to run wires for outdoor lighting across your driveway.See Full Product Description

Trim-A-Slab is a product made from exterior-gradeTrim-A-Slab is a product made from exterior-grade materials designed to replace rotten or missing wood often found in driveways and sidewalks over 5-years old. It offers many advantages over the tube-dispensed gooey stuff that has been about the only option available for years. Trim-A-Slab installs incredibly fast, looks great and can be removed and replaced in case you need to run wires for outdoor lighting across your driveway.See Full Product Description