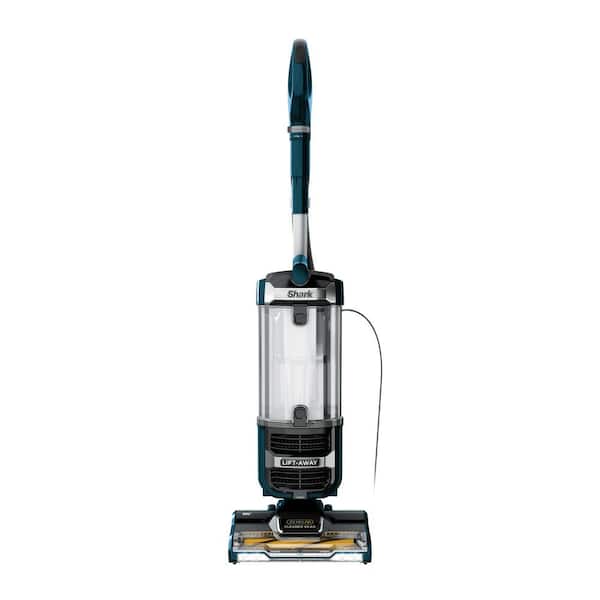 This Shark Rotator Lift-Away upright vacuum delivers powerful deep cleaning and features the self-cleaning brushroll, which removes long hair and pet hair-no more hair wrap. Lift-Away technology lets you take your cleaning above the floor with a variety of cleaning tools to vacuum furniture, stairs, and other hard-to-reach spaces. Anti-Allergen Complete Seal Technology traps dust and debris inside the vacuum, keeping it out of the air that you breathe. The pet power brush deep-cleans embedded debris from upholstery and other surfaces and the 12 in. crevice tool allows you to reach tight spaces with ease. This vacuum cleaner also features 2XL dust cup capacity for whole-home cleaning and LED headlights to illuminate darker areas while cleaning.

7
Filter by:
Showing 1-10 of 193 reviews
Dec 2, 2021
Beyond Amazed!
I just got this vacuum today. I put my Shark together and vacuumed my apartment. I was shocked at what came out after already vacuuming it with my old vacuum. I have allergies and asthma. This is life changing. Thank you!
by
Nov 28, 2021
Big letdown for a Shark product. Bad design
The worst vacuum shark makes. Lowest sucking power & the roller is not a brush roller like you normally would think so it does not grab the carpet or remove the dirt and debris as well. I went over the same area with an upright shark & got as much dirt.
by
May 1, 2021
Great vacuum!
I bought this unit @ 6 months ago and like it very much. Although there are issues others have mentioned, mostly in regard to the lift-away feature being difficult to use, I did have some issues as well, but were mostly of my own making. Others have mentioned that they had issues with the bar/brush holding hair, but I have had no such issues. I also have 2 very large German Shepherds that come and go as they please and shed like nothing else and have yet to learn to wipe their feet. After emptying the container, it looked like there was a dead animal laying there...there was so much hair. The only real issue I have had is with the filters. The advice that they should be cleaned every 3 months might be good for someone living in a sanitary environment, but not for people living in the country where there is lots of dust. I HAVE to clean mine after every use, as they are full of dust. Cleaning is no problem though, just rinse til clean, roll up tightly in an old towel and they are nearly dry. My issue began when it started shooting dust in copious amounts out the front...even after cleaning the pre-filters. When I realized that the relief valve was opening to allow that,. I looked at the HEPA, which they recommend cleaning once a year. It was completely clogged with dust. After cleaning HEPA filter, I once again had like-new performance...and no more dust clouds. I do like the lift away, but it has to be carried around as the short coil hose simply pulls it over. I prefer to just leave it on the unit, as it is more stable, but will still fall over, due to the short length of hose. However, it is great for vacuuming the car. It is powerful, deep cleaning and have had no issues with it per se. The continual cleaning of the filters is annoying, but not overly when compared to the pluses, it beats installing a new bag. As well, the way this thing turns and handles is very good and makes using it much easier. All in all, I love this thing.
by

Customer review from sharkninja.com
Apr 10, 2020
Unbelievable
The first picture is what was swept up. Full of dog hair. The second picture was taken right after sweeping and taking the first picture. AMAZING!,,
by

Customer review from sharkninja.com
Feb 10, 2020
Best Vacuum Ever
This vacuum is amazing and lightweight and easy to assemble and I have 2 dogs so this vacuum is a must
by

Customer review from sharkninja.com
Dec 21, 2019
Brushroll OK
I was really excited about the self cleaning brushroll, but it did not work as well as imagined. I still had to cut a lot of hair out. My other Shark (Navigator I think) seems to have more suction. I do like the life away feature; makes it easy to clean along walls and in corners, ceiling corners too.
by

Customer review from sharkninja.com
Dec 20, 2019
Great so far!
I bought this during a sale because I had been using my mother in-laws Shark Vacuum and fell in love with how well it worked for the wood flooring and carpet! I have only used mine a few times, but I love it. It does great keeping up with the cat hair and litter!
by

Customer review from sharkninja.com
Aug 17, 2019
Shark Rotator Upright Vac lift away.
I bought the SharkVac model ZU572WBKT 8/15/2019,I received the package right now easy to assemble in 10 mins.its true left away the pet hair and other harmful debris hiding in the carpet and here the JACKPOT 99% anti allergen complete seal..this the first time I bought shark Vac very..very reliable I hope it will last more than 5yrs..
by

Customer review from sharkninja.com
Aug 6, 2019
Excellent vacuum cleaner
[This review was collected as part of a promotion.] This vacuum cleaner is amazing. The first time I used it I was in shock to see how much dirt it was inside with only passing it on the living room. Is very powerful and deep cleaning. I love the XL container and all the tools. Makes my life easier and loving cleaning all the floors. Also I don't have pets but I loss a lot of hair and always hate when the hair get stuck on the roller. With this vacuum I don't see any hair wrap around the roller. Has an anti-allergen complete seal technology captures and holds over 99.9% of dust and allergens inside and that's amazing. Love the LED headlights to see better, this helps me a lot because I'm a little blind, Haha! All the tools are great to reach high spots, clean stairs, curtains, couches etc. I'm in love with this vacuum.
by

Customer review from sharkninja.com
Aug 5, 2019
Lightweight with Power
[This review was collected as part of a promotion.] I really like this vacuum. I'm surprised by how much dust it picks up, especially from my upholstered furniture. It also has a pet hair attachment which I did not try. It seems to have more power than my other upright. It feels lightweight (about 25 lbs.) and glides easily. It swivels and has headlights. It's not very loud either.
by

The next-generation Shark Navigator Lift-AwayThe next-generation Shark Navigator Lift-Away (ZU561) lightweight upright vacuum includes the self-cleaning brushroll to deliver nonstop hair removal. Its lightweight design and Lift-Away technology make it easy to clean stairs, furniture, and other above-floor areas. Anti-Allergen Complete Seal Technology keeps dust and allergens inside the vacuum cleaner and out of the air that you breathe. Swivel Steering provides effortless maneuverability on both floors and carpets, allowing for seamless debris pickup in hard-to-reach areas and a suction control slider lets you easily customize the amount of suction needed for hard floors or carpets.See Full Product Description

This Shark Lift-Away (ZU701) upright vacuumThis Shark Lift-Away (ZU701) upright vacuum features a self-cleaning brushroll for powerful pet hair pickup with no hair wrap. The Lift-Away feature allows you to detach the pod to clean furniture and above the floor. This vacuum is also equipped with powerful LED headlights and Anti-Allergen Complete Seal Technology with a HEPA filter to trap dust and allergens.See Full Product Description

The Shark Rotator Professional Lift-AwayThe Shark Rotator Professional Lift-Away features two vacuums in one. This powerful upright is also a portable Lift-Away that makes vacuuming quick and easy on both carpets and bare floors. You'll find this vacuum completely versatile. It's armed with swivel steering to maneuver around furniture, features a power nozzle with LED headlights, and includes a brush roll on/off to provide superior performance. The Rotator also features Anti-Allergen Complete Seal Technology + HEPA filtration to trap 99.9%* of dust and allergens inside the vacuum. Combined with two foam filters, this dust containment system helps keep allergy-causing agents from releasing back into the air. Additional accessories include a pet power brush, crevice tool, straight suction nozzle and a wide pet upholstery tool. An extra-long 30 foot long power cord allows you to clean larges spaces easily. It is even exceptionally quiet, so you won't disrupt your household either! Based on ASTM F1977 of particles between 0.3 and 0.5 microns.See Full Product Description

Shark's original, full-sized 2-in-1 PoweredShark's original, full-sized 2-in-1 Powered Lift-Away upright vacuum with detachable canister for portable cleaning. With the touch of a button, Powered Lift-Away technology allows you to lift the pod away and deep clean hard-to-reach areas while still delivering power to keep the brushroll spinning. Equipped with Advanced Swivel Steering and powerful LED lights on the hand vac and nozzle, this vacuum has a completely sealed system with a HEPA filter to trap dust and allergens. The Fingertip Controls allow for easy powering on/off and quick transition between hard floor and carpet mode while the Pet Multi-Tool enables you to get pet hair off any surface.See Full Product Description