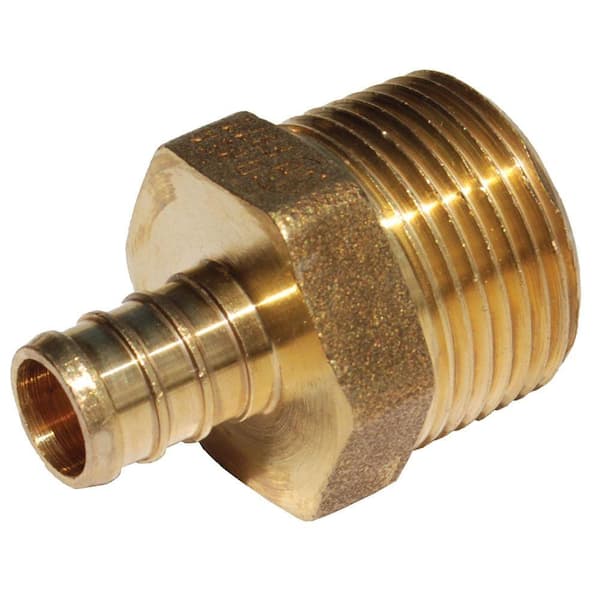 Manufacturer Warranty
For warranty information on this product, please call our Internet Customer Service Center at 1-877-700-4242

7
Filter by:
Showing 1-10 of 47 reviews
Nov 9, 2018
These Pex fittings manufactured under the SharkBite name are used to transition from conventional ½’ rigid copper line to Pex. This particular size (½x ½”) female sweat are fitted over the ½” line then soldered in place. Pex tubing is then slid over the barb and either crimped in place with a copper pex crimp ring or a pex clamp. By following standard sweat guidelines and methods, these fittings solder well. Clean material and flux prove they accept solder properly and show over 98% solder penetration throughout the full joint.
by
2 people found this helpful
Nov 24, 2015
Plumbing is easier than you thought
See the attached picture. That is a replacement manifold for a radiant heating system. The old manifold was leaky and the system was partly blocked, with no effective way to flush it since all the valves were frozen. When I inquired with the plumber who knows all these houses ( Levitt neighborhood, hundreds of houses all fitted-out the same weird way ) he would not even return my call! That's how much he didn't want the job. So I decided to bite the bullet and teach myself plumbing. Turns out there are lots of great instructional videos on sweating pipe joints on the YouTubes. I watched a few, and made a some test joints on the workbench, and it was simple. Then I went in the rather cramped linen closet and cut out the old manifold, which you can see on the floor at the right. Onto each cut end I sweated a barbed PEX adapter - six in all. The new manifold is both bigger and opposite-hand or mirror-image of the old one. That meant either installing it backwards, or getting clever. Installing it backwards was a bad option - you'd have to reach around the back to adjust the valves, and when it is running it is hot. So I sat down and started sketching things out, and this is the final result. The whole thing is folded-up so tight that it fit into the original space, and when I was done I simply replaced the shelf above. This installation has 6 adapters, 9 elbows, one tee, one valve, and the manifold itself. There are 16 pieces of PEX tubing of different lengths and sizes, with two joints each, for a total of 32 crimped connections. To do all of this the old-fashioned way in copper and solder would have been a real pain. But with Pex tubing, barbed elbows, and crimp rings, it was easy. Well, as easy as it could be, it still took several hours. But I would much rather be crouched in that small space with the PEX crimper than a torch. My first thought was to bend the tubing, but it is not that flexible, so I resorted to the elbows to keep the installation compact. When I turned the water back on, not one joint leaked, nor has one ever leaked in several years since I built it. The manifold works perfectly, and you wouldn't believe the gunk I flushed out of the system, one loop at a time now that I had working valves. The entire heating system works noticeably better now; rooms that once got no heat are now toasty, and rooms that got to much heat can be throttled-back. This is an example of what you can do YOURSELF with minimal pipe sweating and PEX. Needless to say, I have not called the plumber since. This is the worst job I could imagine doing, and I pulled it off perfectly. Everything since then has been easy by comparison. The one downside of PEX is the startup cost of the tools and materials - a good crimper is not cheap. But once you have it, and a small torch to install the adapters if needed, you can do pretty much anything, including things your plumber wanted nothing to do with !!! These brass adapters are ... brass adapters. They are exactly what they should be, nicely finished with no manufacturing flaws, ready to use.
by
3 people found this helpful
Jul 28, 2021
Rating provided by a verified purchaser...
Rating provided by a verified purchaser
by
Apr 23, 2021
Rating provided by a verified purchaser...
Rating provided by a verified purchaser
by
Apr 22, 2021
Rating provided by a verified purchaser...
Rating provided by a verified purchaser
by
Mar 18, 2021
by
Mar 13, 2021
Downside to online purchasing
One of the downsides to curb side pickup is getting something you think will work and then finding out after installation it is the wrong part - ordering and pickup were fine otherwise
by