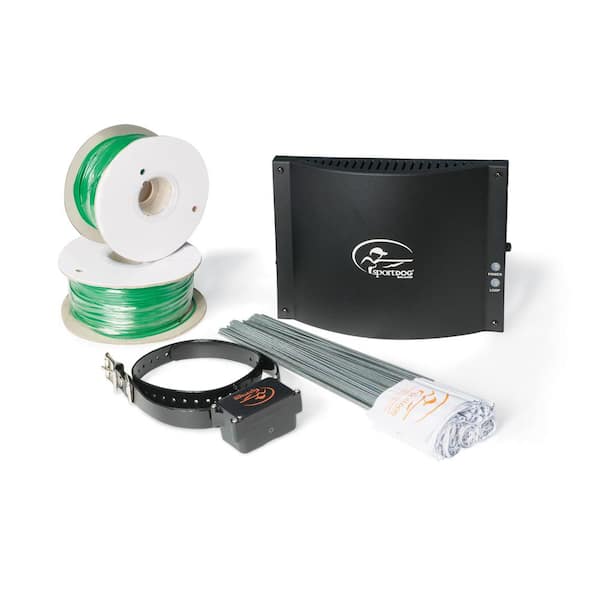 The SportDOG Brand In-Ground Fence System is a simple and cost-effective alternative to a traditional fence. Safe and effective for all dogs over 10 lbs. the SportDOG Brand in-ground fence system's transmitter is powerful enough to cover up to 100 acres of land. Installation is as simple as burying the wire around the perimeter of your yard and plugging in the transmitter. Your dog wears a correction collar that receives a signal from the wire and warns him if he ventures too close to the perimeter. The waterproof collar receiver allows for four adjustable levels of correction plus tone and vibration mode. The system is expandable to include any number of dogs with the purchase of additional collar receivers. Follow the training instructions included with your SportDOG Brand in-ground fence system to get your dog acquainted with his new boundaries and he will be staying safely in your yard in no time.

2
Filter by:
Showing 1-10 of 60 reviews
Jul 27, 2020
Freedom for us and our Nellie!
It's over two years now since we installed SportDog 100A on our rural property, and we couldn't be happier. She was a rescue from Greece, 9 months old, had lived her life in a concrete floored run with wire fencing and a corrugated roof. She had never been mistreated, but had also never had a toy, had never run free, and had very little socialization. We got her in winter, and spent the early months just bonding. When spring came and the ground melted we were so eager to let her off leash. It was clear she was built to run, with her slim waist and barrel chest. But we live in the country, with a 300' driveway that ends a highway. Behind us farm fields and a whole lot of nothing. As well as her hound build, she had a hound nose. We couldn't just trust she would stay with us, as had our previous lab cross dogs. Twice she followed her nose and we lost her in the fields. It was scary. We didn't know if we'd be able to keep her. There was no way we would tie a dog up, but our property was way too big for a fenced yard. We wanted her to be able to be with us wherever we were. The fence solved every problem. She is smart and sensitive. One little shock was all she ever needed. We keep it on the lowest setting for the fence and for the collar. She knows that when it comes off she can walk across the invisible line on the tractor path. But only there. She won't cross anywhere else, even if we sometimes don't put it on her. The cat knows exactly where he can sit, just out of reach when she chases him (for fun). The squirrels even seem to know where they can go! She isn't bothered at all by the collar. Sleeps inside or out with it on. The only time it has not worked is when the temperature went below -25 F. Soon as it crept up a few degrees it started working again. Works out fine because it seems the temperature where it stops working is exactly the temperature where she doesn't want to go out!:-) She has over two acres to run in, and we couldn't be happier, as you will see from the pictures. Only one suggestion for the manufacturer. The wire that came with the kit was green, while the extra wire we bought was yellow. The yellow is much easier to see while installing and in case you ever need to move it or make a repair (like when your husband breaks it with the tractor blade....) Thank you, SportDog.
by

Customer review from sportdog.com
Jul 27, 2020
Product arrived quickly and works great.
Everything worked as it should, I would recommend renting a plow if you don’t have access to one. With the plow total installation with 1000’ of wire was about an hour. Without it not sure how long it would have taken
by

Customer review from sportdog.com
May 27, 2020
Easy set up ! Fence works great!
We have an 18 month old Amstaff, who we just adopted two weeks ago. The fence works great for her, she responds well to it. We loved how easy of a set up the fence was! Great product!
by

Customer review from sportdog.com
Dec 2, 2019
We have our dogs back!
We previously used the 425 training collars on our dogs and found them to be very effective, as long as you notice your dogs are wandering BEFORE they get out of range. We never had an issue until we moved out into the country where there were a lot of trees and fun things for our dogs to sniff. Our two are highly hunt/scent motivated and are fast as heck, so they would get out of hearing range VERY quickly. We bought this electric fence system, plus an extra 1,500 ft of wire and laid it on top of the ground (I know you're not supposed to but this is a rental property for us) and we buried it anywhere it would be exposed to getting run over (driveway, fence crossings). It only took our dogs a week to be totally trained on the fence and they've never run through it, even while chasing a deer. They both hit the warning and came bolting back to the house. I cannot say enough amazing things about this product.
by
Response from Customer CareDec 2, 2019
Thank you for your review. It's great to hear that the In-Ground Fence™ has been such a great training system for you and your dogs! We appreciate you taking the time to share your experience and thank you for your feedback!

Customer review from sportdog.com
Nov 10, 2019
Easy to install
I never installed a in-ground fence before and with 2 acres to do I was a little hesitant. After looking over the product on your website I decided to give it a try. Not near as hard as I thought it would be.
by
Response from Customer CareNov 10, 2019
We're glad to hear that the fence wire was easier to install than you expected! We hope that it's working well for your pets and really appreciate your review!

Customer review from sportdog.com
Sep 5, 2019
Great Decision
We are so happy with our Sport Dog Unit. We had the wire underground already. We had a different system. We had very poor support from our rep.. it was difficult getting battery replacements. We switched out the transmitter with the Sport Dog transmitter and put the new collar on out dog. She now gets a warning beep before crossing the line. She is complying so much better and we are very pleased. Our only regret is we didn't go with the Sport Dog first!!
by
Response from Customer CareSep 7, 2019
Thank you for your review. It's great to hear that this fence has been such a great solution for you and your dog! We appreciate you taking the time to share your experience and thank you for your feedback!

Customer review from sportdog.com
Feb 7, 2019
Easy to install but very sensitive. Collar goes off when...
Easy to install but very sensitive. Collar goes off when it passes by an electrical outlet indoors or outdoors. I have to set the buffer zone very low as my pet was zapped walking around on the patio which has outdoor outlets.
by
1 found this review helpful
Jul 3, 2018
Suuuuper fast delivery! Blew my mind. I ordered the fence...
Suuuuper fast delivery! Blew my mind. I ordered the fence at 3-4pm, and it arrived on my porch by 9am the next morning. As for the product itself, my dog hit the wire last night and jumped about four feet into the air... So, yeah. It is very effective. Gives me peace of mind!
by
May 29, 2018
Works great ...
Works great
by
Apr 16, 2018
Love it!
I have been super happy with this product! Only negative would be installing it. The collar will beep and vibrate when the dog gets close to the fence. But on my collar it only beeped the first couple weeks then it stopped..not sure why? But overall definitely worth the $$!
by
Response from Customer CareApr 16, 2018
Thank you for taking the time to leave your review, Shelby. We're terribly sorry to hear your collar is no longer beeping at the boundary. We understand how upsetting this can be. You may find it helpful to know your unit comes with a two year warranty. We have reached out to you directly to help with some troubleshooting and provide detailed warranty assistance. If you have any questions please feel free to reach out to us at 1-800-275-6797. We are always happy to help!