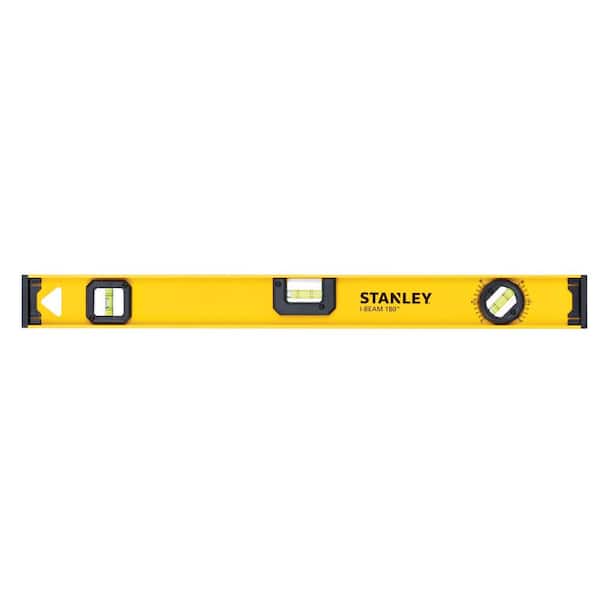 The end vial of this level rotates 180° for a range of situations. It is crafted from heavy-duty aluminum for rigidity and accuracy. A measuring scale is printed on the level.

Customer review from stanleytools.com
Sep 12, 2013
Great value for price
This is a great level & at this price point, it absolutely cannot be beat. It was sturdier than I was expecting (sturdy enough to last the average homeowner a very long time, but don't expect it to take as much abuse as some of the more expensive models are capable of), and I really like that it has a 24" ruler on the top. I also like the ability to rotate a vial up to 180 degrees, however, I think for most people this isn't quite as useful of a feature as it may seem at first glance, because at least for me, I don't generally work with much besides the standard 0, 45 or 90 degree angles, so I will likely just leave that vial set at 45 degrees. Still a nice feature though, and I'm sure some people may have more of a use for it. The only thing i would change would be to make the arrow on the adjustable vial a different color so it's easier to see. It's very small & clear & I almost didn't even realize there was an arrow at first. It makes it a little hard to adjust, especially if you're not in bright light. I'm going to remedy the problem by coloring it in with a Sharpie, but it would be nice if it came that way. Not a huge deal, but worth mentioning. Overall, nice product at an unbeatable price point.
by
3 people found this helpful
Nov 17, 2021
Does what it is supposed to!...
Does what it is supposed to!
by
Nov 17, 2021
Rating provided by a verified purchaser...
Rating provided by a verified purchaser
by
Nov 16, 2021
It’s a level. Not much to get excited...
It’s a level. Not much to get excited about.
by
Nov 10, 2021
Level
great level for small area measurement
by
Showing 1-10 of 230 reviews

Designed to fit easily in your toolbox andDesigned to fit easily in your toolbox and handle almost any leveling need, the Empire 12 in. True Blue Magnetic Tool Box Level features a Vari-Pitch vial that reads slope or pitch in inches per foot. This makes it ideal for setting up a grade or measuring a slope. The True Blue blue-banded vials and top-read window help provide easy readings and the full-length aluminum frame offers exceptional durability, making it able to withstand a 10 ft. drop onto concrete and still maintain accuracy.See Full Product Description

The Stanley STHT42496 24 in. Box Level (Non-Magnetic)The Stanley STHT42496 24 in. Box Level (Non-Magnetic) features a center block vial for durability and precise accuracy. This level was designed with large 12 mm tubular plumb vials for accuracy of 0.001 in. It has enlarged vial housing for bright lit vials which help visibility and also offers a MaxEdge bridged center vial which allows for a continuous marking surface and added durability. The shock-absorbing end caps are an added benefit for increased durability and longer life of your tool.See Full Product Description