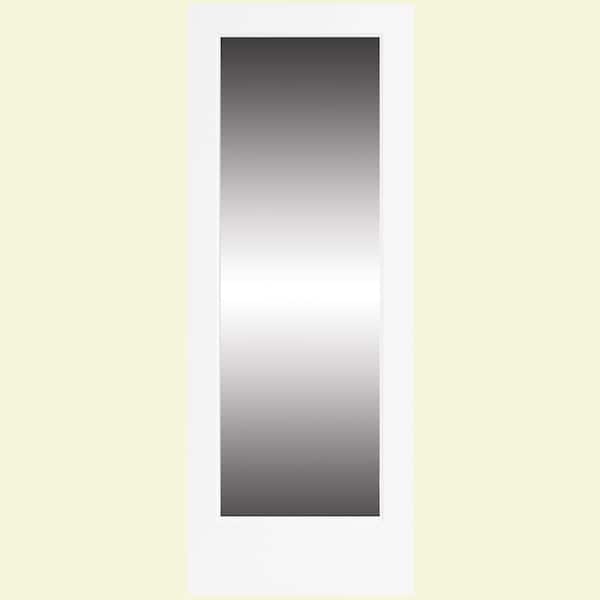 Single glass lite with primed stiles and rails interior door slab will add beauty while allowing light into any room. Door is primed and ready to paint to match any door.

0
Filter by:
Showing 1-3 of 3 reviews
Jul 8, 2015
door purchase
the door had a few minor shipping damages on several of the edges and one corner but figure that was the shippers and not home depot. was able to sand them out and then paint over and looks pretty good. Cleaning glass was very time consuming - seemed like overspray from the factory . Pleased enough I ordered a second door and it arrived - box looks ok - too busy to unbox til next Monday. generally very pleased and the home depot staff was very courteous. thanks don in florida
by
Feb 12, 2015
Good value for the money, but...
While the door looks and functions well after painting, the manufacturer could do a better job removing the plastic which was covering the glass and covered with primer overspray. This adds an extra hour to the prep and installation. Door was chipped at the bottom corner on arrival so packing job could have been better as well.
by
1 found this review helpful
Jan 18, 2015
Buyer Beware
This is a nice door. But it was very hard to remove the film off the glass. literally It took 1hr, for the simple fact that the manufactors sprayed the white paint on the film which also made a sloppy mess. I had to spray the glass in order to loosen the film. Not only that, after I got the film off I had to go back and take a razor and get the film off the edges of the door, it seems the film is embedded in between the wood and the glass. So nice door, but its time consuming to get it clean.
by
3 found this review helpful
Showing 1-3 of 3 reviews

The 2-Panel Eyebrow Top Molded Interior doorThe 2-Panel Eyebrow Top Molded Interior door from Jeld-Wen has a classic design profile that complements traditionally styled homes. This door features a modified cove and bead sticking profile with a smooth surface. We understand your time is valuable and we want to make the process of updating your home as easy as possible. Our factory-finish doors have a beautiful smooth finish that you cannot achieve by painting your doors with a brush. One way Jeld-Wen supports sustainable construction is by using recycled materials in the production of our Molded Interior doors. In fact, these molded door skins are made using 80% recycled content.View Full Product Description