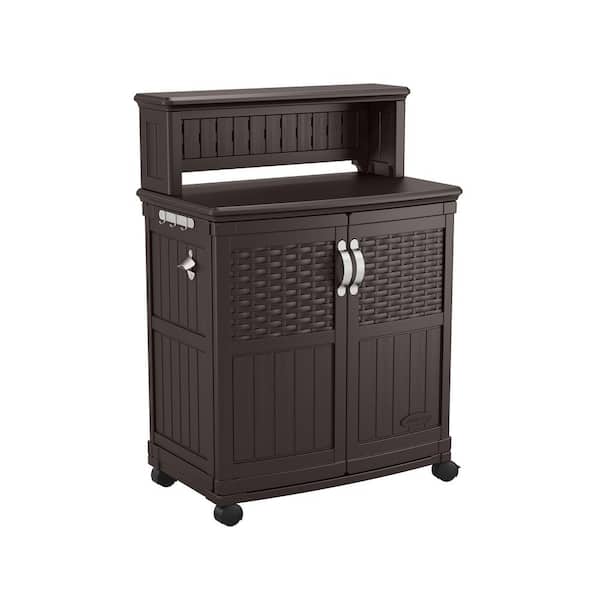 Outdoor entertaining just got easier with the Suncast Patio Storage and Prep Station. This piece makes a beautiful addition to your deck or patio and comes in handy for all outdoor serving and cooking purposes. There is plenty of surface space for food preparation, while the interior cabinet and included utensil hooks are perfect for organizing all of your grilling accessories. The product also features a quick access bottle opener and 4 rolling casters for easy mobility (2 locking casters). With its durable resin construction, the Suncast Patio Storage and Prep Station allows swift clean up after each use and is built to last throughout the seasons. Assembly is easy with minimal tools required. 5-year limited warranty. Item measures 19.5 in. x 44.25 in. x 31.75 in. Suncast takes pride in helping customers enhance their indoor and outdoor spaces with quality products that are stylishly designed. You take pride in creating a beautiful environment. We take pride in keeping it that way.

92
Filter by:
Showing 1-10 of 1,097 reviews
Jun 11, 2021
Perfect
I am so happy I found this. I entertain a lot in the summer and wanted a place for my outdoor dishes and glasses. This holds all that and all my garden necessities. It’s attractive and very useful.
by
Response from SuncastSupportJun 15, 2021
Thank you for your recent review of your Suncast Patio Prep Station. Here at Suncast, we value your feedback and appreciate your honesty. We are happy to hear you are pleased with your Suncast product. We look forward to serving you in the near future.

1 found this review helpful
Apr 28, 2021
Product works fine but does not appear as advertised
Everything about this - from the photos on Home Depot, to the photos on the box when it arrived, to the photos on Suncast's website, to the old unit I had that got damaged (not a product issue) and was being replaced - has metal handles and a metal hook attachment for grilling tools. The actual product, however, has those parts only in plastic. I called Suncast to have them send me the parts they advertise, and was told they no longer manufacture the product with metal accessories, and they are not available. That minor change - which, I'm sure, is much cheaper for Suncast to produce than the original - makes the product look like cheap and janky. Not like anyone thought the old one was high end or anything - it's obviously almost all plastic - but it certainly looked nicer than this. I will be returning it, as I expect a product to not look like a cheap facsimile of what is advertised.
by
Response from SuncastSupportApr 30, 2021
Thank you for your recent review of your Suncast BMPS6400. Here at Suncast, we value your feedback and appreciate your honesty. We look forward to serving you in the near future.

17 found this review helpful
Apr 22, 2021
Love!
We have a small house and large large porch so we love to entertain in the summer. I was always carrying things down our stairs to get to the porch. This saves me 5 trips by storing all of our stuff to entertain outside. It’s small but just what I was looking for!
by
Response from SuncastSupportApr 28, 2021
Thank you for your recent review of your Suncast BMPS6400. Here at Suncast, we value your feedback and appreciate your honesty. We are happy to hear you are pleased with your Suncast product. We look forward to serving you in the near future.

2 found this review helpful
Mar 28, 2021
Handy
Thai was a bit smaller than I thought but-still worked out rather well. We ended up buying a cutting board elsewhere with anti slip feet. Wish the cutting board came with this unit still but the company stopped selling it together. We added a knife block, paper towel holder and I bought shelves and bins for utensils and stuff for the hubbies smoker and BBQ. Took about 45 minutes to put together by myself. I’m 5’1”, 135 lbs, and feminine as heck but I really wanted my kitchen back! One way or another!
by
Response from SuncastSupportMar 29, 2021
Thank you for your recent review of your Suncast BMPS6400. Here at Suncast, we value your feedback and appreciate your honesty. We are happy to hear you are pleased with your Suncast product. We look forward to serving you in the near future.

7 found this review helpful
Mar 19, 2021
Had high hopes, but disappointed.
Even though grill station is cute, and is functional for what we wanted for patio grilling, I don't feel that it was worth $157.94 (I noticed that the price is now $179.00--YIKES)! The handles and hooks are PLASTIC (in the photo they look metal). Plus, the assembly WASN'T as described in the directions--there were suppose to be "pre-drilled holes" in the plastic parts, but they were ALL MISSING! Had to force the screws to screw into the plastic. It took a lot longer to assemble. Also, after we had it all assembled, I noticed that there were drilled holes in the top part of the station, where there aren't suppose to be any holes (see photo I've attached). And NO WHERE in the description photo does it show holes there. Have no idea what they are for. I felt like returning it, but husband wanted to just keep it, since we had it all put together. Well, in conclusion, we have several Suncast items on our patio, that we are very happy with, so this grilling station was surprisingly a disappointment. I'm hoping that it will hold up to the weather elements!
by
Response from SuncastSupportMar 23, 2021
Thank you for your recent review of your Suncast BMPS6400. Here at Suncast, we value your feedback and appreciate your honesty. We look forward to serving you in the near future.

3 found this review helpful
Mar 14, 2021
so far so good
Took my hub about an hour to assemble. Will update my review in A few weeks
by
Response from SuncastSupportMar 15, 2021
Thank you for your recent review of your Suncast BMPS6400. Here at Suncast, we value your feedback and appreciate your honesty. We are happy to hear you are pleased with your Suncast product. We look forward to serving you in the near future.

Nov 10, 2020
Cheap looking and missing hardware!
I just purchased this prep station and was excited to get it assembled. First off, I noticed that the photo of the item on the box was so much nicer than the actual product inside. But I was optimistic and hoped it would look better once assembled. Then I discovered that some of the hardware was missing. I called customer service to see about replacement nuts and bolts but gave up after being on hold for over ten minutes. I went to the Suncast website and looked up the prep station only to find that they do not offer any replacement parts. I cannot complete the assembly because the screws that I need are missing completely. If I had at least one, I could take it to the store to match up and purchase more. But not in this case.
by
Response from SuncastSupportDec 7, 2020
We appreciate the review, please feel free to reach out to us at Suncast Contact Center at 1-800-444 3310 and one of our agents will be happy to assist you .

With a capacity of 134 Gal. the Extra LargeWith a capacity of 134 Gal. the Extra Large Deck Box by Suncast has plenty of space for storing large furniture cushions, gardening tools and firewood. The piston-aided lid allows for easy access to your belongings and ensure that the lid will stay open while in use. for added security, this deck box is also pad-lockable to keep your items safe and secure (lock not included). The elegant design of this wicker pattern deck box will make a beautiful addition to any patio or outdoor setting.View Full Product Description

Add sophisticated style and storage to yourAdd sophisticated style and storage to your deck or patio with this Suncast Backyard Oasis Basic Unit. Offering a 130 Gal. interior capacity, providing easy storage for outdoor kitchenware, grilling utensils, patio cushions, throws and pillows. This unit includes a cut out for electrical cords, that can be closed when not in use and also includes a metal-reinforced, adjustable shelf that further increases your organizational opportunities. Durable resin construction is accented by sturdy, pad-lockable doors that provide superior strength and security (lock not included). Plus, the modern stylish reeded design helps accent your outdoor environment. Increase your storage capacity while beautifying your space with this Suncast Backyard Oasis Basic Unit.View Full Product Description

Introducing the new Rubbermaid BridgeportIntroducing the new Rubbermaid Bridgeport Storage Cabinet with all the stylish details of modern outdoor furniture. An extra-large storage space inside holds seat cushions, garden supplies or grilling accessories. The Storage Cabinet is made of weather-resistant material to protect your things from sun, rain and snow. You will love the Patio Chic outdoor storage solutions that look like furniture and last like Rubbermaid.View Full Product Description

The Rubbermaid 2 ft. 8 in. x 5 ft. LargeThe Rubbermaid 2 ft. 8 in. x 5 ft. Large Horizontal Storage Shed is leak resistant, dent resistant and weather resistant to help provide long lasting use. The shed roof and siding are constructed of a durable resin and a floor is included for extra strength and security. The shed's 2 doors give you easy access to an interior area that offers a spacious 32 cu. ft. storage capacity.View Full Product Description