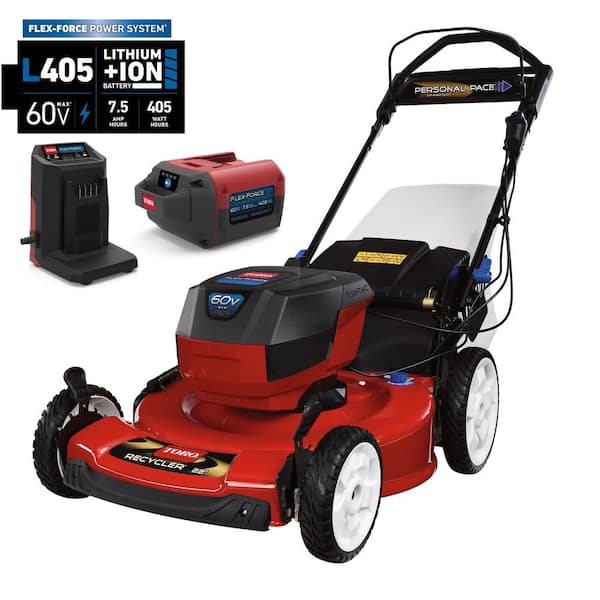 Beat your neighbors to the beach and leave them green with envy with Toro's 22 in. Recycler Personal Pace 60-Volt Max Battery Mower. You'll zip through jobs faster than ever with an extra-long 22 in. blade. This machine starts the first time, every time, and is built to last with a steel deck. You also control the mower's speed with the Personal Pace self-propel system. We've Got You Covered. Enjoy peace of mind with a 2-year full mower warranty mower and 3-year full battery. And as a Toro owner, you'll have access to nearly 4,000 servicing dealers across the U.S. and Canada ready to assist you. Count on it.

4
Filter by:
Showing 1-10 of 155 reviews
May 4, 2021
Blade was fixed so hard I broke the wrench
After 9 years my 2011 Toro 22 Recycler with gas motor broke. Great machine with reliable motor if you give it new oil from time to time. Changed the blade several times. Changed the self-propelling belt and other parts. All repairs somehow doable by yourself, no need to return to the shop. Bought the 22 Recycler with 60V-Battery last fall. Feels good, battery life acceptable. However, after 5 times cutting the lawn the belt to the self-propelling unit derailed and wedged itself between the belt pulley and the self-propelling unit. I do not know why and how. That is when I figured that to repair the new self-propelling mechanism, which now is in the back of the mower, parts are much harder to access, which was also confirmed by my local dealer. Problem was, that the dealer is now in the beginning of the season and will take about a week to localize the problem, not yet fixing it. I did not have the time to wait for such a long time, so I had to take the blade off, get the belt completely off and the take the s-p-unit apart. Biggest problem was to loosen the blade. I had to construct an extra long wrench to loosen it after braking one of my shorter wrenches. Why does Toro fix the blade that hard? I never had that in any lawn mower before. I have to admit that I am a little disappointed about how things worked out here, when you have to fix the mower yourself. Result: Great mower, if you have the time to have it fixed by your dealer. Hard to work with if you want to fix it yourself.
by Recycler22
Response from Toro Customer ServiceJul 22, 2021
Thank you for your review. We are sorry to hear that you had such a frustrating experience with your mower. Over time the Self-propel belt may stretch due to wear, making the mower feel less responsive than you’d like. The traction adjustment knob makes it really easy to adjust the traction. Visit toro.com/support for the full video tutorial. Should you require further assistance please contact us through Monday - Friday 8:00 am - 6:00 pm CT USA & Canada: 1-888-384-9939. For warranty consideration please visit a local authorized service dealer(Toro.com/locator) in your area.

Customer review from Toro.com
Sep 17, 2020
A Toro Electric. Yay!
Finally decide to replace my over 25 year old Toro mower. So happy with the new electric. Nice metal body. Runs great has excellent torque. So happy no more gas or tugging on a starter pull. Just push a button. Hope it lasts with just tune up maintenance like my old one did.
by SBM1

Customer review from Toro.com
Sep 12, 2020
Brand new
Unboxed the brand new mower, get it set up, battery charged, pull back the safety handle, push the button, and nothing. Thought we had a dud and about ready to return it. Followed the instructions in the book to a T. 1) Install fully charged battery pack 2) Insert electric start button 3) Squeeze the blade control bar 4) Press the electric start button. Nothing. Then, I called our local mower service shop
by VivianD
May 21, 2020
Excellent cut easy to handle
The cut is good and the handling is also excellent. The only negative is the battery couldn’t cut my 1/3 acre lawn without recharging. I also could not find any instructions in the manual or online to indicate if the battery can remain in the charger plugged in all the time between coats.
by Dave
3 people found this helpful
Apr 28, 2020
Best electric mower out there
The only thing stopping me from giving this mower 5 stars is the inability to push the mower with the blades disengaged. I often finish mowing a long way away from the garage, then I have to run the mower across the yard, leaving an odd angle across the grass I just finished cutting. It seems like no big deal, but that one strip of differently angled cut grass messes with my eye. Having said that, this mower outperforms the last two gas mowers I've had. Keep one battery on the charger while you're mowing, and you'll have no trouble finishing a 1/3rd acre lot in one session. Larger lots, you'll need to take a break anyway. The 7.5amp battery runs about an hour, and takes 60-90 minutes to fully recharge, so mow for an hour, swap batteries, and keep going, or mow for an hour, take a break, and finish when the battery recharges.
by Bill K

Customer review from Toro.com
Jun 13, 2019
So far I've mowed 5 times and I can honestly say this is by far the easiest mower I've ever used....
So far I've mowed 5 times and I can honestly say this is by far the easiest mower I've ever used. It has all of the features you'd expect from a Toro mower, plus all of the features you'd expect from a high quality cordless power tool. I am thoroughly pleased with this purchase and fully intend to get the string trimmer and snow blower (once it's released). They all share batteries, so that'll be 3 engines I don't have to maintain. I have a 0.6 acre lot, but maybe 0.4 acres needs mowing. 7.5 Ah battery lasts the full duration of my mowing session (about 45 minutes), with charge to spare. Not sure exactly how much is left, but you might just about get 50-55 minutes out of it. My lawn is steep, so you might also get more out of the battery if your lawn is flat, since you won't use the self-driving power as much. If your yard is bigger, you may need to get a spare battery and then just hot-swap them. Pros: - Push-button start, so there are no cords to yank. - Hot-swappable battery that ejects with a single button push and clicks into place - Self propelled rear wheels make mowing much easier (you could mow one-handed if necessary, and I have done so while holding a glass of water) - Blade RPM is regulated based on grass density, and will increase in speed to handle dense patches - Can be folded vertically for cleaning and storage - No engine to maintain, so no oil, gas, or gas additives needed. Moving parts are lubricated for the life of the mower. Cons: - Nothing that merits removing a star - When folded vertically, only two wheels are on the ground, which makes the mower difficult to push against a wall. You have to pull or lift it into place. Future models would do well to include small caster wheels for vertical storage. - No beverage holders. You mainly use a mower on sunny days, mostly in the summer heat. Why is there no bottle rack? If it didn't void the warranty, I'd drill two holes in the handle uprights for a bottle holder from a bike frame. It's more expensive than a standard gas mower, but you don't have to pay for gas or engine maintenance, so over the life of the product I would expect it to either even out or be a better value for your money.
by FatePhD
9 people found this helpful
May 23, 2019
Exactly what I've been waiting for!
This mower is exactly what I've been waiting for! I was using a 22" gas mower for years before it broke, and I was interested in a battery mower for the ease of use and no exhaust or gas smell. Last year I switched to an 80v Kobalt mower (Greenworks) and it was nice, but I needed to get a self propelled mower and longer battery life. Plus I was disappointed with the eco style blade on the Kobalt (dulls quickly and doesn't have a lot of lift).I really wanted to get an Ego mower because I have several Ego tools already. But going from a 22" to a 21" Kobalt wasn't ideal, and I decided my next mower needs to be brushless and a steel deck. Ego only offered that in a 20" mower.I recently came across this Toro and I'm blown away, it literally has every feature I would have hoped for. It's a 22" steel deck, brushless motor, 7.5ah battery (matches Ego), it has a wash out port for a hose and made to be rinsed, high rear wheel, the "Personal Pace" feels like magic, and it feels much more powerful than the Kobalt and it doesn't need to ramp up to higher rpms nearly as often. My favorite part about the Toro, is it seems to be the same mower as the gas version but with an electric motor. Same 22" deck, same belt drive for the self propel, same wheels, same blade... it's the real deal. I never tried an Ego mower to compare, but I definitely like the Toro more than the Greenworks/ Kobalt 80v mower I've been using. I haven't used the Toro in thick high grass or used it to bag leaves yet, but for an average mow this evening, it was excellent. It felt like a gas mower, but it's electric!I haven't been able to find any connection, but there are similarities between the Toro battery and my Ego battery rails and charge slots. They look similar, with some tweaks as not to be interchangeable. Ego makes excellent batteries, and I see this as a positive thing.
by Que
17 people found this helpful
May 21, 2019
great product
unpacked in less than 10 minutes, used 3/4 charge to cut my 1/3 acre property still had battery life, cut was even and did not clog, rolls backwards easily, great mower.
by bobonthejob

Customer review from ToroDealer.com
May 21, 2019
great product
unpacked in less than 10 minutes, used 3/4 charge to cut my 1/3 acre property still had battery life, cut was even and did not clog, rolls backwards easily, great mower.
by bobonthejob

The Toro 60V Max 22" Recycler Mower is theThe Toro 60V Max 22" Recycler Mower is the perfect excuse to up your cutting game on every level. Part of America's #1 brand of mowers, it makes easier and faster work of the entire job. Recycler® cutting deck with Vortex turbocharged airflow keeps clippings suspended longer, cutting them over and over. And of course, the finer the mulch, the finer your lawn. Personal Pace® self-propelled Auto-Drive transmission senses how fast you walk and adjusts in real time. It also knows when you're going up hills and sends extra power to the wheels. As part of the Toro 60V Flex-Force Power System® you get the advantage of the most powerful battery in its class*, which commands a full line of unbeatable tools. Go from tool to tool to tool, done and done and done.See Full Product Description