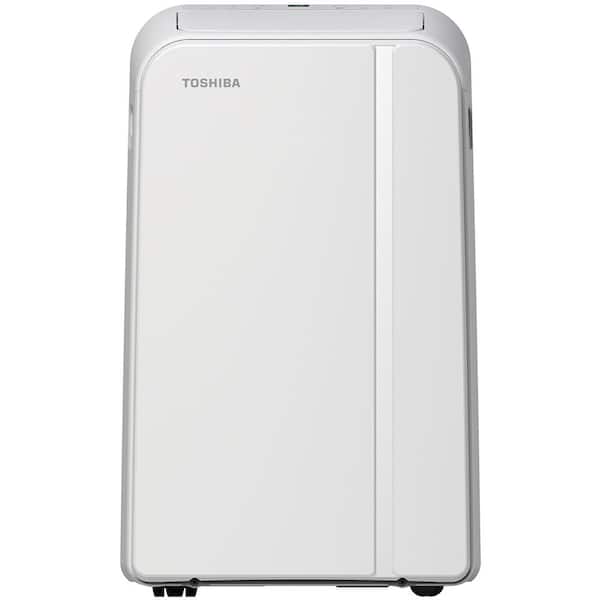 The Toshiba portable air conditioner has the cooling power you need to cool, dehumidify or ventilate up to 400 square feet while removing up to 4 pints of moisture from the air each hour. Smart functionalities include a smartphone app to control your AC through Wi-Fi from anywhere, at home or through the cloud, or even using the Amazon Alexa voice assistant with the Toshiba AC Skill. You can also control using the LCD remote control or the integrated electronic control panel and display. The unit has a robust and discreet design and enables quick and easy installation in most vertical sliding and casement-style windows - so you can move it around from room to room using the 4 integrated wheels. Intelligent features such as the 24-hour Timer, Sleep Mode and the automatic vent angle for better air distribution help you to personalize your comfort. You can cool, dehumidify or ventilate the space you need and get peace of mind with 1 year warranty by Toshiba.

7 found this review helpful
May 12, 2018
This portable unit has a lot of neat features and it's hard to beat the 9,000 BTU DOE rating. The...
This portable unit has a lot of neat features and it's hard to beat the 9,000 BTU DOE rating. The DOE rating indicates how the unit performs in a practical setting rather than ideal circumstances. If you are looking at portable air conditions and the DOE rating is not listed then buyer beware. Although a little difficult to configure, the smartphone app has the same controls as the remote control and the front panel on the unit itself. I did have to talk to the support folks before getting the app to complete the install process but the problem may be my phone or a software issue (operating system, security software, etc.). I also had one issue when installing the window slider into the window frame. The slider was too wide for my window so I had to shorten the length by cutting off a section of 'slider b'. Other than that installation was easy. My garage, which is about 600 square feet, is also my workshop and the temperature can get unbearable during the summer months. Although this unit is rated for only 400 square feet other 14,000 BTU units with a smaller DOE BTU rating mention cooling rooms as large as 750 square feet. Plus the automatic vent angle seems to really help move the air. This unit my not keep my entire garage at 70 degrees on a 90 degree day but my work area which is about 10 feet from the air conditioner is cooler after about an hour of run time. Moisture removal is an important feature to me too and this unit can remove up to 96 pints a day which is pretty impressive. This unit pulls 12 amps but fortunately I have multiple circuits in my garage so I don't have to worry about tripping a breaker when I use my corded power tools.
by
Response from Toshiba Lifestyle TeamOct 22, 2020
Hello Jimmy. Thank you for taking the time to post your review of the Toshiba 14,000 BTU (9,000 BTU, DOE) 115-Volt Portable Air Conditioner. We're happy to hear that you're satisfied with your unit. -Toshiba Customer Care. (BBB A+ Accredited Business)

May 9, 2018
This is a powerful portable air conditioner from Toshiba that not only cools a 400 sq ft room, but also dehumidifies and ventilates.  The installation instructions were clearly written and easy to follow.  Because our weather has not gotten real hot or humid yet, we have not used the air conditioner or dehumidifier features for any length of time...we just tried and tested those features.  We did, however run the fan a few afternoons to circulate the air in our house.  It worked great and because it is so powerful, we were able to leave it on medium.  It's nice that the louver can be adjusted too with just a push of a button so we can point the flow of air right where we want it.   It can also be operated from a smart phone (you need to download the ap), or with the remote control that is included or directly on the display panel.  It is super simple to set to exactly what you need or want your climate to be.  It rolls easily with 4 wheels to change location, but we only move it when using the fan.  It even has a sleep mode and a 24-hr timer.  It looks great and is not an eye-sore in the room.  It has a nice shape and design, it is stable, well-made and a high-quality machine. I look forward to summer this year, knowing that this Toshiba 14,000 BTU Smart Portable Air Conditioner with Dehumidifier and fan is going to keep us cool and comfortable!
by
Response from Toshiba Lifestyle TeamSep 11, 2020
Hello Maddy. Thank you for taking the time to post your review of the Toshiba 14,000 BTU (9,000 BTU, DOE) 115-Volt Smart Wi-Fi Portable Air Conditioner. We're happy to hear that you're satisfied with your unit. -Toshiba Customer Care. (BBB A+ Accredited Business)