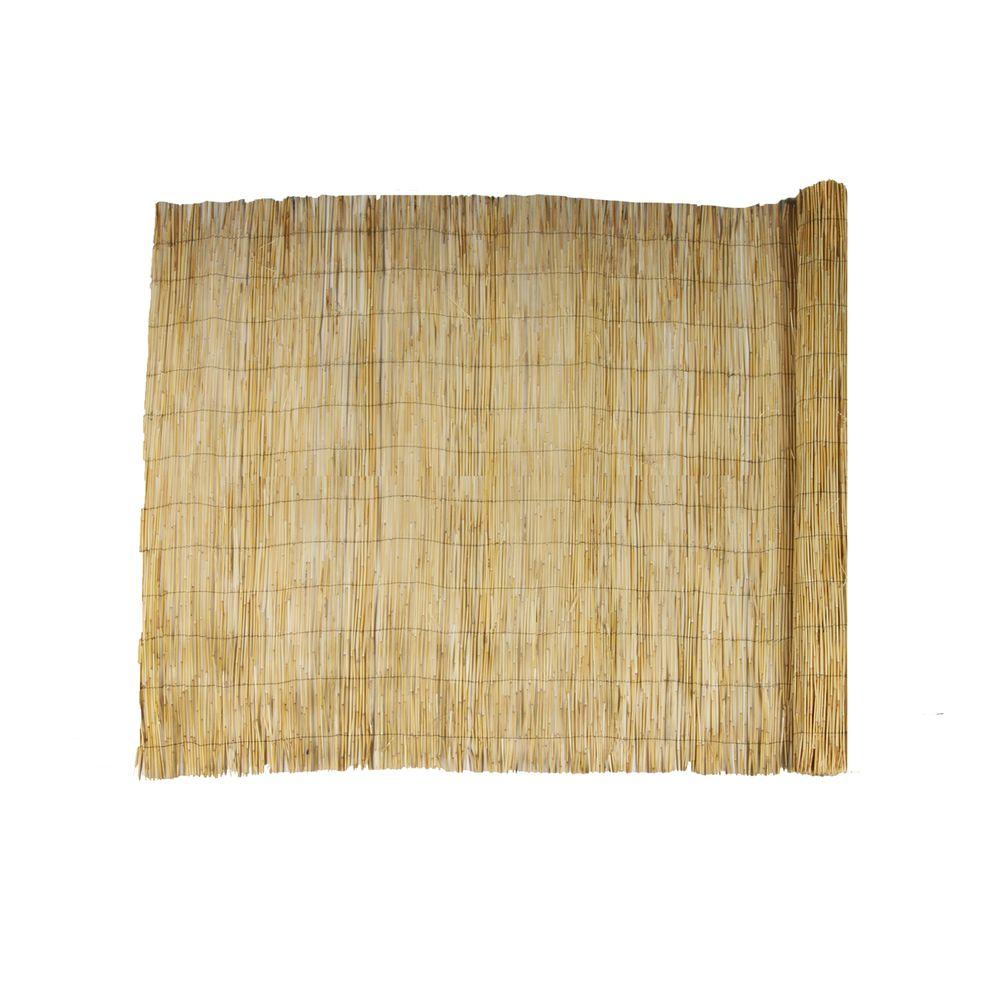 This product is a quick and economical solution to provide some additional privacy to your outdoor space or used for bordering your yard or garden. The 6 ft. tall x 16 ft. W natural reed fence is made for patio shading, concealing unsightly objects, soundproofing, duck blinds and other outdoor uses as well. The reeds are woven together with vinyl-coated, rust-resistant wire every 4 in. to help provide some privacy and protection from the wind. Natural reed fences are perfect for covering chain-link fences and can create a tropical feel to your backyard or garden. Light filters through 1 layer of this fence. Repeat 2 or more fence layers for more privacy.

what tools doI need to install the natural Reed fencing?

It depends on what you will mount it to; but I dread asking a question myself in return getting more questions and not getting any answers. So, I will try to break down each application with a particular answer. MOUNTING on a WOODDEN FENCE/WALL: (A) You can easily use a staple gun (Home Depot sells an inexpensive Ryobi Staple Gun for $49) and it will save you a lot of time and grief, especially trying to mount yourself. (B) You can basically use a Hammer and what I call U-Nails (HD identifies as: Grip-Rite 3/4" Hot-Dip Galvanized Staples, 1 LB @ $5), or (C) if you have some Roofing Nails, this can work as well and easier to hammer in compared to the U-Nails. Just hammer the roofing nails into the wood at an angle to hold up the reed fence. Also, a little trick; use a hair comb (that's right) to hold your nails in place while you hammer in, especially if you are installing yourself. MOUNTING on a CHAINLINK/WIRE FENCE: (D) You can easily tie with (HD brand: ToolPro 18-gauge Hanger Wire, 300 FT @ $10) OR (E) Use Plastic Electrical Zip-Ties (can purchase various colors at Home Depot in their Electrical Dept), or purchase some Zip Ties at the Dollar Store, but their zip ties seem to not have much of a range of selections of color or quality in compared to HD, but will work), OR (F) what "I PREFER" buying a Viagrow Spool Cut-to-Size Coated Vine Ties (3-Pack, 164 FT Spools @ $12 - located in the HD-Nursery); OR (G) do what our grandparents did, Re-Use old Bread Ties, or re-use old 14-gauge copper plastic coated wiring (typically used for installing irrigation valves), will work as well. I hope that these answers get you in the right direction and save you time and money. Good Luck!!

How do to weed whip between the fences

I just rolled it out and put it up.

Can this be stained with fence stain?

You can stain, paint, or spray paint; but the application should be "sprayed on" instead of "brushed" on.

Can this be cut down in height?

If i tie this to a railing would it hold up?

I have mine tied to a chain link fence, it gas held up so far.

This is a intended to be used outdoors. It works fine as a yard barrier (fence) . Can water get through it if you use it as a ceiling on a structure? Absolutely!

Can you attach this to an existing wood fence?

Yes. On the chain link fence I attached with wire.

What's the diameter or width of the roll of this when it is rolled up? I'm trying to figure out w...

Approximately 10 inches. It's also quite flexible and probably can be manipulated a bit more for a snug fit.

Can this fencing be cut ? Height is too tall for what I am needing

Yes it can be cut. A pair of hedge clippers worked best.

How do you put this over a screen

I used twistie ties as it is very lightweight and the ties are thin enough to fit through screen holes without much damage.

The Greenes CritterGuard Trellis fits perfectlyThe Greenes CritterGuard Trellis fits perfectly into 2 ft. wide Greenes Fence Company Cedar Raised Garden Beds, creating a place for your plants to climb to new heights, and a barrier from unwanted critters. The trellis can be used in any sized garden or garden bed to help support your climbing plants. Installation is easy: simply push the trellis into soft soil. Each panel measures 21.5 in. long x 47.75 in. tall. Stakes push 7.75 in. into the soil leaving 40 in. of trellis above the soil. Patent pending.See Full Product Description