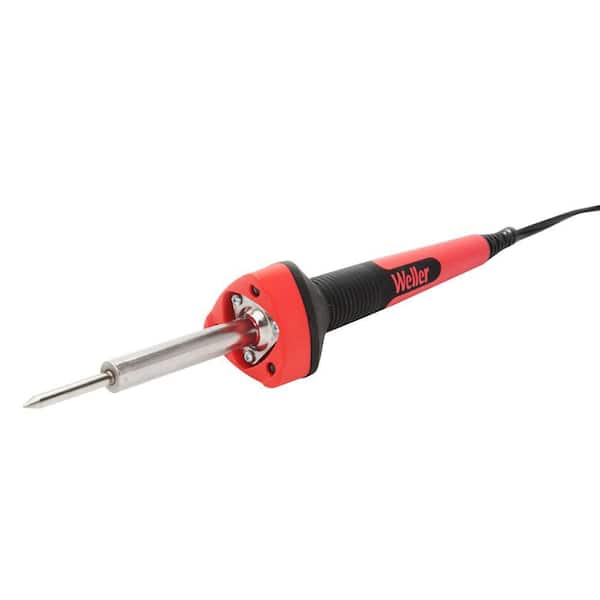 1 person found this helpful
Aug 3, 2016
Light Weight Portable Soldering Iron
Let me start by saying I’m a soldering novice. I haven’t done much soldering other than simple experimentation now and then. I’ve used other tools in the past, just experimenting including soldering guns, torches and even actual irons heated by a flame. I wanted to pick up this kit for occasional work on small electronics or other projects. The kit comes with the soldering iron, a very basic metal stand (punched from a thin piece of sheet metal and bent into a stand like shape), three soldering tips, a soldering aid tool, a small coil of lead free solder, and a user’s guide. The user’s guide is essentially just a square of folded paper with some basic soldering instructions, safety guidance, soldering iron care, and warranty printed in three languages. The typeface is pretty small, so don’t forget your reading glasses. When I first plugged the iron in, before I even started to solder, the tip produced quite a bit of smoke while it heated. I was glad to have a vent hood fan in place over my work bench to send the smoke outside. The soldering tips screw on and off and are securely held in place when finger tight. The soldering iron is not temperature adjustable and seemed to take several minutes to heat up enough to melt any solder. The lights included in the handle focus nicely on the tip and provide adequate lighting for working on a project, even in a dark area, without much of a shadow being produced by the tip itself. I found the iron easy to hold and manipulate at my work bench. I would have liked the power cord to be more supple and perhaps a foot longer. Since the power cord is a little stiff, and the iron itself is fairly lightweight, you need to be very careful to set the iron down securely so that the power cord doesn’t cause the iron to move unexpectedly. The included stand is almost useless because it can’t prevent the iron from moving if the power cord is jostled. I was able to solder together a few wired electronics connections, so I achieved the goal for which I obtained this iron. Overall, I’d say this iron is good for occasional, light duty soldering or when portability is required. Since it doesn’t include features like an on off switch, temperature control, or an appropriate stand, it is less suited for anyone looking to do frequent or heavy duty soldering..
by Tim2013

RYOBI introduces the 18V ONE+ 40-Watt SolderingRYOBI introduces the 18V ONE+ 40-Watt Soldering Iron (Tool Only). This innovative tool provides ultimate mobility, allowing you to take it directly to your work space. It can quickly reach a temperature up to 900°F and has an iron holder for safe storage. The LED status indicator lets you know when the tool is heating up, when it's reached its maximum temperature, and when it's cooling down. The 3 ft. reach of allows users to complete more applications. Best of all, it is part of the RYOBI ONE+ System of over 225 Cordless Tools that all work on the same battery platform. Backed by the RYOBI 3-Year Manufacturer's Warranty, the soldering iron includes a fine point tip and solder coil. Battery, charger, and extension cord sold separately.See Full Product Description

Another great product from the leading brandAnother great product from the leading brand in professional-quality soldering equipment since 1945. In addition to its famous irons and soldering guns, Weller is also recognized as a leader in advanced electronic rework and repair equipment and irons for sophisticated industrial applications, as well as numerous products for DIYers and hobbyists. Now Weller offers you more innovation and quality with better heat performance, new switch with safety cap detent, battery orientation markers, 180 solder joints, dual heat setting, co-molded handle and the benefits of cordless for ultimate portability. While still maintaining compatibility with existing Weller tips.See Full Product Description