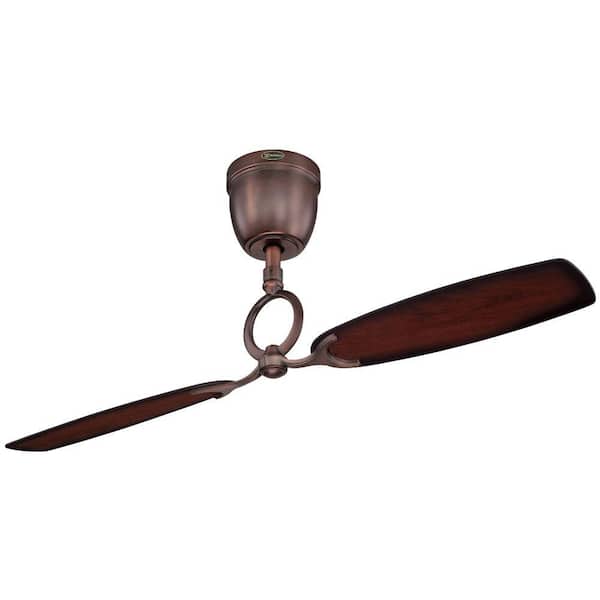 With its refined oil brushed bronze finish, 2 rounded rectangular reversible Applewood with shaded edge/dark walnut plywood blades, the Westinghouse Aerialist 52 in. Oil Brushed Bronze DC Motor Ceiling Fan will add modern contemporary style and comfort to any room. A DC motor ceiling fan requires less electrical energy and reduces power consumption up to 65% over standard AC motors. Ideal for rooms up to 400 sq. ft. (20 ft. x 20 ft.), this fan features a DC 125S motor. 6 fan speed handheld remote adds maximum control over your indoor climate. Run the fan counterclockwise in the summer to keep your space cooler and clockwise in the winter to recirculate warm air from the ceiling. The Aerialist comes with everything you need for installation, including a 12 in. lead wire, remote control with reverse function and a 12-Volt battery. It is backed by a lifetime warranty on the motor and a 2-year warranty on all other parts. Product reference number 72016.

How would I go about comparing 2 blade to multiple bladed fans, pitch/shape of blades, DC/AC moto...

I don’t know about the technical qualifications. The fan was easy to install ( my son installed in about 30 minutes) and is very quiet. Two blades seem to be able to provide as much air flow as the traditional 5 blade fan and with only two blades there is less dust build up and will be easier to clean.

Are 2 blade fans more quiet than 3,5,6 or more blades -- all other factors being equal?

The Aerialist ceiling fan is a DC motor ceiling fan. There are many different factors that can come into play in regards to fan noise.

I need the diameter measurment of the upper motor cover please. Im using a cathedral ceiling mount. Thank you Gm.

The Aerialist ceiling fan cannot be hung in a sloped/angled ceiling.

Hello, How do I make the fan shorter? to unable the "Flush mount installation for low ceilings a...

This fan cannot be flush mounted or made shorter in anyway. It is recommended this fan is installed on a 9 foot ceiling to then have a clearance of at least 7 feet from the blades to the floor.

What is the CFM?

Is there a light kit that can be added to this fan?

No, a light kit cannot be added to this fan.

The pictures show a dark blade - above - but also a light blade. How do I order the light blade?

You need to click on the light blade (brushed nickel) under Choose Your Options and it will bring up the information for the brushed nickel ceiling fan.

You must use the remote control that comes with this fan and you should not operate it is using the wall switch to turn it on and off.

The 18.5" is from the top of the canopy (base where it is touching the ceiling) to the blade.

How low does the blade hang from the ceiling?

The Aerialist fan will hang 18.5 inches from the base of the canopy to the bottom of the blade.

1
Filter by:
Showing 1-10 of 13 reviews
May 29, 2018
Perfect¡¡
Perfect¡¡
by Sayala
Feb 8, 2016
Enjoy the breeze
The Pros: Installation was easier than I thought it would be. With just a slim set of instructions, there wasn't a ton of assembly that I had to do. It was obvious there was some thought put into making it easy to mount to the ceiling, including a nice hook on the mount to hang the motor on to so I could connect the wires before bolting everything in place (and the hook is positioned in a way that it doesn't get in the way of turning the wrench). This meant less strain on my arms and neck than other items I've installed on the ceiling. Though there wasn't much to put together, you'll still need to have a couple tools handy as there weren't any assembly tools included (I used a philips screwdriver and an 11mm wrench). The box recommends to use a Westinghouse ceiling mount for best results. I didn't need to use this because I was able to attach it directly to the studs in the ceiling where my previous fan was, but keep this in mind if you're doing a new install. Once the installation is complete, the fan looks great. The design is of a sleek and minimalist variety that would be a great piece in most rooms. Since it only has two blades, it appears to take up even less space for the amount of air it can circulate. Speaking of the circulating air, this fan puts out an impressive amount of energy when it's on the highest setting; it is more than enough to stay cool, or maybe even fly a kite. What's nice though, is you certainly don't have to have it on high. Using the included wall-mountable remote, you can put it on any of the 6 settings from low to high and in between. Just like most fans, it allows to you reverse the air flow if you'd like. I also found that the fan is well enough balanced that there wasn't much wobble or noise from the hardware. They even planned ahead in case you didn't get a perfectly balanced install, there are two optional 5 gram weights included that you can apply. I didn't find myself needing to use these. The Potential Cons: As you may have already noticed, this fan does not have a light on it, so if you are in need of overhead lighting, this might not be the best option. And even though there is not light, the fan still hangs down fairly low, which is fine if you have a ceiling that is 7 or more feet high (the box mentions this as well), but if you have lower ceilings, be careful as the blades might get too close for comfort to your head. As I mentioned above, this fan puts out a very healthy amount of air circulation and with that, it can at times sound like a helicopter when a) it's on the highest setting and b) you're standing directly beneath it. I still only call this a potential con because I don't think I would notice this as much if I had ceilings that were a little higher.
by BigJerm

3 people found this helpful
Dec 7, 2015
An Aerial Aesthetic Assault on Air
This is a beautiful, elegant twin bladed fan that is sure to bring attention to your room. It is nickel finished and has reversible fan blades with both silver and piano black sides. The installation was easy with straight forward instructions and included everything except everyday tools like screwdrivers and wrenches. It has a remote control with 6 different fan speed settings and a reversible button as well. Thankfully this product has dip switches in the remote so you can change the frequency of the signal as not to interfere with other remote fans in your house. It also has a "smart" frequency learning system which enables you to only change dip switch settings on the remote and not have to change dip switches in the fan receiver, which can be a pain. It moves air very well and the motor action is smooth with a slow ramp up start in order to not put too much stress on the motor. My only gripe with this fan are the low hanging height. I'm not a tall guy (5'8") and it still hangs a little close to my head with a 8' tall standard room. The motor assembly, motor shaft, and decorative center loop are all too long in my opinion, which makes the fan hang lower. Also at the highest speed setting, the fan really cuts into the air and almost sounds like a helicopter with a thwacking sound. This isn't a huge concern because I would rarely need to run the fan at full speed and otherwise the fan is nearly silent. This is a great fan and I plan to use it every night.
by AntMan

6 people found this helpful
Oct 20, 2015
Very Stylish
I think this is a very nice fan. You have to sacrifice the light but it looks very good in my dinning room. The installation was very simple and the directions are very easy to follow. I wasn't sure how much air this fan would move but it does a very good job. Seems to move the air around in the attached rooms as well. The remote is a very nice touch and makes it easy to adjust from the living room.
by Raymond

2 people found this helpful
Oct 5, 2015
Defective with constant wobble
First the good: Very stylish with an aero theme. Very quiet. Most of the time, you can't hear it run. Moves a lot of air despite being only 2 blades. The blades are angled so that the low speed moves a lot of air. Uses very little electricity. Installation was fairly easy, not the best. The remote control work well. Next the bad: Wobbled badly. See the youtube video showing the wobble at the very slowest rotation speed. No amount of time and effort using the balancing parts was successful. It later became apparent that the large decorative part from the motor to the blades was made crooked and this had nothing to do with balancing. After many attempts, I was able to fix the problem easily, but unfortunately H/D will not allow me to communicate the method. Too bad. It's not possible to attach a light. The remote control is the only way to operate the fan. If the batteries are dead, no fan. If anything stops the blades from moving, you have to repeat the setup process all over. This happened to me even while gently touching the blade to stop it after pressing stop on the remote. Very annoying. I finally got everything working the way it should, but it took way too much time and effort. it is with great hesitation that I recommend this product. Wish it went better.
by GaryDoug

The Home Decorators Collection Chaplin 52The Home Decorators Collection Chaplin 52 in. Brushed Nickel Ceiling Fan has a modern style design and real wood blades in distressed gray. This is a hugger style ceiling fan, so it’s designed for low ceilings. It uses a DC motor that is 70% more efficient than traditional fan motors. The newly designed remote control has many features such as nine speeds, a light timer, comfort breeze, light dimmer and fan reverse function.See Full Product Description