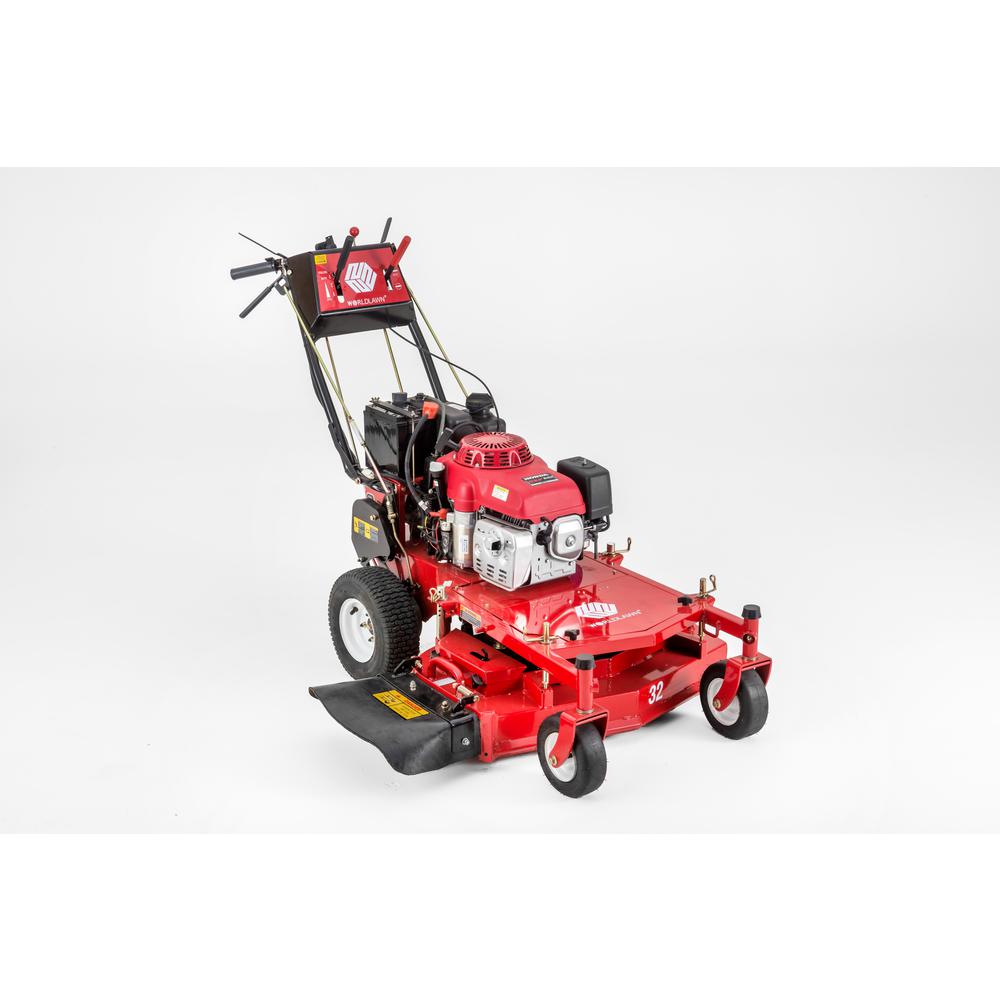 The Worldlawn 32 in. walk-behind blends the tough durability and professional quality of a commercial mower with the affordability of a homeowner machine. But this 32 in. walk-behind is not your typical consumer lawnmower. With its welded frame, fabricated deck and Honda engine, it gives you value that will last.

When will this model be available again for online purchase in 2020?

Unfortunately this model will no longer be available through Home Depot

What is the actual maximum cutting height? The specs say 4 inches but I'd like to be able to go t...

I mow at the max height, 4 inches. It’s pretty accurate. There is some room to raise the deck if you can use wrenches. I don’t think you’d be able to get another inch, though. Maybe half an inch, maybe...

Is there a unit without an electric start?

Currently we are out of those units.

can you attach a silky rider behind the mower

I just use my magic carpet and float right behind it, occasionally using my magic carpet to help push it up steep slopes so I don't tear up the damp grass. I may be part of the RoadRunner Turf Crew but I really try not to turf the customers lawns, I use my Jeep to do that when customers refuse to pay. We only turf the lawns after using total vegetation killer to write out Pay your lawn crew in the front yard and wait a month. No Payment then it's 4 wheels of fury using my Jeep or P/U as a delivery system. Must be done after 1 am with the 42" light bar on strobe blasting terrible music (to them,me=pig rolling in poo poo) through the 1800 watts (true rms) 12" sub that will bass bounce them outta bed onto their heads & for good measure another 600 watts (true rms) rockin the 2 sets of kicker 6.5 components, straight redneck sh|t, like a lil Hank Williams the 3rd. LOL that was a fun but semi fiction, semi non fiction story.

Google Honda GX340 or GX390, that's the models that another user said they are outfitted with. The HD or Lowes version comes with the GX340 and from a dealer the GX390.

Since this is a belt drive, where can you buy drive belts or blade belts? And how long does it ta...

Great question and this could be the biggest minus for this machine if you don’t live near a dealer. I had the blade belt break after a week. I called up Worldlawn and initially their response was to get one from a dealer. The closest dealer to me was well over an hour away. I don’t remember how, but eventually I talked to a great support guy at Worldlawn. He mailed me out a belt free of charge. I remember him saying that the belts are very strong and should last a long time. I think he said that mine must have been installed inside out. If you’re a contractor, there’s probably a lot of wisdom in getting replacement belts before you need them.

Whats the horse power of the motor

dose worldlawn make a sulky for it

I checked their website and the Sulky/Velke's they had (3 or 4 models) didn't have compatible model #'s. Where there is a will there's a way by bolt or by weld I will find a way to make a 2 wheel Sulky/Velke ride on attachment fit.

Is these mower a zero turn mower

Does this mower really have a Honda engine?