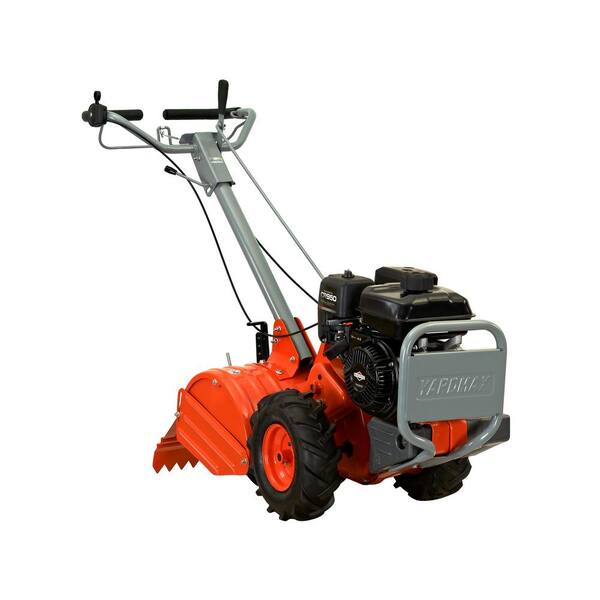 This easy-to-use, true dual-rotation garden cultivator delivers unmatched ground breaking power, and makes for easy garden preparation no matter what soil type you have. With a forward rotation for cultivation and a counter rotation for deep soil tilling, the high-powered engine delivers optimal torque and rotational speed. Convenient, single-hand operation of this soil tiller allows users to stand and steer from either side, while the self-propelled drive system offers enhanced control. Use forward rotation for cultivation, and use the counter rotation for deep soil tilling. Till and cultivate an 18" wide path per pass, and use the 7 depth adjustments and a 6.5" working depth to cover more ground quickly. 13" self-sharpening tines easily cultivate any soil type.

34
Filter by:
Showing 1-30 of 280 reviews
Jun 15, 2021
yardmax tiller
Tiller assembly - flimsy throttle - not easy to fill oil - need flexible tuble or funnel - machine would not start after over 200 pulls tried everything to get to start. Called support and they said to disconnect oil sensor - picture below - yellow - wait 30 minutes and keep the black connected. Why put a sensor on that does not work?? Will wait to see if that works. Not happy with purchasing a new unit not to have it start - will write another review if we ever get it started. Also was told need only fill one oil reservoir - they run together - inside one is difficult to reach. Hope this helps others with this situation.
by
Response from TEAM YARDMAXJun 17, 2021
Thank you for bringing this to our attention – we'd like to apologize for the issues you are having. We want all customers to love their product and have a great experience using it. We encourage you to give us a call at 1(847) 327-0566, then select Option 2. We can offer assistance and potential solutions. Please know your feedback will be documented and we’ll use it to help us improve our products in the future. Thank you!

The YF20-RTT 208cc Rear-Tine Tiller fromThe YF20-RTT 208cc Rear-Tine Tiller from YARD FORCE has the power and performance to get your garden prepared for the season and keep it maintained all season long. The hardened steel tines cut through hard dirt, roots and more to get the job done quickly. The YF20-RTT is easy to maneuver with forward and reverse self-propelled drive and equipped with self-sharpening blades to make plowing dirt easy.See Full Product Description

The Champion Power Equipment 100380 19 in.The Champion Power Equipment 100380 19 in. Rear Tine Tiller is designed to be the workhorse behind your gardening passion. The 212cc engine powers a cast iron, gear-driven transmission housed in a heavy-duty cast-iron case. This machine features convenient handle controls and counter-rotation tilling. The most challenging ground is no match for the four 13.8 in. hardened steel tines and their bidirectional shredding design. The 19 in. tilling width and up to 8 in. tilling depth help you tackle large plots of ground with minimal effort, helping you move from tilling to planting in a flash. The large treads on the 13 in. self-propelled agricultural tires provide excellent traction, and since they are self-propelled, you only need to guide the tiller while it muscles through tough terrain. The easy-adjust depth gauge runs behind the tiller, allowing you work at a consistent depth and providing additional balance in different conditions. Our rear tine tiller is the perfect tool for the gardener who’s serious about long-term performance and durability. Designed with a low oil shut-off sensor, this unit holds 0.8 gallons of gasoline and has a 0.5-quart oil capacity (recommended 10W-30). EPA certified and CARB compliant, buy with confidence. Champion Support and our nationwide network of service centers will back your purchase up with a 2-year limited warranty and FREE lifetime technical support.See Full Product Description

The Southland 212 cc Gas Rear Tine TillerThe Southland 212 cc Gas Rear Tine Tiller is the perfect tool for any job from gardening and light tilling to hard groundbreaking work. The 10.3 ft. per lbs. 4-Stroke OHV engine is both powerful and efficient. The gear-drive system provides maximum fuel and engine efficiency, allowing the unit to run on less power input than when operated manually and the gasoline-powered engine allows the user to till a large area in little time. This powerful tiller works to complete the job quickly and effectively while still being easy to maneuver. The 11 in. counter-rotating tines dig deep into the earth to remove weeds and allow for fresh soil to be upturned and the 13 in. heavy-duty, pneumatic tires stabilize the tiller over rough terrain. This machine boasts an 18 in. tilling width which allows the tiller to cover a large amount of space in 1 pass while still being easy to maneuver and capable of making sharp turns. The Southland Rear Tine Tiller makes easy work of any garden or groundbreaking project.See Full Product Description