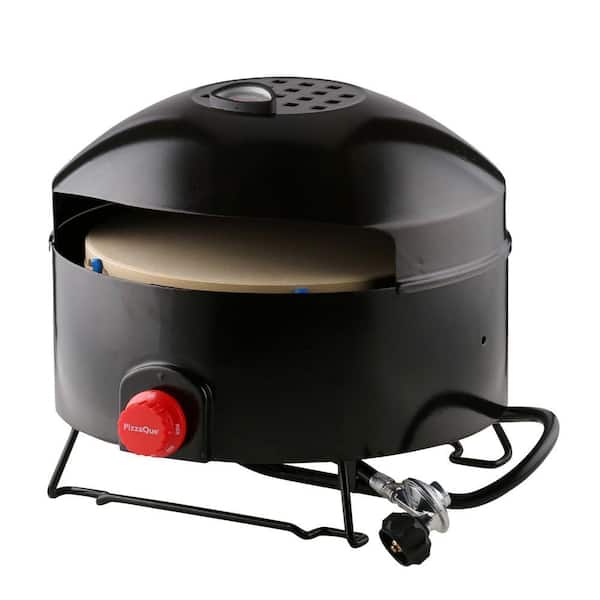 The PizzaQue Portable Outdoor Pizza Oven is a revolutionary pizza cooker that uses high heat to make crusts crunchy on the outside and chewy on this inside. This portable outdoor pizza oven makes creating pizzeria-quality pizzas at home or on the go fast and easy. It hooks up to a 20 lbs. propane tank or it can be converted for use with a 1 lb. propane cylinder (adapter sold separately). The included pizza stone accommodates pies up to 12 in. Dia.

0
Filter by:
Showing 1-10 of 33 reviews
Apr 12, 2016
Better than carry out....
Purchased this unit and decided to give it a try. We are still getting the hang of it but it's a PERFECT addition to our camping and backyard ensemble. Make sure you keep the sauce away from the edge of the dough so you don't get to much of a mess on the stone. Works great with cornmeal to slide pizzas off and on.
by
4 found this review helpful
Jan 21, 2016
Bake Real Pizza At Home!
Performance Rating: 5 stars Ease of Assembly: 4 stars Quality and Workmanship: 4.5 stars Customer Service: 5 stars Pros: First, about the performance of the unit. I tested the unit outdoors when the temperature was 28 degrees F and no wind. Starting the unit took 3 or 4 tries but once lit, the oven reached a temperature of 700 F, as measured by the built-in oven thermometer, within about 15 minutes. As instructed, I lowered the temperature to between Hi and Med and waited five minutes. In the meantime I dusted a wooden, 12 inch, pizza paddle with rice flour, topped the paddle with parchment paper that also had been dusted with rice flour, and then placed the pizza on top of the parchment paper. The rice flour makes it very easy to slip the pizza and paper onto the oven stone, a necessity because the oven opening is rather small and restricted both laterally and vertically. I placed the pizza and parchment paper onto the oven stone and waited four minutes instead of the recommended 3 minutes because the pizza was extra thick and because of the low outdoor temperature. After 4 minutes I rotated the pizza half way around using metal tongs and removed the paper. After a total of 8 minutes I increased the temperature to Hi. After another half a minute or so I removed the pizza from the oven, checking to ensure that the bottom was nicely browned; it was. The edge of the pizza was beautifully puffed (see photos) and nicely flecked with dark brown spots. The topping was beautifully baked and slightly browned. The under-crust was evenly baked and perfectly browned (see photo). The texture and flavor were excellent! 5 stars here. Customer support: 5 stars Cons: The assembly was easy but could have been easier if the following design changes were implemented. Aligning the holes in the leg supports was a bit of a chore. Using pointed sheet metal screws instead of machine screws would make it easier to insert the screws through the holders and into the legs. Secondly, the burner got in the way of my screw driver, so tightening the screws was a bit awkward. Rotating the location of the screws 75 degrees or so in either direction would solve this problem. The unit comes with a piezo-electric starter (like any grill); mine was bent too far away from the burner for a spark to jump from the starter to the burner. Bending the needle-like starter closer to the burner solved that problem. The piezo-electric starter is attached by way of a piece of wire with no connector on the end. One just pushes the end of the wire onto the connector. This is a bit flimsy and a proper connector would not only be more reliable but also easier to attach. I contacted customer support regarding some of these issues and their response was excellent and earns 5 stars. Summary: If you have been waiting for a reasonably priced unit to make pizza at home that looks and tastes like the real thing, this is it. Buy it!!
by
11 found this review helpful
Sep 1, 2015
Best Pizza Ever. Our new go to gift.
This pizza makes most delicious pizza ever. We have given this as a graduation and a wedding gift. We also had a neighborhood pizza cook off using this oven. This is perfect for camping, a college student or just in your back yard. One word of caution - too many toppings do not make for a good pizza.
by
17 found this review helpful
Dec 24, 2019
It's good but it need to make a door open and close for the front.
It's good but it need to make a door open and close for the front.
by
Feb 7, 2019
5 Star Review
Rating provided by a verified purchaser
by
Dec 26, 2018
What a great deal what a great item...
What a great deal what a great item
by
Oct 24, 2018
Easy to assemble ! I just watched their step by step video on their website . Couldn't be easier ...
Easy to assemble ! I just watched their step by step video on their website . Couldn't be easier ! Work's great. Thank you .
by
Aug 15, 2018
Easy to assemble, works great ...
Easy to assemble, works great
by
Apr 24, 2018
So much fun for my family...
So much fun for my family
by
Feb 21, 2018
Pizza like Wooster street in New Haven.
Pizza like Wooster street in New Haven.
by
Showing 1-10 of 33 reviews

The BakerStone Original Series Grill TopThe BakerStone Original Series Grill Top Pizza Oven Box lets you enjoy delicious, wood-fire-style pizza and oven roasted delicacies anytime, anywhere. Just place the Pizza Oven Box on the cooking surface of your grill, turn the burners to HIGH and preheat. The patented 5-sided stone baking chamber utilizes convective, conductive, and radiant heat transfer to quickly and evenly cook a variety of foods. Inside, it can reach temperatures up to 900ºF to bake pizzas in under 4-minutes, just like a traditional wood-fired pizza oven. It is not just for pizza either. Be sure to wow the crowd at your next cookout by using the BakerStone Portable Gas Pizza Oven Box to bake bread and cookies, sear off steaks, or serve up an assortment of oven-roasted meat, fish, and vegetables. The Pizza Oven Box can be placed on the cooking surface of most 3 burner or larger gas grills and full-size charcoal grills generating a wood-fired like cooking environment. Includes wood pizza peel and turner/spatula.View Full Product Description

Explore all of the endless possibilitiesExplore all of the endless possibilities you can create with the Cuisinart 3-in-1 Pizza Oven Plus. This 1-of-a-kind unit combines 3 cooking functions in to 1 appliance. pizza oven, griddle and grill. As a pizza oven, the unit features a 13 in. cordierite pizza stone which retains and distributes heat evenly across the surface for a perfectly cooked crust every time. The stone is secured by pegs on the bottom of the grill grate that not only keep it centered in the oven, but slightly raise it off the surface to allow for natural convection heat around the pizza. The oven will reach temperatures of 700°F and up and cooks pizzas in 6-minute to 8-minutes. The lid also acts like a standard grill lid, flipping up and down, allowing for greater cooking versatility while griddling and grilling. When not in use, all of the cooking surfaces neatly pack away on the storage shelf below.View Full Product Description

Turn your grill into a pizza-making machineTurn your grill into a pizza-making machine with the Cuisinart Grill Top Pizza Oven Kit. The kit includes the Grill Top Pizza Oven Box and a 12 in. Aluminum Pizza Peel. The Grill Top Pizza Oven Box is powered solely by your grill. The oven sits directly on the cooking surface of your grill and is powered by the heat source of your grill. The oven features a cordierite baking stone that is ideal for retaining heat to produce a perfectly cooked crust. The inside of the oven features stainless steel sides that provide reflective heat to the top of your pizza for evenly cooked toppings. The oven is equipped with a temperature gauge that allows you to easily track the oven's temperature while in use. The oven can be used for much more than just pizza. It is perfect for baking and roasting a variety of foods like breads, fish, chicken, macaroni and cheese and so much more. The 12 in. Aluminum Pizza Peel is the perfect tool for easily transferring pizza to and from the oven. The peel features a stylish wooden handle that folds down to allow for compact storage. The Cuisinart Grill Top Pizza Oven Kit work with gas, charcoal or pellet grills and will fit most 2 plus burner to 6 plus burner gas grills.View Full Product Description