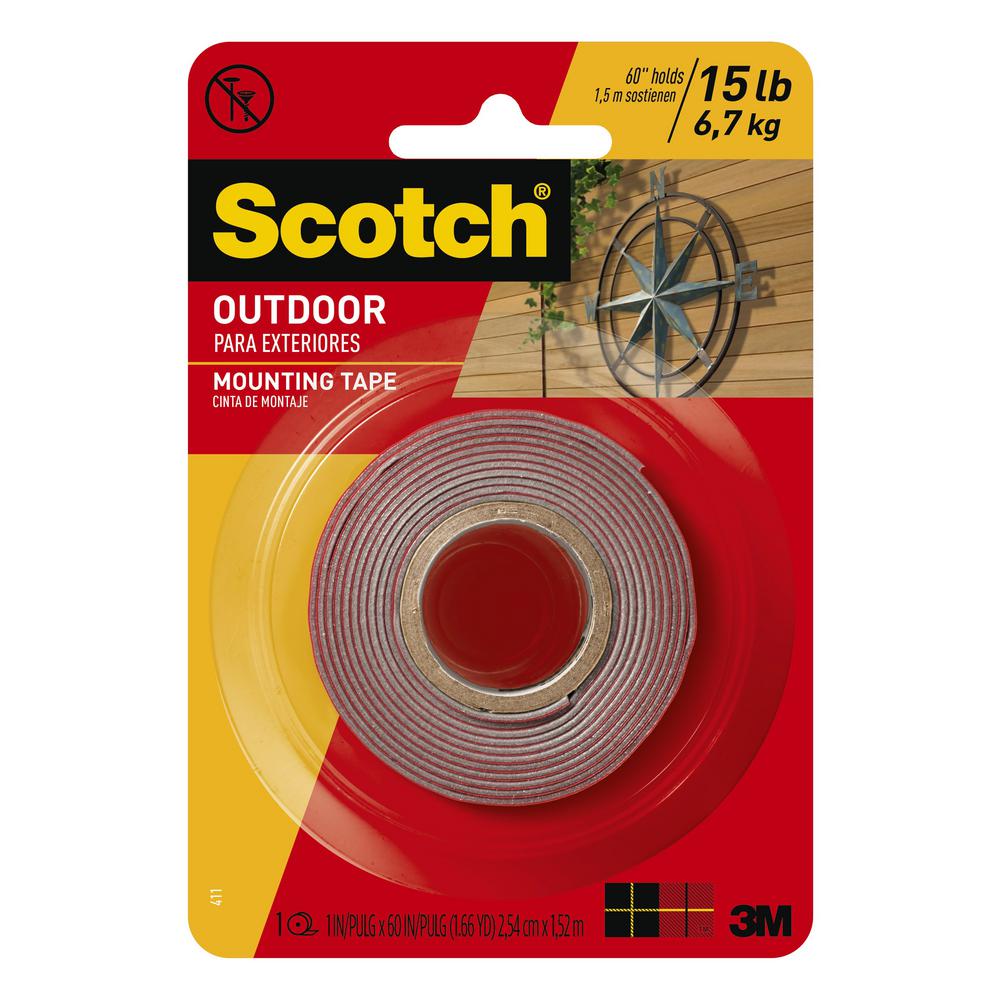 Very Heat Resistant and Strong
April 3, 2013
Quality :
5
Value :
5
This tape was used for a lot of applications. It's as must have a thing as duct tape. (1) Originally selected it for keeping the alarm magnet fixed onto a sliding door frame that faces the sun. It' was a simple but maddening problem because the aluminum frame opposes adhesives. -Tried every other kind of tape, superglue, epoxy, hot glue and it just fell off. The alarm would blare so often I could never set it. The indoor version of the double sided tape would melt and then fall after a week in the Central FL summer. Under the premise that its-possible-that-it-could-exist searched for a theoretical outdoor version. Found it and the magnet has been up for 2 years straight and still going. Yay! (2) Later used this for a mailbox project involving the mounting of black background letters on a new, black post office box. The box is out in front unobstructed so it gets dangerously hot as it receives light 100% of the day. This is the kind of sun that burst two of my heavy duty water hoses. It's been 2 years and the letters are still securely fixed. *** Careful in applying it because it's VERY strong. When putting on the metal address numbers I thought about moving them to the right a bit. It was so stuck on that removal seemed difficult with a little bit of a bad idea flavor -so plan ahead and rehearse the application plan. I plan to mount an outdoor junction box for mp3 jack and outdoor amplifier in the porch. If the mounts on the outdoor speakers give me trouble, I will use this tape too! As a chemist I'm astonished how well the adhesive chemistry works in the REAL WORLD. It holds 5 lbs. To think there's a 10 pound version!
Pros: Very Adhesive, Easy to Use
Was this helpful?
26
0
KIARA
This is the good stuff...
February 17, 2021
This is the good stuff
Was this helpful?
0
0
DAVID
Works great. Easy to use, and sticks to everything....
January 29, 2021
Works great. Easy to use, and sticks to everything.
Was this helpful?
0
0
PERRY
Using it to keep a front porch outdoor carpet from...
December 23, 2020
Using it to keep a front porch outdoor carpet from blowing up in strong winds. Tape seems to adhere well to concrete floor, but not so tightly to back of woven carpet, without some weight on the top. So far so good, but too early to tell for sure. May need to double or triple the width of the tape, especially at 2 corners of the carpet that are closest to the front edge of the porch.
Was this helpful?
0
0
MARY
It held a sign outdoors, on brick, when other items...
December 23, 2020
It held a sign outdoors, on brick, when other items couldn't do it.
Was this helpful?
0
0
Indiesindie
I used this tape to install a door mirror and...
December 17, 2020
I used this tape to install a door mirror and it worked perfectly. I couldn't use nails on the door so this worked perfectly.
Was this helpful?
0
0
HomeDepotCustomer
Rating provided by a verified purchaser...
November 27, 2020
Rating provided by a verified purchaser
Was this helpful?
0
0
Response from 3M Social CareNovember 30, 2020
Thank you for taking the time to leave your review. We are sorry to hear you were unsatisfied with the product and would love to gather some details about your experience. Please connect with our team at 1-800-494-3552 Mo-Fri 8am-5pm CT.

SANDE
November 10, 2020
Was this helpful?
0
0
Jack123987
NY
Doesn't stick at all
June 28, 2020
Customer review from
Really poor adhesive and hard to untach from the covering
Was this helpful?
0
0
Response from Social CareJuly 2, 2020
Hello, thank you for taking the time to leave your review. Your experience is not what we would expect, and we would appreciate the opportunity to discuss this with you and gather further details. Please connect with our team at 1-800-494-3552 Mo-Fri 8am-5pm CT. Thanks again, and we look forward to your call.
HomeDepotCustomer
So far, yes
May 20, 2020
So far, yes
Was this helpful?
0
0
Review this Product
Share your thoughts with other customers