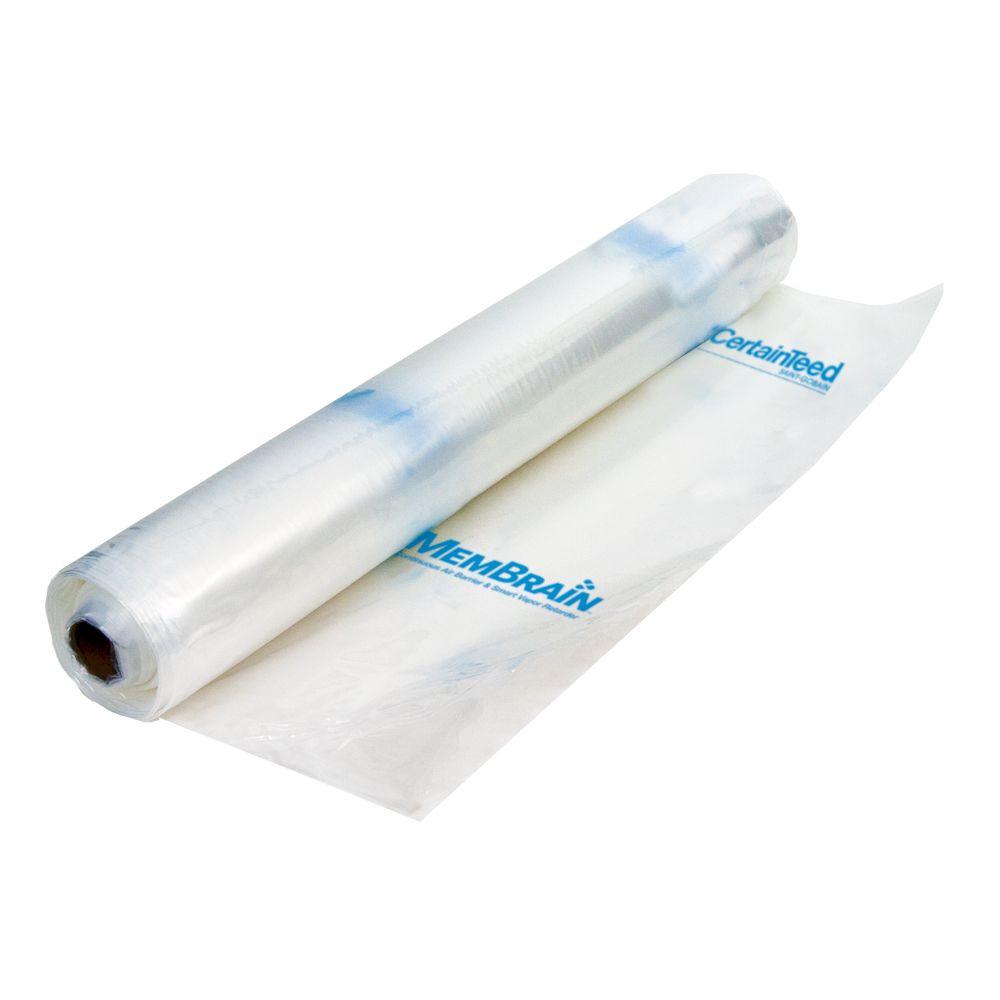 Fairly easy to install; obscure directions
April 14, 2016
Quality :
5
Value :
4
Seeds Program Review
(What's this)
The wrap unrolls fairly easily, and cuts with a single-edge razor blade through all four layers very easily. Although the instructions indicate that it can be used only for interior use, I had a need for it on the protected side of the edge of the garage where the sewer pipe comes out: Between the landscaper's work around the area and recent storm activity, the vinyl siding along that edge had blown off and was damaged beyond functional and aesthetic use. I also needed to replace the foam insulation panel between the garage wall and the siding, so, given that rain rarely hits that edge (there's an overhang), I decided it was worth the little extra effort to protect the middle surface. After installing the foam panel (in hindsight, I could have installed the wrap between the garage wall and foam panel!), I overlapped two pieces of the wrap, that I cut to size, over it. The instructions state that staples should be spread 12-24" apart, presumably to reduce the number of holes that penetrate it, and, thus, keep it functioning to prevent mold. However, the small area made that impossible, so, I stapled every 6" to keep it upright. The 2 mm thickness kept the sheet relatively in place, though it tended to flop over itself as I was stapling and trying to keep a smooth, wrinkle-free, layering. It took all of 5 minutes to do this small area, and I am very satisfied that it will protect much better against the elements than if I had left it alone. Before getting this product, I was going to use winter window insulating wrap, which is only a little thicker than food-style plastic wrap, and is made of petroleum product, rather than nylon, as this wrap is. As for value, it may seem expensive, but, it covers a lot of area, which, if it is exposed to a high humidity, will probably pay for itself in preventing mold, mildew, dirt, etc. As such, I believe it is worth the expense, and fairly easy for a do-it-yourselfer, though, if you are going to do entire walls, you should have at least one other person to help hold up one end, as I will, when I have to replace the shower, which is a few months off (plenty of wrap left!). I would also point out that the single-page instructions are very obscure, and I had to guess at what they were talking about (for one thing, it doesn't say whether the logo side should be facing out, up, or whatever; perhaps it doesn't make a difference, as it would with similar wraps, but, I erred on the logo-side-out-and-right-side-up side!).
Pros: Easy to Install, Easy to Use, Easy to Work With, Good Size & Weight, High Quality
Cons: obscure instructions
Was this helpful?
0
0
MECzech
Yorktown, NY

Looks to be a great product.
February 23, 2016
Quality :
5
Seeds Program Review
(What's this)
Our kitchen/bathroom remodeling project has progressed, ceiling and rebuilt 2 exterior walls are insulated and now we used over insulation this vapor barrier (pic.1) . Installing drywall will be next step. Just before we started using this product I found from product info that this vapor barrier is laid over unfaced insulation. Too late for us, because we have used faced insulation (surplus from previous improvements stage). We laid this vapor barrier over it anyhow and I hope, it will work well. Other use I found for placing this membrane as a vapor barrier for framing of shower stall to protect wooden studs under the cement board (pic 2) (waterproofed with red waterproofing from inside of shower stall). We were two people handling this membrane so that installing went very easy. It's a light material which gets stapled to studs and with little care while working with it, it does not tear easily. Inside the boxed wrap are very detailed instructions (pic.3) (English & Spanish) with pictures, advising how to work with membrane, how to cut it over larger openings and electrical boxes (pic. 4 & 5). I hope product will work well for us at least during seasonal very humid weather.
Pros: Easy to Install, Easy to Use, Easy to Work With, Economical, Good Size & Weight, Great Value, High Quality, Light Weight, Reliable, Seals Well
Was this helpful?
1
0
Dale
Maine

Not for exterior side of walls!
October 9, 2015
Quality :
3
Value :
4
Seeds Program Review
(What's this)
I obtained this product to use on a project to replace some exterior rotten wooden cladding. The wood had rotted out and my plan was to pull off the rotten wood and replace it with new cladding. The box states that this product prevents moisture vapor from entering the wall cavity in winter and allows vapor to escape the cavity in the summer. It goes on to say how the home can be protected from harmful moisture in the walls by installing in basements, bathrooms, laundry rooms and exterior walls. OK sounds good, and I imagined that it is a similar product to the wraps one sees installed to provide a vapor barrier. Inside the box on the instruction sheet, we learn however that this product has to be installed on the inside side of the wall cavity, i.e. on the drywall side rather than on the cladding side. In that case, how could it possibly prevent outside moisture from entering the cavity??? Outside moisture gets to the cavity before encountering the product! The instructions inside the box state that it is not suitable for use as an exterior vapor retarder. That piece of information is nowhere to be found on the outside of the box. I decided to go ahead with the installation anyway as this is what I had. There was already a layer of Tyvek underneath the rotten cladding anyway so I decided to simply install the MemBrain over that and in the correct orientation. This review should thus be read with 2 facts in mind: a) it is supposed to be installed under the drywall and not the cladding b) I have no way to tell how effectively it works, which would take some years of controlled testing. The instructions give good clear information on how to roll it out and hang the product on the studs and sill (inside the building). The plastic sheeting is transparent and has the product name printed on it so that one can tell which side should face outwards. It is folded so that the top edge can be stapled along the top of the wall and then unfolded down into the room. In reality of course it will unfold as one goes to staple it along the top of the wall. In my case, the wall consisted of pink insulation between studs, sheathing, Tyvek and shiplap boards. I removed the wooden shiplap and then installed the Membrane plus ½” foam insulation and the T1-11 siding. The MemBrain was easy to cut and staple in place. The outside of the box (and also the website) includes two diagrams of how the product prevents moisture coming in during the summer during high humidity, and keeps it in, in the winter. The diagram makes absolutely no sense at all though because water vapor (represented by blue arrows) is shown in both cases to be coming into the house! I think the arrows in the ‘summer’ diagram should be reversed 180° to indicate that moisture can get out, but not in. See pictures provided. Rather disconcerting.
Pros: Easy to Install, Easy to Work With, Light Weight
Cons: Inconsistent
Was this helpful?
3
0
Response from THD customer supportOctober 20, 2015
Dear Valued Home Depot Customer, We reached out to MFG for more information and below is their response. “Thank you for your detailed feedback. It is correct that MemBrain is intended to be installed in the interior of the home. Let us explain how MemBrain works so that you better understand the diagram on the box and information contained on this website. MemBrain works like traditional vapor retarders in the way that it keeps moisture from entering the wall cavity in the winter when moisture drives from interior to exterior. However, MemBrain stands apart and helps protect your walls better than traditional vapor barriers. In the summer, the sun actually drives moisture from the humid exterior through to the interior. If you have a traditional vapor retarder installed, this moisture would meet, condense, and be trapped within the wall and potentially cause harmful mold and rot. MemBrain intelligently senses this change in humidity and opens up to allow that moisture to escape into the interior space where the air is conditioned and moisture will be removed by your HVAC system. This keeps your walls dry year round. For more information, please call our customer service group at 800-782-8777." Thanks, The Home Depot User Generated Content Team
Doityourself
Best on the market! My go to vapor retarder!
January 10, 2021
Best on the market! My go to vapor retarder!
Was this helpful?
0
0
Jerry
Was very happy with CertainTeed MemBrain. Just installed it. Was sturdy and easy to use and wor...
December 13, 2020
Was very happy with CertainTeed MemBrain. Just installed it. Was sturdy and easy to use and work with.
Was this helpful?
0
0
HomeDepotCustomer
Rating provided by a verified purchaser...
December 5, 2020
Rating provided by a verified purchaser
Was this helpful?
0
0
HomeDepotCustomer
Good product. Really does make walls and rooms warmer...
November 27, 2020
Good product. Really does make walls and rooms warmer with it installed. Good purchase.
Was this helpful?
0
0
MAUREEN
Works great! Easy to hang...
November 10, 2020
Works great! Easy to hang
Was this helpful?
0
0
HomeDepotCustomer
Rating provided by a verified purchaser...
October 8, 2020
Rating provided by a verified purchaser
Was this helpful?
0
0
Review this Product
Share your thoughts with other customers