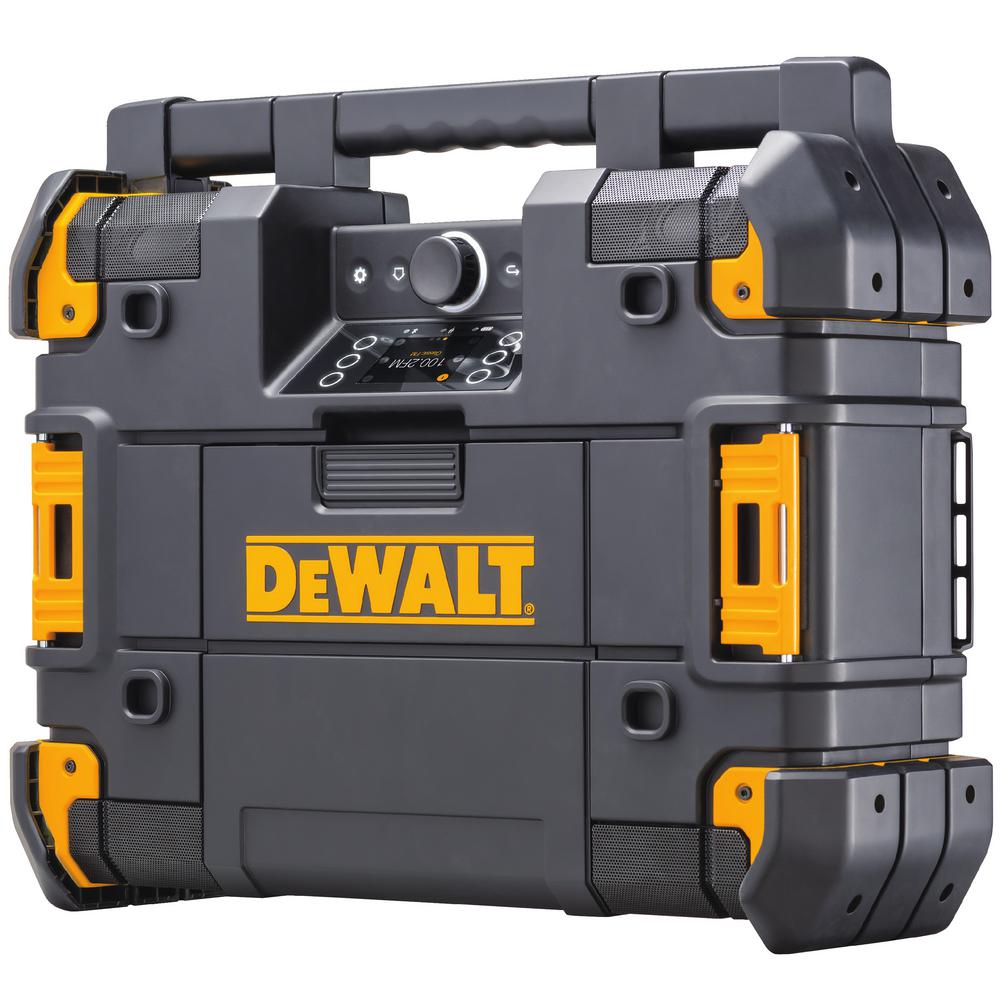 (9)
Sort By:
Delta88olds
Chicago, IL
Great sound quality but room for improvements
June 14, 2020
Customer review from
I previously had the original ToughSystem radio and was very impressed with the sound quality but I wanted something compatible with the higher capacity FlexVolt batteries for camping. This TStack is a great unit but I am disappointed that the screen doesn't have a true indication of the battery level. Rather it has an LED color indication to show the state of the battery or you could navigate through the phone app which shows an actual battery level. I noticed that the ToughSystem 2.0 has almost an identical interface that does show an actual battery level, I just don't understand why they wouldn't incorporate that into this radio. I do like the bigger compartment for the phone over the original ToughSystem but it becomes fairly cramped when there is a FlexVolt battery with the power cord. I don't like that this radio still has an external transformer in the power cord, it would be nice being able to just plug an extension cord into this unit similar to the jobsite fan while still maintaining the battery charger feature. Another flaw I've come across is while I'm in the bluetooth feature, the screen becomes very pixelated. Overall this radio has exceeded my expectations in terms of ease of connectivity with my phone and audio quality.
Was this helpful?
0
0
MNelson72
Indiana
Great sound
May 10, 2020
Customer review from
Received this as a replacement for my 2.0 radio. It does not disappoint. Great sound and now flexvolt compatible.
Was this helpful?
0
0
mane1991
New York
Great sound
November 5, 2019
Customer review from
I bought this a week ago and everyone at the job site Everyone at the job site loves it including me obviously! Everyone asked about it and I recommended it because the sound it’s just great and the whole radio just looks heavy duty... now we are all ready to work [This review was collected as part of a promotion.]
Was this helpful?
0
0
ImpulseBuyer
Gainesville, Fl

I'm an amateur musician who builds guitars in my spare time. And so, I have to be a stickler when...
October 4, 2019
Quality :
5
Seeds Program Review
(What's this)
I'm an amateur musician who builds guitars in my spare time. And so, I have to be a stickler when it comes to the quality of the sound from my guitars. This has made me even more discerning when selecting a suitable radio for my shop. This Dewalt DWST17510 job site radio delivers on sound quality! There's enough bass to rattle my saws and you can hear the mid range over my drill press. However, it could use a little improvement in the higher frequencies. Drum cymbals for instance can be heard more clearly on my high-end studio monitors... but remember, this is a job-site radio at one tenth of the cost! Besides, my studio monitors can't survive a 5-foot drop, charge my DeWalt tool batteries or be played in the rain. This is a must-have if you can't live without music in your shop. Runs on batteries or A/C and streams Bluetooth too! Highly recommended!
Pros: Accurate, All In One, Durable, Easy to Use, Good Size & Weight, Light Weight, Long-Lasting, Strong, Sturdy, loud and clear
Was this helpful?
2
0
Joe164
New York, NY
Amazing sound quality!
June 26, 2019
Customer review from
I bought this about a year ago I’m so happy with it I take it to every job site can’t work with out it [This review was collected as part of a promotion.]
Was this helpful?
0
0
Frank30
Romeoville,IL
Best Radio !!
May 6, 2019
Customer review from
I was looking for a radio for a wild to take to the job site but I wanted something tough durable and all-around good quality then I saw that the STAK MAKES a radio to connect to my boxes that was a no brainer I was very surprised with the quality and sound of the radio very good radio highly recommend it the only downfall not really liking the charger but that’s why I always carry extra batteries around I think that was the only downfall
Was this helpful?
0
0
Apost12
Eldridge ia
Worst radio ever
March 14, 2019
Customer review from
I bought this two months agao and the the subwoofer seal came unglued and sounds like horrible.
Was this helpful?
0
0
EleEng
Beavercreek, Ohio