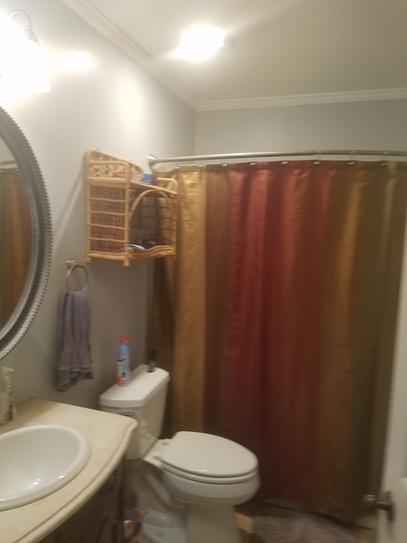 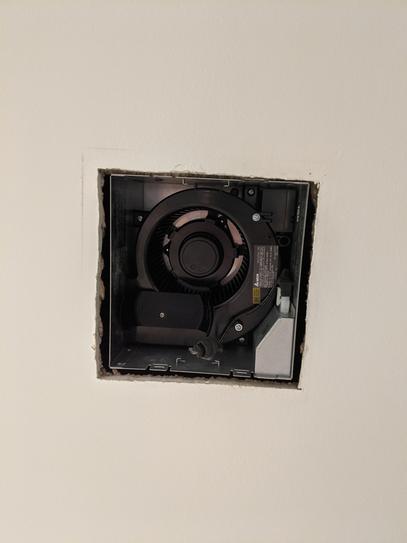 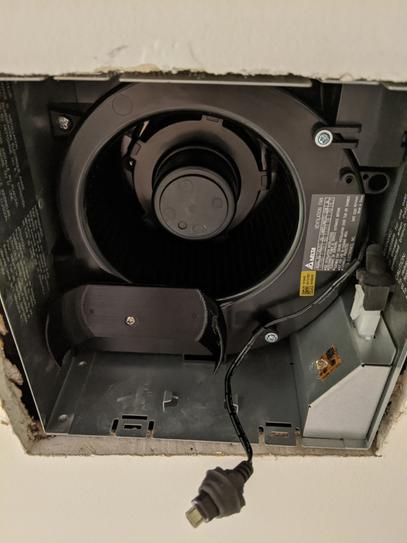 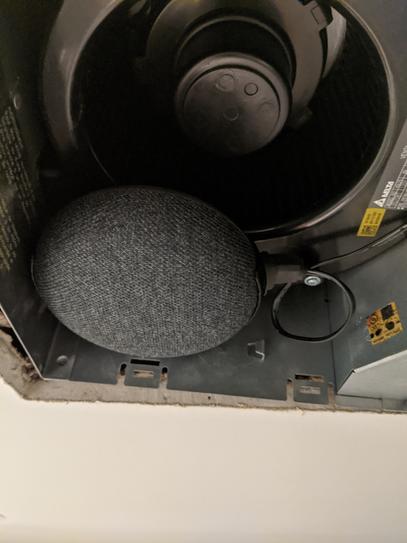 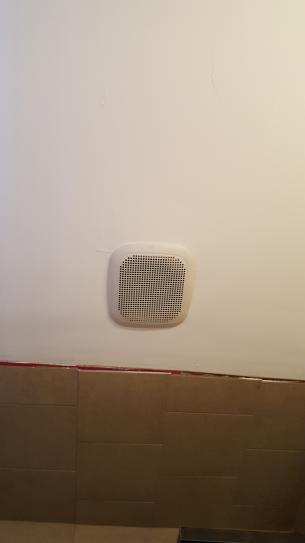 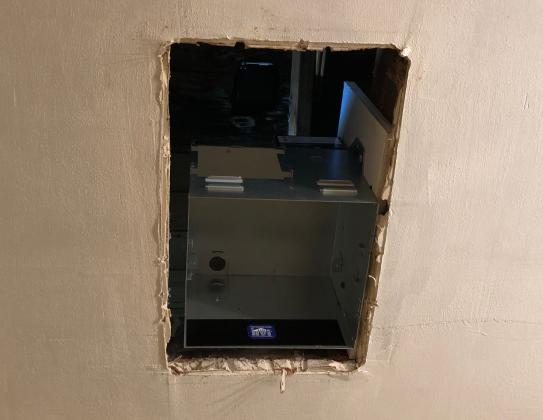 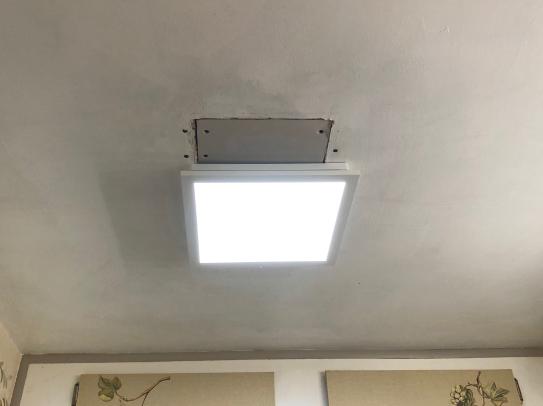 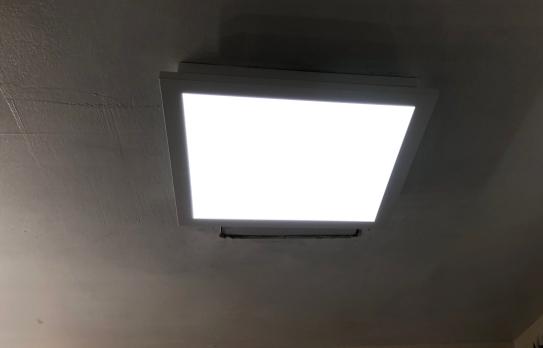 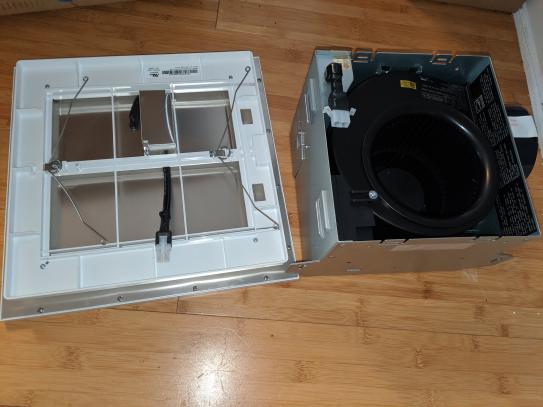 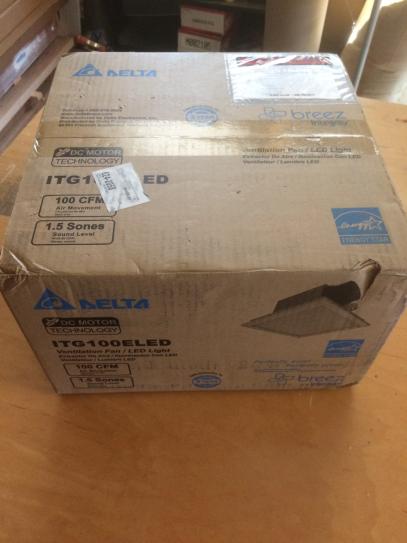 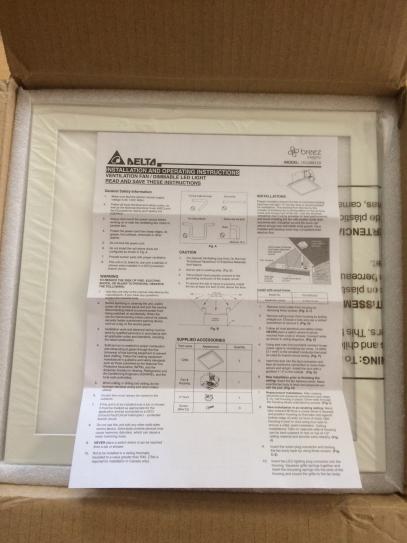 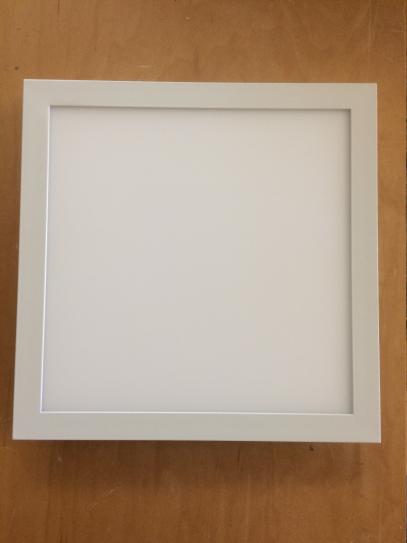 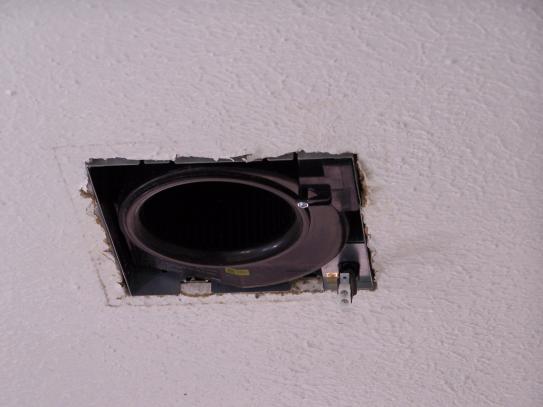 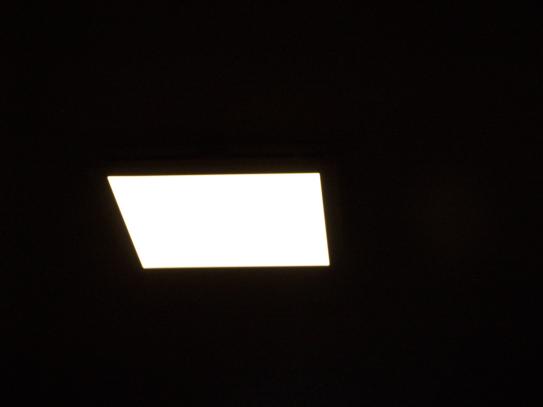 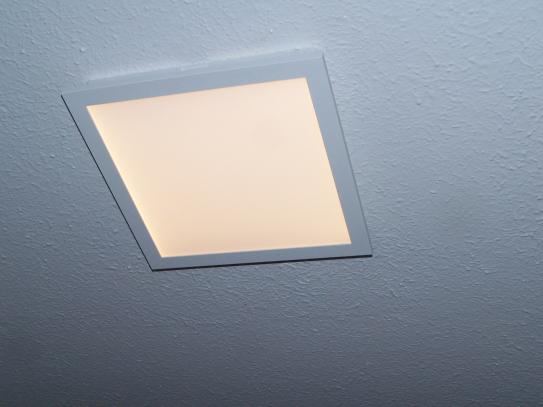 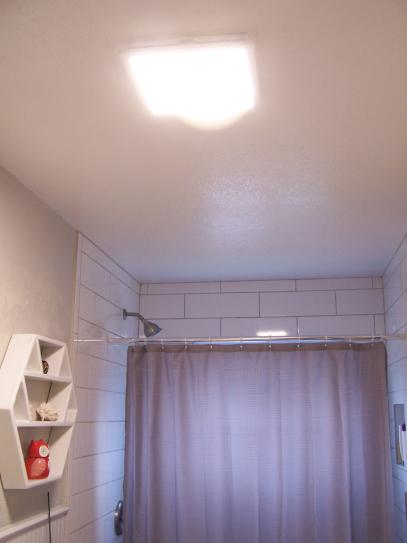 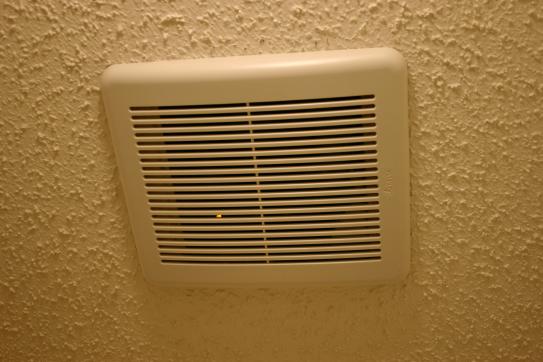 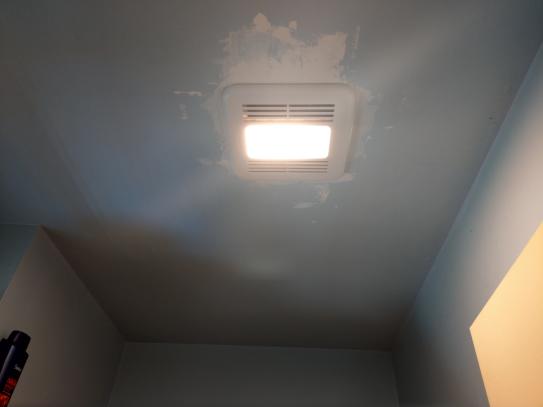 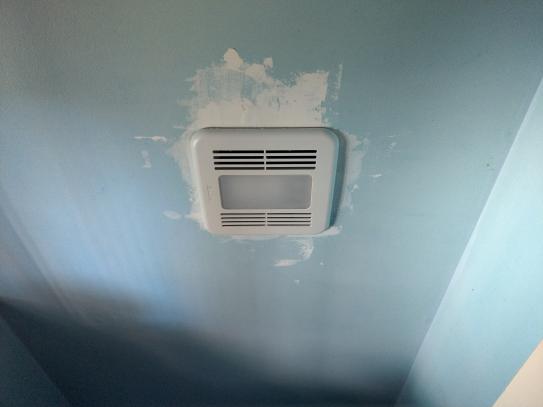 Quiet and functions well ... but a bear to install due to design flaws. The housing for this product had to have been designed by a novice -- fresh out of high school. 1. The removable duct connector on the housing is *exactly* 4 inches. The rigid duct in the bathroom ceiling was also *exactly 4 inches, so the two could not be directly connected to each other without purchasing an extra part that cost more than $10 (up to $18, if I bought it at Home Depot) to connect the 2 ducts together. If the removable duct connector on the fan housing had been tapered so that it narrowed down to 3-7/8 or 3-3/4 inch at the smallest diameter, it would have saved me hours of going to multiple hardware stores searching for an unnecessary part. 2. The metal housing contains holes for nailing or screwing the housing to a wooden board in the ceiling or wall. My problem was that for the removable duct connector to be pointed towards my existing rigid duct, the part of the housing that would be against the 2x6 in my ceiling did not have any nail/screw holes on that side. So I had to drill my own holes in the *very* hard housing's metal. So what's the big deal ? That same part of the housing had other "holes", sort of like large grill work. These slots were covered up with a sticker giving some kind of warning, I think -- I don't remember any more. These long slots were way too big to use as a screw hole, so I had to find somewhere else on that side where my drill could still reach in to drill 2 or 3 holes. Not an easy task, and I was forced to choose spots close to the edges yet fairly close to the main opening. Once I drilled the holes, there was a protrusion on the inside of the housing that interfered with my screwdriver, so it took me about 20 minutes or more to screw in each screw, turning the screwdriver only 1/16th of a turn at a time. 3. The orientation of the grill cover does not match the orientation of the housing. By this I mean that the long side of the grill cover goes across the shorter side of the housing, and the design of the grill-to-housing connectors do not allow one to choose which way the grill is connected. I was careful to order this product only after I confirmed that the dimensions of the grill would cover the same sized grill of the previous fan. (The previous home owner had painted the ceiling and the old fan's grill left an ugly dent into the paint and ceiling wallboard, and I wanted the new grill to cover up this ugliness.) Since I was forced to install it so the fan's duct connector was pointed towards the existing rigid duct, I couldn't just rotate the housing 90 degrees. It took me a couple extra days to sand, spackel, sand, spackle, sand and paint the ceiling around the hole for the fan. Once I did all of this extra work to get it installed, it worked fine and it is quiet enough. I have no complaints with its function and operation. I would recommend it to anyone doing *NEW* construction. If you are replacing some other previous fan, check your requirements -- including the fan's orientation with respect to any existing duct, hole size, and wooden beams -- very carefully. Otherwise a 2 hour project could turn into a week long project.

15 out of 15 people found this helpful
more details...
By: Overworked

The Delta Breez has a 13-Watt dimmable LED light (equivalent to a 60-Watt incandescent bulb) with output of 1000 Lumens, 3000K color temperature for a soft warm glow, dimmer switch is not included. 1.5 sones makes it almost impossible to hear. This was a replacement for an inefficient loud cheap contractor’s unit. The warm light makes a bubble bath more inviting than the harsh vanity lights. I did manage to change out the two without having to crawl across the attic. The most difficult part was installing the motor into the housing; the three mounting screws were not willing to go into their mounting holes easily. My son came over and his better eyesight won out.

Pros Easy to Use, Looks Great, Lots of Features, Stylish

I purchased two of these units. The Air Volume and Sones are as specified. Product quality is generally fine and as excepted (thin metal and mostly plastic). Giving a rating a three stars because the instruction are horrible and not clear. The unit can be wired in three ways, which was not clear in the instruction or on the box. 1) Wired on full power bypassing the humidity sensor (Black wire only). 2) Wired to use the humidity sensor (Blue wire only). 3) Wired with two power sources (switches) so it can use a combination of both 1 and 2 options. The instructions for the LED light indictor is unclear. Amber is 100% fan power. Blue is humidity sensor. It will not change back and forth, as far as I can tell. In the instructions, there is reference to a Full Speed Mode. I have no idea what that referring. There is not a button for that feature, assuming that it is wired as option 1. The RH and CFM switches only work when wired was option 2. For the CFM, 0 is off and 50 is fifty power when power is on.

8 out of 8 people found this helpful
more details...
By: HomeDIY

If you're looking for a unit that uses an actual light bulb, don't buy this one. The spec list says that it uses a GU24 bulb. It doesn't. It has a integrated LED light panel. Not what I wanted Why can't the correct specs be listed?

Excellent fan! A bit of a challenge to install, given I had a 3inch exhaust pipe, so I had to buy a step down adapter from 4inches. It would be great if the manufacturers printed the exhaust pipe sizes on the exterior of the boxes and suggested purchasing a step up or step down depending on need.

7 out of 7 people found this helpful
more details...
By: Jon

I took a picture of the back side of the light so you can see the genius of the design. This fan doesn't have any of the usual big ugly grills, and it's able to use a huge LED light because of that. The plastic housing/bezel creates an air space around the light that the fan uses as the input. It's able to clear the steam and smells out of our master bathroom with ease, I would guess the room is 10x6. At 1.5 it's fairly quiet and doesn't bother use, and it can exhaust 100 CFM. That means it can replace all the air in our bathroom in under 5 minutes!

Quiet, bright, and easy to install; I'd do it again, if I had attic access in our other bathrooms. The challenge was removing the old fan, which required attic access to remove the builder-grade housing. This is also a more-modern look than the old fan. My only concern is the promised longevity of the sealed LED light: It appears to cost more for the integrated light/cover than half the cost of the entire fan.

4 out of 4 people found this helpful
more details...
By: SAGOFF

Crazy quiet bathroom fan, what a dramatic improvement over those old models and with the added bonus of energy efficiency. Compact in size while still delivering 70 CFM. The Bluetooth speaker is a fun addition that easily pairs with most any devise. Listen to what you want while disguising that singing in that shower with real music. Dual switch control to independently operate the fan and the speaker. Have concerns about the steel housing rusting in the future but it has a 3 year warranty. Straight forward install, good working unit.

I receiver the DELTA BREEZ 100 CFM INTEGRITY BATHROOM EXHAUST FAN WITH EDGE-LIT DIMMABLE LED LIGHT, WHITE. I had the fan put in by a contractor, I usually do my own work but have a knee problem. The fan was easy to install it took the man about 1 1/2 hours to do it. The results are great, I can not believe how quiet the fan is and still move a lot of air. The light is brighter than the old two bulb light, but not glaring. I'm very happy with the light/fan.

Williamstown, NJ
65 or over, Male
4 out of 4 people found this helpful
more details...
By: HomeDepotCustomer

The construction and durability of the fan is very good. Even the plastic parts seem adequately sturdy. The hardest part of the installation was connecting the fan to a new exhaust duct. Prior homeowners had no exhaust duct work, so I had to buy new duct work and extensions and a cap so that the bathroom vent could direct the air upward and outward instead of just blowing into the attic and insulation. After pre-assembly of the duct work (which took quite a bit of time), attachment to the fan was relatively quick and easy using Nashua foil tape. Attachment of the wiring was a little hard, trying to hold the fan body unit up while trying to connect the wires but I eventually overcame and completed the task. It was noted that there were no wire connectors provided. Thankfully, I already had some in my home tackle. I drilled three hole into the joist and connected the fan body to the joist with long screws (also not provided but I had some good wood screws that did the trick). The inner electrical connection was easy via a provided plug-in. The light kit was equally easy with a wired plug-in and spring-wired connectors for the lighting fixture itself, enabling easy push up and into place to complete the project. I love this fan because: 1. The fan does a great job of drawing steam and odors out of the bathroom with very little sound. The sones on this unit are very low. 2. The light is bright and awesome. It really helps brighten the bathroom allowing folks in the shower to see better. I wholeheartedly recommend this fan.