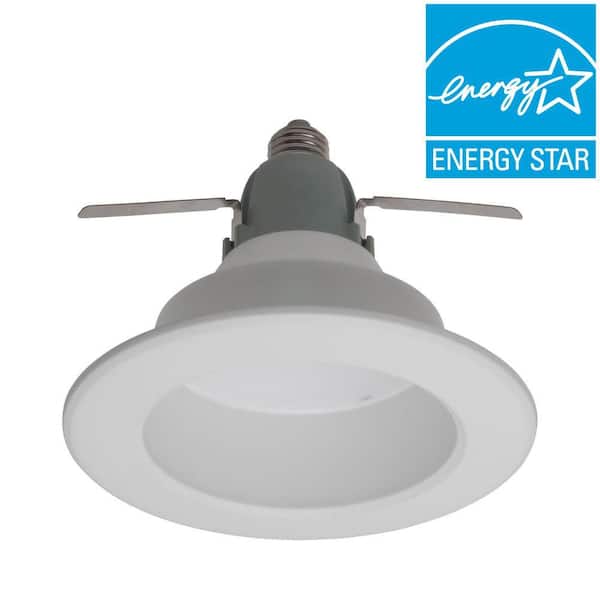 7
Filter by:
Showing 1-30 of 38 reviews
Aug 12, 2015
Not as good as i thought
I have had good luck with these lights in the past, however this time the one i bought would occasionally go out. I would have to get up to the light and unscrew it from the fixture to reset it which is very inconvenient being they are in 12 foot ceilings. I guess this one might have been a lemon. Overall its a good light.
by
Aug 9, 2015
Easiest LED Retrofit Kit EVER!
I was able to convert all of 4 of my incandescent canister lights over to the EcoSmart LED with the retrofit kit in less than 10 minutes. As a bonus, my local Home Depot had them on sale in a 2-pack that shaved the cost down to about $13.75 each. Given the frequency with which I was replacing burned out light bulbs, coupled to the lower electricity consumption of LED's, I expect these kits to pay for themselves within the year. If you are in looking to convert your old canister lights over to LED, I most enthusiastically endorse these kits by EcoSmart. There are other kits like these that employ thin metal blades that hold the LED in place inside the canister-- GREAT DESIGN. Avoid any lights with the four spring-loaded arms that need to slot into the canister spring retention clips. Not only are these infinitely more difficult to install, the weight of the ballasts resting on the top of the unit will prevent the light from mounting flush to the ceiling.
by CH6
Jul 27, 2015
Easy install
Purchased 2 of the 65 watt soft white BR30 LED downlights for existing 5" housings and was impressed at the ease of installation to replace 65 watt incandesent bulbs. The expected electric savings w/ the LED bulbs is an added bonus.
by PappyB
Jul 23, 2015
Great looking light bulb
This light works well, looks like it belongs in the fixture, come's on full bright instantly (unlike the compact fluorescent bulbs), the color is truly warm white so the light resembles an incandescent flood light. My only complaint is: compared to a contractor pack of incandescent flood lights it is a very pricy light bulb.
by HomeDepotCustomer
Jun 25, 2015
Less Capable Replacement
I needed to replace a EcoSmart ECO-575L 6" downlight that burned out. Unfortunately, that model has been discontinued and replaced by the ECS-DN6-W27-E26-120. My circuit contained 2 downlights and was controlled in a three way application. I am using the wireless Lutron Caseta in wall dimmer for lighting control. After replacing the burned out downlight, I was not able to get the new light to turn on. The 2nd light in the circuit came on fine and dimmed properly. Thinking I had a purchased a defective light, I tried it in a lamp and it worked fine so it must a fixture problem. I checked the voltage at the fixture and had 110V, so that was not the problem either. I then installed a regular Cree 65w LED bulb and that functioned normally including dimming. After calls to both Lutron and Cree to troubleshoot the situation and the obligatory finger pointing back and forth, I was instructed to replace both the lights in the circuit with the new model. Upon doing that I found that neither light functioned. So I removed a ECO-575L from a different circuit in the house and installed this one in place of the new model and reinstalled the other ECO-575L, so I was back to the original configuration before the burnout and everything functioned nominally. Unfortunately, this points to the fact that the EcoSmart replacement ECS-DN6-W27-E26-120 is not compatible with the Lutron Caseta dimmer and is a less capable product compared to the ECO-575L.6" downlight.
by KDP
3 people found this helpful
Jun 4, 2015
Great item, I replaced 36 recessed lights with this product.
Easy to install and it seals the helmet so no cold air comes down from the attic.
by jaytee
1 person found this helpful
Jun 1, 2015
Great bulb...but
These bulbs are a great way to clean up a regular can light and give it a very sleek look. My only problem is that although the package says "dimmable ", it's dimming range is limited. I was replacing four incandescent recessed bulbs in my living room. With my dimmer switch the incandescent bulb was able to dim all the down to practically OFF. The new Led lights only dim to about 50% of their full brightness. Considering these lights are very bright and have great lighting coverage, the dimmable abilities are not what I was hoping for. I have essentially lost the lowlight functionality in my living room
by Rexbizzy
Apr 21, 2015
easy
Easy to install and looks like a regular recessed can light
by MARK
Showing 1-30 of 38 reviews