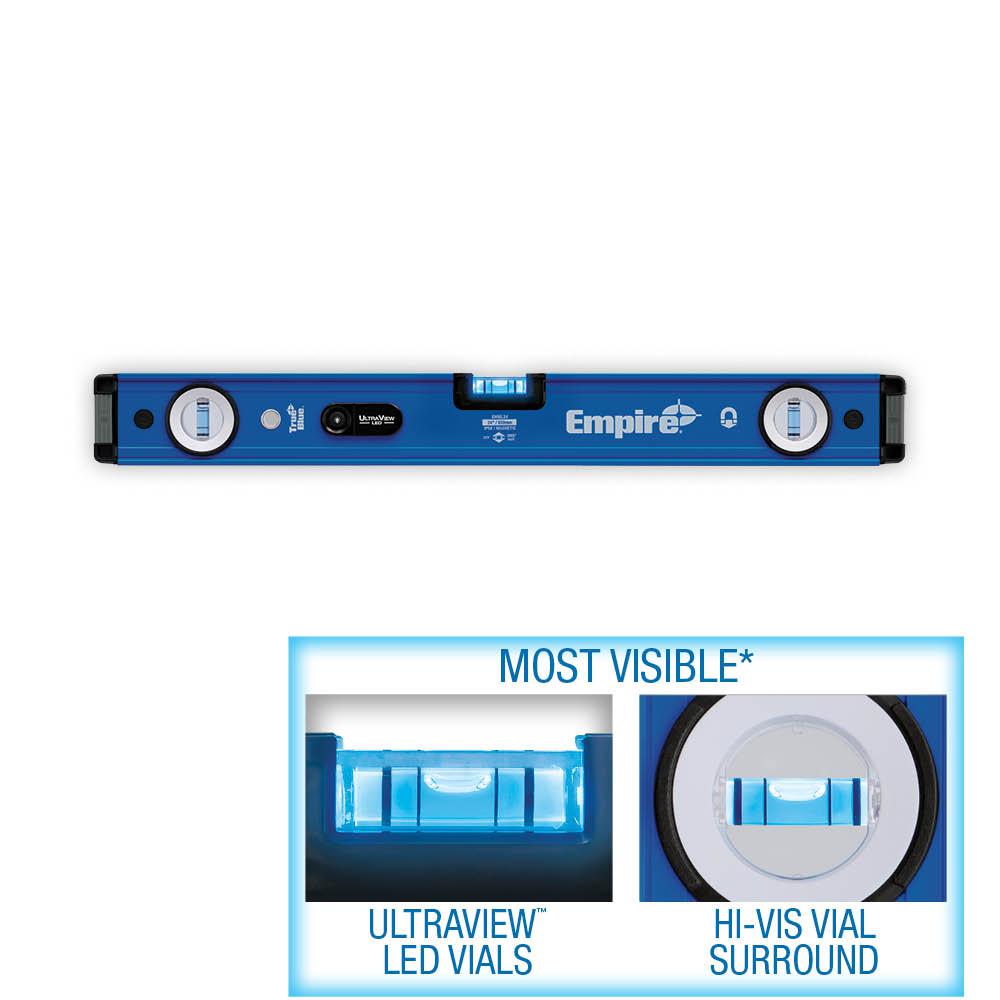 The empire stikes back
January 11, 2017
Quality :
5
Value :
5
Seeds Program Review
(What's this)
I ordered this directly from the homdepot site and when I got it. It appeared solid and vary sturdy feel a good addition to my 48 inch empire level. Many kinds of uses in both day and night time. The empire levels magnets hold secure to steel. It is good for construction and maintence of metal structures. I use in lit places or dark checking plum level of metal poles and for rehab project of my old 5th wheel rv
Pros: Accurate, All In One, Durable, Easy to Use, Good Size & Weight, Strong
Was this helpful?
2
0
MacEwen
Buffalo, NY

Very solid level. Lights actually help.
December 6, 2016
Quality :
5
Value :
5
Seeds Program Review
(What's this)
I'm happy to have the opportunity to use and review this level. I was looking at maybe getting a new level recently, and this came along with LED's. I laughed. I said a few obviously things, like who needs a level in the dark!? Well, last week, there I was, outside, after sundown, building a deck platform to host a plastic resin shed. I indeed needed, or at least was helped by having an illuminated level. This unit arrive well packaged, and in perfect condition. I unboxed it, and easily just turned it on. It came with batteries installed. It worked on the first click. Illumination is at the level bubble at first click of the button, and the second click was for plumb bubbles. It cycles back and forth, and holding button turns it off. It also will turn off on it's own. The alloy I-beam construction is very solid, and stiff. It has plastic end caps which feel like they will take a few whacks without damage. I like the blue color. The blue illumination color is a nice light blue. It's highly visible. This level proved to be accurate, and a pleasure to use. Definitely, a nifty idea, which proved to be practical, despite my scoffing at first. So cool. I recommend it, since it's got a nice feel, and is accurate. Lights are just a bonus. I cannot say how it will handle water. I did not get it wet.
Pros: Accurate, All In One, Durable, Easy to Use, Good Size & Weight
Was this helpful?
0
0
L111
Los Angeles

Another great Empire level, great to use in dim light
December 5, 2016
Quality :
5
Value :
4
Seeds Program Review
(What's this)
I'm at the point where it's getting difficult for me to see some details up close in dim lighting, so I'm a fan of any tool that comes with its own lighting to make the job easier. The LEDs in this UltraView level really light up the vials, making them glow brightly in dim or dark light, or even when the level is in a shadow. The lights make the vials easier to read and light up each side of the bubble, making it easier to see. The UltraView model has 2 strong magnets on one edge that allow it to hold firmly to a steel surface. While I don't like the smaller hanging hole in the new Empire box levels, I realized that I can use the magnets to store the level by hanging it on something steel. I now stick this level to the side of a large metal cabinet instead of hanging it--it's easier to put away and actually more convenient for me to grab the level now. I'm not really a fan of the endcaps on these new Empire box levels, since they feel kind of cheap. I personally don't have a need to remove the end caps to scribe across a corner, but if that is something that you need, then they are easy to remove and put back on. This level is fantastic, and the LED lights really add value for me.
Pros: Accurate, Durable, Easy to Use, Good Size & Weight, Light Weight, Strong, Sturdy
Was this helpful?
4
0
Mtao16
Fenton

Not just a gimmick
December 4, 2016
Quality :
4
Value :
5
Seeds Program Review
(What's this)
I have and use almost exclusively Empire levels at work and home. I have torpedos on up to 6' levels so the quality is great and on par with my other empire stuff. This is the first LED light level I've had or used and to tell you the truth I only got it cause it look cool so yeah even if it was a gimmick I would still end up with it. What I did not expect was how much I do use it for the LED light bubbles. I didn't realize how long I've gone without something so easy to read. I wish all the rest of my levels had this now. The magnetic feature is a huge plus as well.
Pros: Accurate
Was this helpful?
2
0
L111
Los Angeles

Excellent level, great for use in dim lighting
December 3, 2016
Quality :
5
Value :
4
Seeds Program Review
(What's this)
As I get older, it's gradually getting more difficult to see details in dim lighting, and I now appreciate any tool with lighting that can improve visibility. This UltraView level adds nice bright LED lights to the already excellent Empire Box Level. I think this is a great idea, as it makes the vials easier to read in any light conditions. The LEDs really make the vials glow, and light up each side of the bubble, increasing the contrast. This model also includes 3 strong magnets on one edge that allow the level to hold firmly to a steel surface. I don't typically work with steel, but it's a nice option to have. I have two of the older Empire e-Series, and compared to the older model, there are only two minor changes that I don't like as much. First is the hole to hang the level. In the older e-Series level and the in the current Empire I-Beam levels, there is a reasonable size hole right at the end of the level, and it is very easy to hang them from a screw or nail. Those models are easy to hang from a screw. The new Empire Box Levels only have a 3/8" hole for hanging, and the hole is 6" from the end of the level, which makes it a bit of a hassle to hang from a screw--it's a bit like threading a large needle. I suppose one nice side benefit of the magnets in this model is that instead of hanging the level from a screw, you can just mount some steel or magnets on a wall and hang the level from those instead. I may try that. The other very minor change that I don't really like are the endcaps on the newer Empire box levels. The end caps look and feel kind of cheap, almost like an afterthought. The supposed benefit is that they are easily removable, which they are, allowing the level to be used to scribe a line across a corner. I very rarely need to do that, and when I do, I'm happy to use a laser level for that instead. Other than those two small details, this level is fantastic, and the LED lights really add value for me.
Pros: Accurate, Easy to Use, Good Size & Weight, Light Weight, Strong, Sturdy
Was this helpful?
2
0
Tech1
Coeur D' Alene, Idaho

Easy to use.
November 29, 2016
Quality :
5
Value :
5
Seeds Program Review
(What's this)
I would recommend UltraView LED Magnetic Box Level. The level will work great for any job, big or small. The size and weight are perfect. LED lights are bright blue in color. Shock absorbing edging. Precision milled edges. Removable end caps if needed. 2 AA batteries are included. Comes already assembled. There are times when you need a larger level and this one has everything you need. I am happy with the product and I feel that it is very well made.
Pros: Accurate, All In One, Durable, Easy to Use, Good Size & Weight, Light Weight, Long-Lasting, Strong, Sturdy
Was this helpful?
1
0
Sam
Austin texas

Best lit level
November 3, 2016
Quality :
3
Value :
5
Seeds Program Review
(What's this)
I ordered this from homdepot website and when I got it the box was crushed and level was bent 2-4 mm But I was able to recover it carefully taking out the bend applying. Pressure. On firm padded corner of steel beam and recentered it then began using the level. Good all round heavy duty feel. And lights to use day time and night. Magnetic cling. Makes it good for metal construction. And regular construction best of both worlds in one package
Pros: Accurate, All In One, Durable, Easy to Use, Good Size & Weight, Strong
Cons: shipping lack of buffers
Was this helpful?
1
0
Review this Product
Share your thoughts with other customers