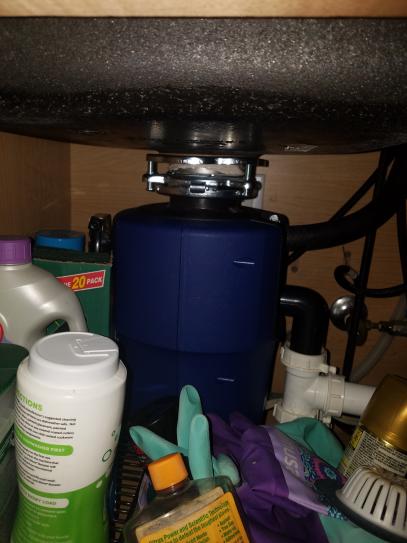 I decided to buy a FGD1753DMS Frigidare disposal due to the 10 year warranty and the competitive price from Home Depot. It takes a week to get it as it is a special order item. Installation was uneventful, except for the immediate post installation leaking of the waste pipe gasket, when running the disposal. (Only running water was fine.) The problem is that both Waste King and Frigidaire use a rubber washer/gasket on the pipe side of the waste pipe flange (not on the mating surface) which is held in place from behind with a soft metal bracket. This results in a plastic on plastic interface between the disposal output port and the waste pipe. Talking to a plumber, he told me that he usually just puts in plumber’s putty to solve the problem, which works for a while. For $3.49, at Home Depot, you can buy an “insinkerator style” gasket which has a cut in it which fits over the waste pipe flange edge. This provides a seal between the disposal output port and still provides gasket material between the back of the flange and the metal bracket that holds all this together. Since doing this I had no leaks. (FYI, the waste pipe is extremely flimsy.) When I called Frigidaire about the leaking problem, no one was available that Friday because they were all out on a company event. No one was on call. When did get through eventually, I was told that there were no parts available for this unit and my only remedy was to return the entire unit for a new one. This will not solve the problem of the plastic on plastic problem. If I return this unit, I have no sink usage for at least a week, otherwise, I have to pay for two and hope that the warranty is honored. The service people had no interest whatsoever in doing a root cause analysis or doing with any kind of preventative failure work. I have seen three different manuals for the same product, with different sets of information, none of which have a gasket as a spare part. I was unable to elevate the issue to anyone that seemed to care about improving the Frigidare products. So far, the disposal has a low growl when it works, and I don’t know if anything else is wrong. I have another one to replace and will probably pick another manufacturer, who does not have leaking problems right out of the box ,and who is interested in customer feedback.

7 out of 9 people found this helpful
more details...
By: DYIer

My only real drawback to this product is how loud it is. Just makes to much noise compared to other disposals I've owned in the past. Other that that, its a great product.

Aptos,Ca
65 or over, Male
2 out of 3 people found this helpful
more details...
By: qictrk

Very nice haven’t installed it yet

Makes a lot of noise when on. My son had no trouble installing although he’d never done it before.

It is not as powerful as the Insinkerator I had previously, despite being the same specs and hp. And it operates like a batch disposal because it can't handle much at one time, despite being continuous. It is sufficient to do the job, but I definitely would not recommend this to anyone who frequently uses their disposal. It is also pretty loud.

Takes forever to grind food and water backs up every time it's used. It's a very poor excuse for garbage disposal

This unit was much larger than the old disposal. I ended up having to cut some of the pipe to make it fit, but that is to be expected. The unit is strong and quiet with the exception of the magnetic start which at first I found to be startling.

I had to return the disposals because they were too big for where I wanted it installed. I was sent two, I ordered only one. The online person I dealt with was not on top of the situation. That was a poor experience for me.