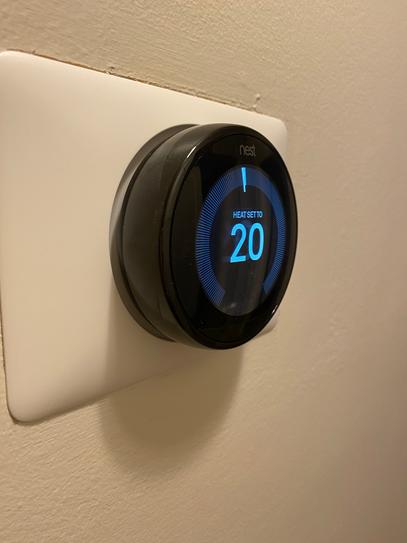 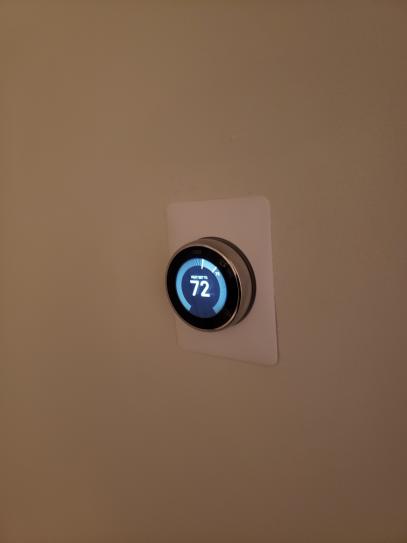 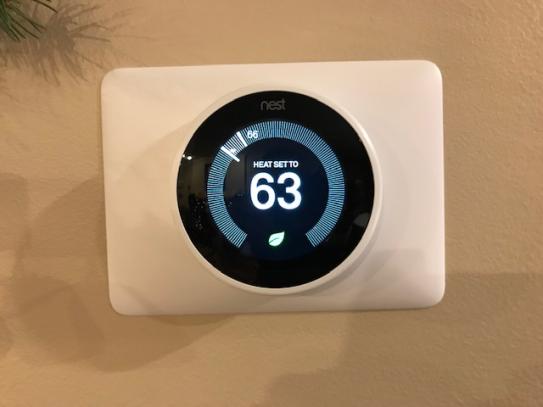 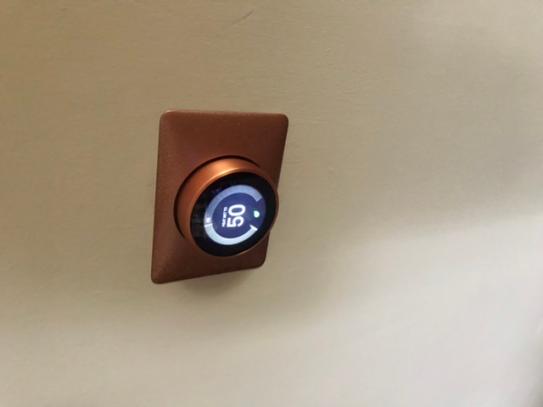 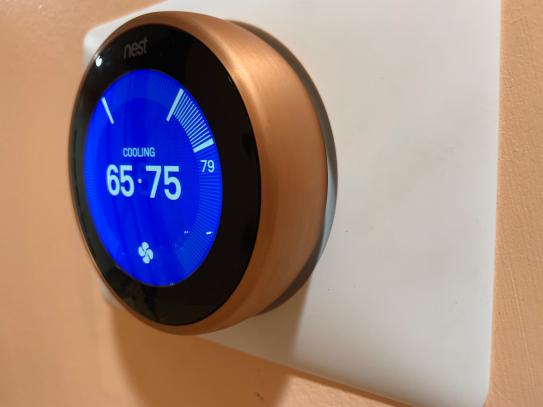 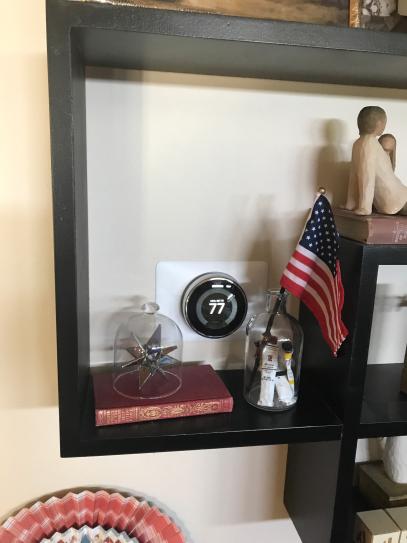 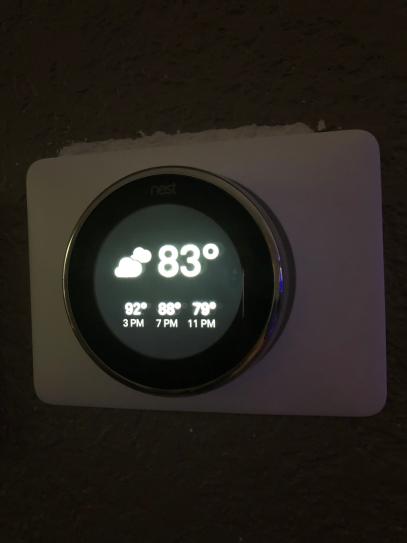 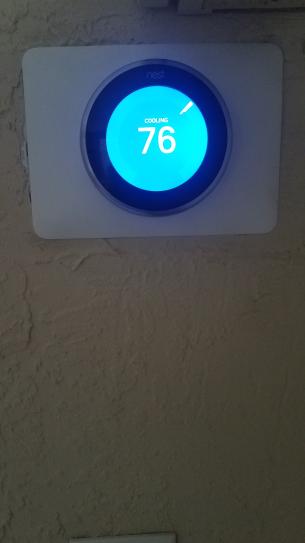 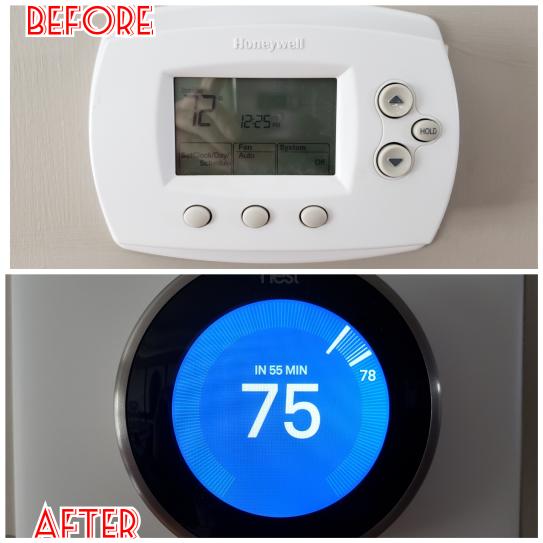 Upgraded from 2nd Generation Nest. The installation was even easier this time. Although the product screen is larger, I was expecting to have to drill more holes in the walls. Nope. All I had to do was level and connect. Couldn't be easier than that. Looks great--er, better than previous. Still I have one minor gripe. My Wireless Network is hidden and has a "space" in the name of it. To input it manually takes a bit of time and it drove me crazy the first time to find the "space" through it's character set. But that's the only negative for me, personally. If you are considering buying one and only need a generic thermostat, don't buy it. However, if you like technology at it's finest, look no further.

The Nest was one of the first things we bought with the new house. Literally took 15 minutes to install and be up and running with internet service connected. The first couple of days are a little wonky as you teach it your schedule, but it learns it and gives you the times on the app. The app is best seen on an ipad so you can read all the schedule programming at once. We are out the door by 7am, back home at 6 or 8pm and in bed by 11pm. The Nest knows it and sets the temperature to your liking. Even when you come home unexpected, just walking by the thermostat will kick it on as it senses that you are home. I'm not kidding when I say my electric bill is about $65/month October thru March and the highest it's ever been is $135. That's crazy talk for living in Florida where it's routinely 85 degrees outside. Get the unit, buy one for your mother in law, or sister or whatever. They really work and they do save you money. It's also pretty to look at.

I bought this because the Tru Radiant feature was supposed to figure out when to turn on my in-floor radiant heat to reach the programmed temperature at the programmed time. It doesn't work. It acts just like a dumb thermostat, turning on the heat at the programmed time. I called support, waited 30 minutes on hold, and had a guy literally read me the marketing literature on what the thermostat was supposed to do, then he told me to give it a few more days, even though the auto schedule feature was turned off. I called support again today and they again have "unusual call volume". So much for the 24/7 support. I emailed support 2 days ago, but no reply. I found a long thread in their Community from owners who said the pre-heat feature hadn't been working since early November. Bottom line is that it does not work as advertised and is poorly supported. I'm returning it today.

Pros Nice Design, Easy Installation Cons does not work as advertised, no support

I have had 3 NEST Gen 2 thermostats for more than 2 years. I love the concept. I love the UI. Their quality is poor; their reliability is poor; and their care for their customer is atrocious. Here is the litany: My first went in flawlessly and worked great for a year (more on that one later!!). My second failed out of the box. I had bought 2 at a time, fortunately, so I was able to troubleshoot by substitution pretty well, but it took close to three hours on the phone (2 or 3 calls) before I was able to rectify the situation and finally get NEST to send me a replacement unit. It turns out that the baseplate was defective even prior to shipment. Bad quality control. Fast forward one year to the first NEST again. My AC failed, requiring an expensive service call. After a couple of hours of trouble shooting the problem it turns out my heat pump was fried. Fortunately, that was replaced by the manufacturer under warranty (less than 1 year old). Further troubleshooting showed that the NEST was sending signals to the heat pump causing the AC to short cycle. NEST admits that this will happen if there is no common wire in the set up (they don't tell you that up front!!!). However, in my case, there WAS a common wire in the set up. NEST finally did send me a replacement unit for that thermostat, after lengthy argumentative phone calls. CAUTION: NEST CAN CAUSE YOUR HEAT PUMP TO SHORT CYCLE, CAUSING PERMANENT DAMAGE TO THE UNIT!!! Now, fast forward one year more. This same unit failed again, this time after an admitted voltage surge in the house from a lightning strike. Another expensive troubleshooting repair call later, we replaced the thermostat with a "vanilla" (non-NEST) unit and there is no problem. 2 one hour phone calls later with NEST again, they concluded that the base plate had failed, but, since I was a month or two out of warranty, they would not supply me a replacement base plate, only offering me a 20% discount off a new unit (an identical offer I had received in a promotional email they had sent me that week, coincidentally). I can get replacement parts or repairs for any other piece of electronics I own. Its clear that the company has no regard for their customers. Conclusion: NEST is a great techie product - meaning slick for gadget lovers, like me - but has horrible reliability, quality and even worse customer service.

8 out of 8 people found this helpful
more details...
By: Scatterplot

I was a bit hesitant to pull the trigger on this purchase given the initial purchase price. However, the great deal that showed up Black Friday (HD $50 gift card with online purchase) made it a no brainer. After tax credit and rebates, the net price will be less than $150. I was mainly looking for a unit that would run the blower automatically so I didn't have to run the blower all the time (I like to circulate the air in the house). Now I can run the blower 15 minutes every hour and not run it at all during sleeping hours. The unit is super easy to install. Everything is included and the instructions are complete and accurate. I opted to fix the wall where the old thermostat was mounted so I didn't need to use the included cover plate. Initial setup is a breeze. The setup wizard walks you right through necessary steps. The remote access via Wi-Fi is nice. The app will allow you to do everything remotely that you can do right at the unit. This is great if you want to play with the Nest settings while you're watching TV. Where Wi-Fi is invaluable is if this is installed in a vacation home. "Programming" was easy. Just set the temperature you want and the unit will learn your preferences after a few days. I have seen some complaints of the unit automatically setting the "away" temperature if motion is not sensed for a time. The "away" setting can be set to off. We did this because someone is home all day but not necessarily walking past the thermostat. No issue as far as I'm concerned. I'm looking forward to trying out the features for cooling when summertime comes around. Overall I'm really happy with the purchase.

Purchased this product Dec. 2017 and recently our Nest displayed "low battery" and stopped connecting to WiFi. We charged the battery using USB several times but the battery would only partially charge and we still couldn't connect to WiFi and the manual display would sometimes work and other times we couldn't get it to display anything. We then replaced the battery and it didn't make any difference so we called Nest Support. After trouble shooting on the phone with them for several minutes our support person talked with a supervisor who said they would no longer trouble shoot with us because we had changed the battery (which is exactly the same as the original battery). I think it is possible an automatic software update caused this issue and I'm very disappointed that Nest isn't willing to support their products. This is the last Nest product I will ever buy.

6 out of 6 people found this helpful
more details...
By: Unhappy

Worked fine for several months than all of a sudden stopped connecting to WiFi. Reset it multiple times with no luck. Called Nest and never did get through to anyone even after holding for over an hour. Buy a different brand - thats my suggestion

This is the biggest piece of junk I've ever used. It won't let you just set temp and leave it . It's always learning and adjusting on it's own. It's also motion sensed where if it doesn't sense motion the temp gets set unreasonably high. We have two dogs a husky and a German Shepherd. We left for 6 hours today to a party to cone home to a temp of 88 . 88 in most places is not bad. We live in Arizona however where 88 feels horrible in a home when it's 110 outside. Do not buy this if you want to set a temp. I've tried everything and nothing works. It is pure trash

4 out of 4 people found this helpful
more details...
By: Nik

At first I was hesitant to purchase the Nest. I have 2 adult children who are in and out at different times of the day (and night) and I was worried about the Nest learning what my desired schedule actually is. Once I realized I could control it from the app on my phone, I decided to purchase it. Now I'm glad I did. It has learned my schedule and hasn't been affected by my children's' schedule.

4 out of 4 people found this helpful
more details...
By: smsmkm

I was in need of a new thermostat for years. My coworker told me about The Nest and I was hooked. Went to Home Depot at lunch that day and installed it myself that evening. Very user friendly.