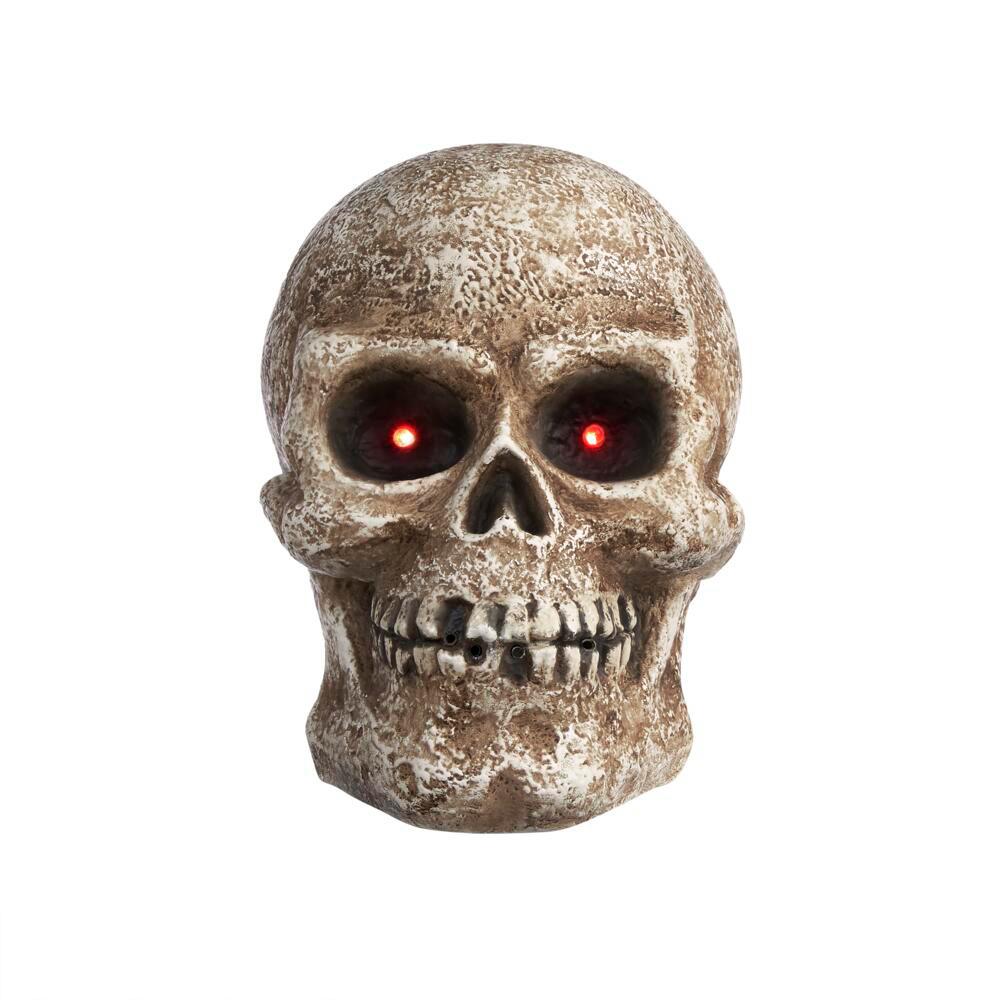 September 13, 2019
Quality :
5
Seeds Program Review
(What's this)
I received a new decoration for Halloween today, this large skull made by Home Accents that makes some very spooky sounds, has flashing LED eyes that are red and can hooked up to a fog machine ( I currently don’t have one, next on my list to buy. It looks a lot larger than the 13.5 inches and has about an 11 inch depth. It’s battery powered and is going to look fantastic sitting on a snack table that is draped with black material. I found that it is very well made and would highly recommend this product.
Pros: Looks Great, Well Made
Was this helpful?
2
0
Halz509
Greenville
Not worth it
October 24, 2020
Quality :
2
Value :
2
Looks great when it is all hooked up and working. In my opinion, for the cost of this product, there are too many other pieces you have to purchase to get it all working as you'd like. I purchased the fog machine, gallon of fog, the accessory hose to connect the skull to the fog machine. The hose I bought from Home Depot for $20 was not the correct type of hose needed for the Skull. Found the correct accessory hose for $10 at l0w3s . Then the fog machine works separately from the Skull. So although the skull gets triggered / activated by motion / sound, the fog machine doesn't automatically kick in and produce fog to go with the skull lights and audio. The particular fog machine I purchased came with a remote to activate the fog machine. So I have to stand within range of fog machine and press button on remote to make fog turn on and try to time it with the skull being triggered. If I wanted to spend an ADDITIONAL $15-$20, I could purchase a timer attachment for the fog machine, but still would only be producing fog every XX amount of minutes. For $30, you'd think there was someway to have skull trigger fog machine to produce fog when skull is triggered.
Cons: not automated fog
Was this helpful?
0
0
Shelly
Great addition to my Halloween decor!
October 23, 2020
Great addition to my Halloween decor!
Was this helpful?
0
0
Dj
Do not buy. Many are Defective
October 13, 2020
Quality :
1
Value :
1
Bought one. Defective. Returned for another. Defective. Tried one more time, bringing screwdriver and batteries to the store to test before buying. Tested 2 more. BOTH DEFECTIVE. Should be removed from shelves. Forever.
Was this helpful?
0
0
Xrayest
HUGE skull with sassy words
September 26, 2020
Quality :
4
Value :
4
First I have to say I had to exchange my first two skulls since the initial one had a missing LED eye, the second one did not work at all (not motion sensitive at all once new batteries were placed). The 3rd one I picked up works extremely well as a sassy, lighted, and speaking skull - I can not attest to the fogging feature as I do not own a fog machine (yet). My skull is plenty loud but there is no actual "screaming" going on - there is a bit of moaning. Basically any "motion" sets him off : walking past it, snapping your fingers next to it, turning a light on near it, my dog sniffing it, etc. His red LED eyes then start to blink and a disembodied male voice says " Ha ha ha ha...don't be afraid, I won't hurt you"....meanwhile another manly voice moans "ahhhhh, ahhhhh", followed by the original cast member voice laughing menacingly. Hilarious! I can only hope the fog works as well as this spooky skull if I hook up one of those. The volume is pretty loud so I left the sticker over the speaker to soften it a bit. The only way this could be better would be if it said more than one spooky saying. Overall I do recommended picking one up despite a bit of quality control issues (not really surprising there). It is HUGE by the way - so check the measurements.
Was this helpful?
0
0
bailey
ehhh
September 16, 2020
Quality :
2
Value :
3
i got to use it for one halloween so far its cool looking and its big but the battery box fell inside the skull it can be fixed but still shouldnt have to fix somthing you only used one time
Was this helpful?
0
0
Review this Product
Share your thoughts with other customers